Are these maggots and are they okay in the soil around the roots of a fruit tree?

There are a number of fruit trees in this backyard orchard. The "maggots" are only around the Arctic Star (white nectarine). 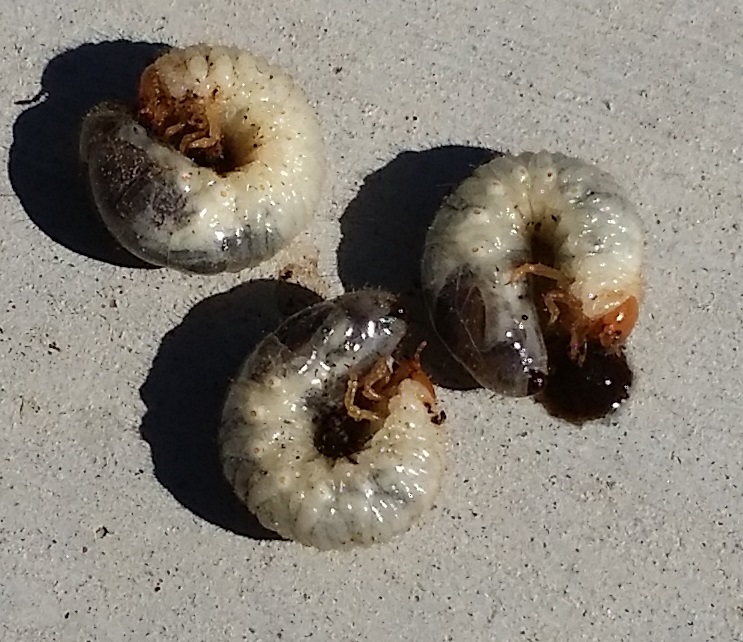 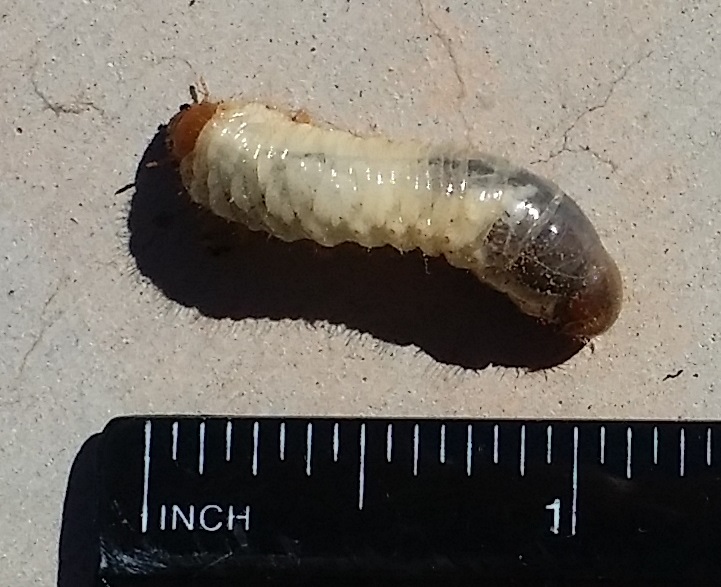 Those are grubs. There are a lot of kinds of grubs, though, and they look so similar, you often can only tell them apart by their rear ends (seriously, see below)

They feed on roots (usually turf, but also trees, perennials, and other plants) as larvae, and then emerge from the ground as beetles, which feed on the leaves. I think they might be masked chafer beetles. You don't yet have Japanese beetles in Phoenix.

For grub control, timing is key. The grubs live low in the soil most of the year, below where you can effectively treat. They come up near the soil before pupating, and then when the adults lay eggs, the new larvae start out near the surface before going down. So you need to apply right in that pupae-flight-egg window.

Here's a helpful chart. It may vary according to your location:

Here is some additional information on grubs:

I love chickens, but let's not forget beneficial nematodes:

From The Royal Horticultural Society

You can buy pathogenic nematodes, Heterorhabditis megidis or H. bacteriophora, which attack the larvae by infecting them with a fatal bacterial disease. These microscopic animals can be watered into the lawn when the ground is moist and soil temperature range between 12-20ºC (55-68ºF). This biocontrol is available by mail order from some biological control suppliers or some garden centres. The turf around the edge of affected areas should be targeted to deal with larvae spreading out from infestation “hot spots” in the lawn. However, by the time areas of infestation become apparent, the soil may be too cold for nematodes to be effective. As a preventive measure, apply nematodes in July to September against chafer grubs. Nematodes should be applied as soon as possible after purchase, following the suppliers’ instructions for use. It may be necessary to water the lawn before and after application to ensure the soil is sufficiently moist for nematode activity and survival.

I have not personally used nematodes, but two organic plant/turf care companies that we work closely with report excellent results. It is, however, more expensive than the chemical route.

Those are Grubs. Grubs are the larvae of Japanese beetles, June beetles, and chafers, among others. These C-shaped creatures feast on the roots of grass and plants. They pretty work similar to root maggots, which also feed on the root system of plants. A few grubs in the garden aren't usually a problem, but if you notice lots of grubs when you turn the soil it may be time to protect your plants by taking action. Apply a grub control product labeled for use around roses, flowers, trees, and shrubs to help protect them from hatching grubs.If you're someone who loves to fish, dig them up and go fishing. They love grubs. They are both destructive. I will go ahead and assume grubs and root maggots can be treated in a similar fashion.

Not the answer you're looking for? Browse other questions tagged identification pest-control pests pest-damage or ask your own question.

8
What to do about grubs in vegetable garden and potted tree?
9
How do I get rid of lawn grubs?
3
Sodding a grub-damaged area in Southwest Florida
3
Can you identify this grub?

7
How do I control fire ants in the mulch around my tree?
2
What are and how to prevent these maggots in my lovage?
8
Need some help identifying a plum tree
1
Are Seibel 13053(aka Cascade) grapevines phylloxera-resistant?
2
Ants, birds or another insect eating the fruit?
4
What are these pests that are eating my pomegranate roots, and how can I control them?
3
Help identifying pest
2
What kinds of larvae/maggots/worms are these?