How can I help my young mulberry tree grow a thicker stem?

I have my young mulberry tree, which is a little more than a year old. I grew it from a seed, and have it indoors in a large pot at the moment.

It is growing tall and thin, it even needs a stick to support its weight, so my question is:

How do I make my tree develop a thick stem?

Is pruning the right way?

Also, as you can see at the photo, is has developed two long branches from the short stem. Should I remove the youngest of them? Or some of the shoots?

I have no experience in growing and pruning trees so all advice will be helpfull.

I live in Gothenburg, Sweden. 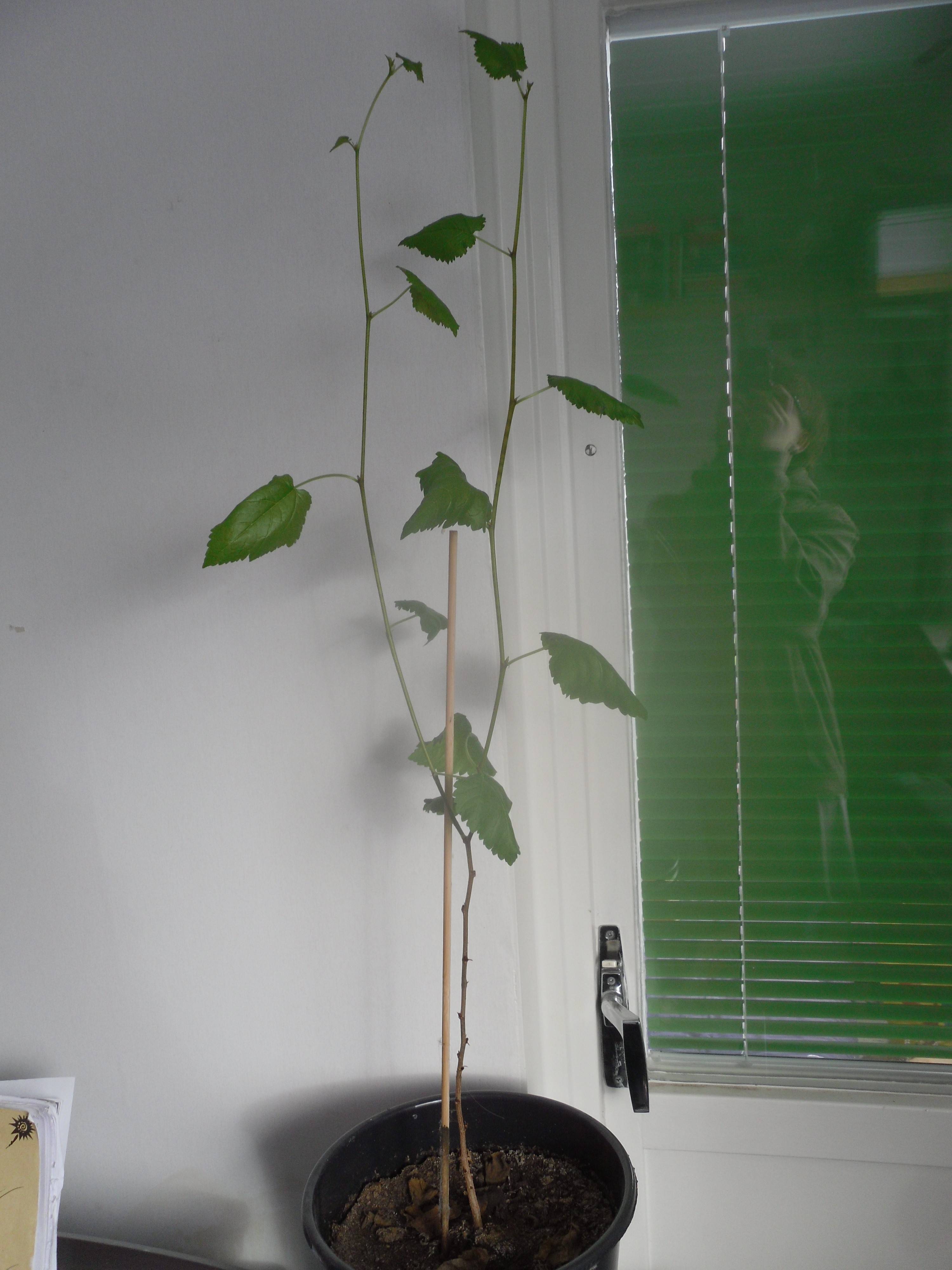 Etiolation, or insufficient light strength, is a partial explanation - this tree is deciduous and normally would be dormant at this time of year. However, the process of thigmomorphogenesis is also missing. Thigmomorphogenesis refers to movement - when a plant is outside, particularly one with a tall, woody stem, it will be exposed to air movement. That air movement might vary between a gentle wafting breeze, or a force nine gale, but the movement of air means the plant develops a much thicker, more resilient stem or trunk. It's the reason trees are not solidly tied to a rigid stake from top to bottom when planted, to allow some movement to take place.

I imagine where you live that warmer weather will not arrive for another two or three months, but when it does, move the plant outside for increasing periods during the day to gradually harden it off, until its warm enough to leave it outside overnight. After a week or so of that, and a degree of certainty that the weather is now balmy enough for the tree, plant it somewhere as sunny as possible, and fairly open, but not in an extremely windy spot, given its current condition. Prepare the planting area beforehand by digging it over well and incorporating compost or humus rich material such as composted manure.

You will, unfortunately, have to wait for the tree to become fully dormant to carry out pruning/training, which means at least a month after its leaves have fallen; pruning at other times causes excessive sap bleeding. At that point, if its still looking etiolated, consider cutting back the top parts to try to encourage a thicker trunk. You will need to stake it initially when you plant it out - the stem is so thin there is a high risk of its snapping otherwise.

In the meantime, if you have a fan or a fan heater you can set on cool or cold, and on a low speed, set it near the plant so that the air is moving around it to encourage the stem to thicken, and increase its light levels if at all possible, though I think that will be difficult, given the shortness of daylight hours currently where you are.

That is etiolation. Here's a ginger plant with the same issue. Your tree wants full sun. This tree would prefer to be grown outdoors in the sun. Of course, if it's freezing out right now, I'd wait till spring when the temps don't go under 45 degrees F. or thereabouts, to actually move it. That way you won't have so much risk of shock/cold damage. Don't prune it. It needs all the green surface area it can get right now.

Choose a sunny spot, and if you can, get it in the ground. These trees like to get big, and trying to maintain one in a pot is a lot of work. Of course, it will need to be staked at first, until the stem fills out.

Other than the etiolation, the plant seems to be in good shape. I see no disease or pest damage. If it's gonna be a while before you can take it out, try to give it more light. A sunny window would be ideal. Even a bright window (natural light) combined with some fluorescent lighting would be an improvement. People usually overestimate the intensity of indoor lighting, so etiolation in indoor plants is actually rather common (at least in my area).

Not the answer you're looking for? Browse other questions tagged trees diagnosis tree-care mulberry or ask your own question.

9
What is 'Etiolation'?
8
Ginger plant too tall for its own good

9
Why won't my mulberry tree set fruit?
4
Baby apple tree under attack by...aphids? What to do?
6
How should I prune my persimmon tree that has a lot of thin branches growing upward?
5
Help needed to repot my 42" avocado tree in my apt please!
3
Is this Mulberry stem still alive
3
Brownish yellow spots on monstera