What does Mesquite Tree sap have that possibly makes it a good fertilizer for dragon fruit?

I have 2 dragon fruit (pitaya) growing under a large 30-year-old mesquite tree. The mesquite tree is dripping sap at the base of one of the dragon fruit plants. This plant is a deep green healthy color. The other plant (which does not have sap dripping at its base) is pale green and does not look as healthy.

Is it possible that the sap from the mesquite tree is providing nutrition to the dragon fruit and if so what is it in the sap that's doing this?

Not sure if this image of the two plants is sufficiently clear to show the distinction. The one on the left has the sap dripping to its base which you might be able to make out in the photo.

More info: They are two different types of Dragon Fruit. One is white and the other red although neither have produced fruit to date. I also don't know which one is which. 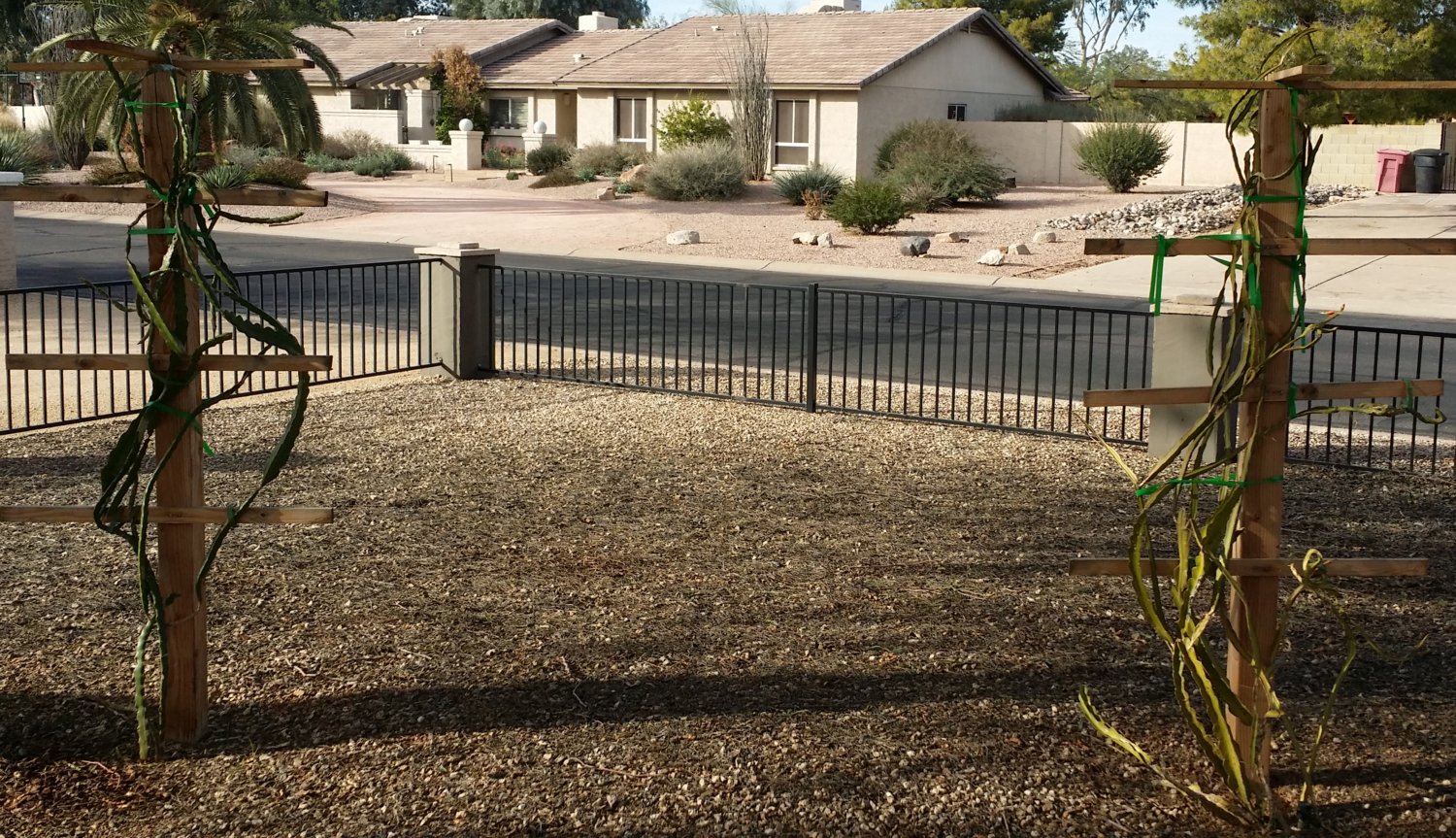 ...maybe, it is possible that the sap is feeding mycorrhizal fungi, that are making more nutrients available, or there is some nutrient freely available in the sap, or maybe it is just shade... but most likely is that it is just a coincidence, and the other one is under some sort of stress, from heat, or dehydration, or disease, or injury...

if you think it is providing something, you could try a micronutrient fertilizer for the other one.

I would agree with @Grady, but also add that mesquites are legumes.

My understanding is that fixed nitrogen in the root nodules will remain there until the tree dies, so it is unlikely to be that. But how much is transferred in the sap? Legume beans have high levels of nitrogen (in the protein), so some of it must be transferred in the sap. But is it enough to make a difference?

Your mesquite tree shouldn't really be constantly dripping sap - if the sap it is producing turns black or becomes smelly, it would indicate slime flux, a bacterial infection which sets in where sap is constantly running. These trees do bleed and produce sap when damage has taken place, or it has been pruned, particularly larger limbs, so it might be worth inspecting the tree to see if there is anything causing damage.

As for the nutrient value of the sap, mesquite contains calcium, magnesium, potassium, iron and zinc, probably with some fructose as well. The rich green might be to do with the iron content rather than anything else, since dragon fruit likes neutral to mildly acidic soil conditions. Or, in connection with your other question re dragon fruit, the pale one is actually sick, whereas the darker one isn't.

UPDATE: You've confirmed the pale one is the infected plant, so the colour difference might very much be to do with one plant being sick and the other not. Question is, why is the dark green one healthy - calcium from the sap, possibly? No way of proving it though, just a theory.

Not the answer you're looking for? Browse other questions tagged fertilizer sap or ask your own question.

4
What fruit/nut/berry grows in mottled sunlight on a climbing structure?

8
What's in eggshells that makes a good fertilizer?
2
What is the best frequency to fertilize fruit trees?
9
Output of Septic tank as fertiliser
4
Why are my morning glories stunted/deformed?
6
Fertilizing Over Mulch (Specifically Apple Trees)
7
Junipers and Fertilizer times and Nitrogen