What does 'standard' mean when referring to shrubs and vines?

I often see shrubs and vines for sale labeled as 'standards'. What does that mean?

Standard, in this context, means trained into tree form. Usually standard shrubs and vines are trained from a young age, allowing only one stem to grow from the ground, forming the trunk. This must be kept free of sideshoots and laterals up to a certain point, which makes up the head of the standard. A good head will look bushy and balanced, and fit with the length of trunk.

In other cases, The trunk is grown first, either from seed, or as a cutting, and the head is grafted on as one or (usually) more scions. This is grown on and trimmed regularly until it is ready for show, at which time it is planted out or sold. This is almost always the method used or weeping plants, or to get multiple bloom colors in one head. It creates a more formal, globe shaped head in non-weeping specimens.

These plants must be carefully tended, to keep them from reverting back to their natural form. This means removing all shoots from the head down, and careful heading back, pinching, and thinning out of the head as it grows over time. Eventually, you will want to replace the entire plant, as they can get ragged and lose vigor with age. However, with informal standards, like the wisteria standard pictured below, age enhances the plant, and the best ones are the ones that have been around the longest.

Usually, the standard needs support, which is usually provided as a system of stakes and ties. This is especially true of vine standards, which cannot support themselves well even when mature. 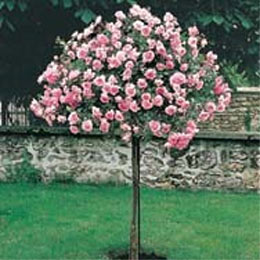 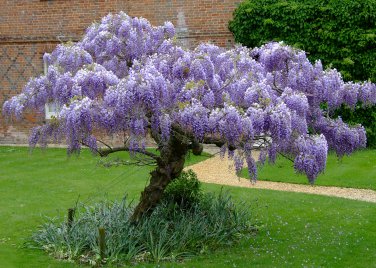 Not the answer you're looking for? Browse other questions tagged trees shrubs vines terminology or ask your own question.

16
Should trees be staked when they are planted?

9
What does PVP mean?
5
How can I permanently get rid of honeysuckle vines?
4
What kind of ivy plants are these?
6
Help identifying this vine with green and white heart shaped leaves?
2
What is a desiccant and is it helpful when saving annual Snapdragon seeds for the winter?
4
Encouraging wisteria to grow quickly
6
What grows/flowers like trumpet vine, but isn't?
1
Do I need more vertical support for climbing roses?