Tomato plant discolored and dried out

I have a home garden with tomatoes and peppers. The peppers grow great every year, but often the tomatoes end up discolored with dried out leaves.

I recently did a Manutec pH test on the soil and it came up as 8, so I added some sulfur to the soil around the tomatoes. If this is the issue, how long would it take the sulfur to take effect? Does anyone have other ideas about what the problem could be?

I am in Australia (Southern hemisphere), so it is the middle of summer and the tomatoes should be ready for picking in February. 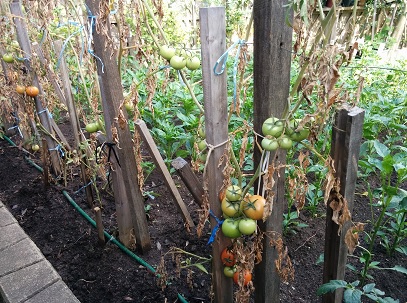 One of the most common reasons of tomato plants shriveling up are fungal diseases.

The spores live in the topsoil and can get on & infect the leaves by falling raindrops. (Sounds complicated, but actually the "splashing" rain drops just propel the spores upwards.) Some kinds can even survive on porous substances like wooden stakes and re-infect new crops.

Not the answer you're looking for? Browse other questions tagged soil tomatoes ph or ask your own question.

3
What is wrong with this tomato plant with yellow and black spotted leaves? [picture]