What are these brown, cap-shaped mushrooms on my birch tree?

I live in Massachusetts and have several birch trees in my yard. One of them has brown, cap-shaped mushrooms growing in groups up and down the trunk. As you can see, the tree has a big crack in the bark. What are these mushrooms, and are they killing my tree? 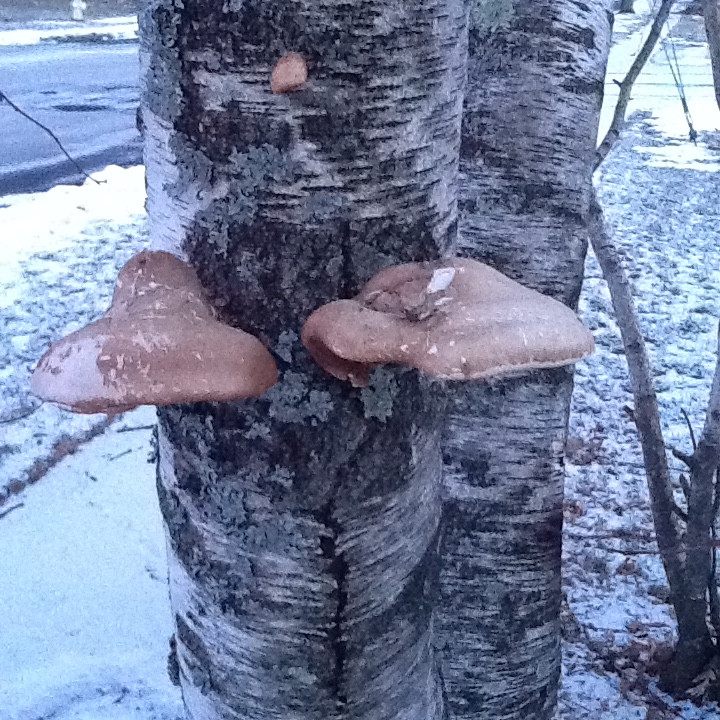 Those look like Birch Polypore, scientific name Piptoporus betulinus. This mushroom is global but found almost exclusively on birch trees. The polypore is called "saprobic," which means it feeds on parts of the tree which are already dead or decaying, so most likely that crack was there first. Now that the tree is infested, though, unfortunately it's likely to die. This article from Northern Woodlands describes the process:

Perhaps a birch polypore gets its start many years before we see it, when a spore lands in a wound or a broken branch of a healthy host. Before the infection has a chance to spread, it is stopped in its tracks by the tree’s defense mechanisms and compartmentalized, to lie dormant for years until age or a downturn in fortune weakens the tree. At this point the ailing birch can no longer afford to maintain its defensive arsenal and the fungus revives and spreads.

The mushrooms appears in the spring, and by the time that happens,

decay is extensive. This fungus can reduce wood density by 30 to 70 percent in just four months. After a few more months, the wood is very light in weight and can be crumbled to a powder in your hand.

The Hiker's Notebook gives a comprehensive description of Birch Polypore, including scientific information as well as some interesting facts about how it was originally used in practical applications:

Its hard, leathery surface can be peeled off in strips and was used in this form as a strop for sharpening razors. It was also used as a means to maintain and transport embers from one campsite to another in order to obviate the need to repeat the sometimes difficult fire initiation process.

Both sources say one way to tell the level of decay is to smell your tree, as the rotted wood smells like green apples!

Not the answer you're looking for? Browse other questions tagged trees diseases fungus mushrooms or ask your own question.

6
Can I allow a pine tree to share root space with a group of birch trees? If not, which should I cut down?
5
Should I remove brown, cap-shaped Birch Polypore mushrooms from my tree?

5
What are these mushrooms?
5
Should I remove brown, cap-shaped Birch Polypore mushrooms from my tree?
6
Can I allow a pine tree to share root space with a group of birch trees? If not, which should I cut down?
9
Can Oyster mushrooms grow on a Yucca tree?
5
Why are large sections of bark peeling off these birch trees? Is it contagious?
7
What is this tree with bark that has diamond-shaped ridges?
3
What has damaged this tree?
0
Growing oyster mushrooms: Mycelium turning reddish brown? Help!
1
What kind of mushrooms are these growing in the sun in Houston
2
What are these mushrooms growing in my AZ lawn?