Does it matter if my cabbage forms its heart some way off the ground?

My cabbages have been growing strongly, but until recently mostly big loose leaves, not hearts.

Now they're beginning to heart up, but some way up the stalk and off the ground (about 12-15cm up the stalk, possibly more [photo probably shows the most extreme example]). 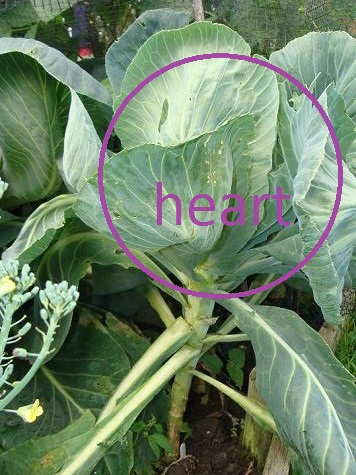 But is this a problem? In a lettuce (which I am more used to growing) this would look like a plant that had started to bolt. And also, archetypal illustrations of healthy cabbages always show tight balls close to the ground.

Edit:
Further thought: Could it be connected to overcrowding and/or being shaded by nearby beans and broccoli? Are these guys reaching up for more light?

My cabbages, for whatever reason, seem to all do what you're describing. (A picture of yours would confirm if they're the same as what I have.) They end up with a stem a few inches long (10-15cm) and then a good head (heart). Nothing to worry about.

First, I've never seen or heard of such a thing happen to cabbages before.

A photo or two on the cabbages would be helpful (IMHO), so we can see exactly what you are talking about.

Also, I've just returned home from my local feed mill, while there I asked them about your particular situation, below is a summary of what they had to say:

Below is what a few gardening "experts" on twitter have had to say, after asking them to take a look at the question:

@simiansuter - I've found what's described can happen where conditions are not "A1":

@Rhizowen - If they were transplanted before getting into head mode, this could have put them into shock, the result being the "mutation".

@MarkDoc - Mutant veg should be encouraged! If it tastes great, who cares.

@timandjoe - No we've not seen anything like that, but it makes harvesting them a whole lot easier :)

Not the answer you're looking for? Browse other questions tagged vegetables harvesting brassicas cabbage or ask your own question.

4
Can I train a Ground Cherry to climb a trellis or something else to get it off the ground?
4
Why does the size of the pot matter when fertilizing?