What exactly is an outdoor bonsai?

I recently got a Brussels Boxwood Bonsai, 3 years old. And I have it placed indoors near an optimally sunlit area and apartment temperature is around 70 F.There seems to be a little bit of wilting/decay on the top canopy.

Boxwood is supposed to be an outdoor bonsai.
What exactly does the term outdoor mean?

Should I just the place the bowl outside or have it replanted on ground outside? If it must be outside anyhow, is that absolutely mandatory? Are there no alternatives to placing it outside?

To me if you were told that it should be an outside bonsai then I would try it outside. If you plant this in the ground it will no longer be a bonsai in the classical interpretation. A boxwood is an outside plant. You could keep it outside during the day or when you are not at home. Bring it inside when you are home so you can enjoy it. If there is a spot in the house that is most like outside then try it there. This could be a porch or a very sunny spot in the house.

Anything that a bonsai expert would work on is an outdoor bonsai. Some people train succulents to be bonsai like, but these just don't cut it in terms of style and quality. If you had an indoor succulent type bonsai and referred to it as such to a Japanese or Chinese person they would likely suggest you are using the wrong word to describe your plant.

Many nursery retailers keep succulents and other such things close to their bonsai displays, that they grow in a similar fashion to bonsai and because most succulents will thrive in a tiny pot if given the occasional watering, they are damn hardy and nurseries want to keep their customers happy, so they sell these plants as bonsai (e.g. jade tree in tiny pot). It has the added benefit of being cheap to cultivate and unlike proper bonsai, they don't die after a week because the buyer doesn't have the experience to care for a real bonsai.

For anything that is a real bonsai, which is a real tree which is growing in a place where its roots are restricted, it has to be treated just like a real tree. It needs optimal water (not too much or too little), it needs enough sunlight and it needs fresh air, it also needs enough nutrients in the soil. If any of the above are lacking it will shed its leaves and then die.

The bottom line, you can't keep a bonsai inside your house for more than 2 days a week if you want to keep it growing healthy. I usually only bring one or two selected plants into the house when visitors are coming.

You do not need to plant it into the ground, just have it somewhere were it will catch the breeze and can get some sunlight (without drying out).

Bonsai is a miniature living tree so you should provide an environment which is suitable for your boxwood. As fas as I know this tree prefers USDA hardiness zone 6-9. If you live somewhere where the outside temperature is adequate than I suggest outdoor cultivation.

Just place the bowl (and the plant) outside. Usually outdoor bonsais are not directly planted in the ground. For a beginner (like myself) it's much easier to use a bowl. If you plant it outside and stop pruning the branches and the roots it will grow like any boxwood, and it won't be a bonsai anymore.

Because of the small size, your bonsai boxwood will be more sensitive than a "normal" boxwood at the same area. You should take care of the watering, and during winter you have to avoid freezing of the roots.

If the outdoor temperature is too low, or you have no garden, you may try to grow it indoor. Several successful attempts show that it's possible. Usually it's not too difficult during summer, but you need to find a cooler windowsill before winter.

According to my Bonsai books (specifically Practical Bonsai), an outdoor bonsai is just that - it's a plant that would normally grow outside where you are, and it needs to be kept outside, and not in full sun. If you live somewhere that gets very cold in winter, the plant will need to be moved under shelter during the worst temperatures, but really should not be kept indoors for longer than 4 weeks, and preferably only 2 or 3 days. An example of an indoor bonsai in the UK would be Aralia elegantissima, most Ficus varieties, or Crassula arborescens; Pinus parviflora (japanese white pine), Acer varieties, Boxwood are examples of outdoor bonsai.

An outdoor bonsai is a bonsai of a species that can naturally grow in the climate you live in. This does of course not necessarily mean the region you live in: 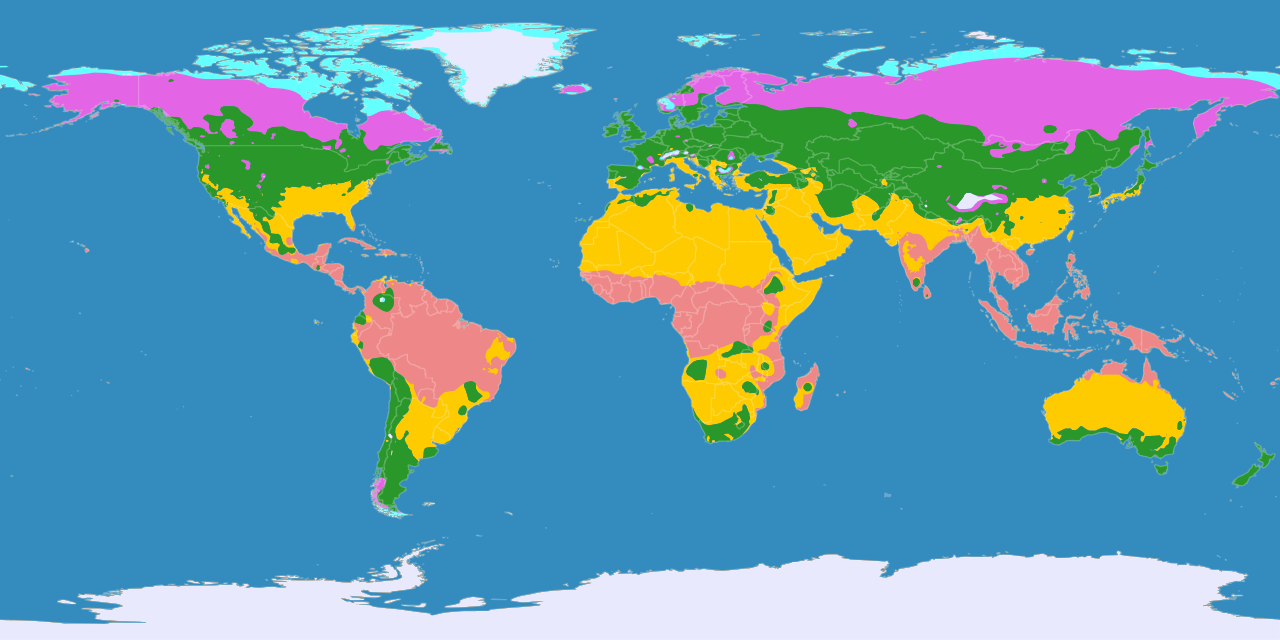 For a species that can not survive in the climate you live in, you need to create an artificial climate which means taking it indoors. Whether this means your window sill or a greenhouse or something else entirely depends on the species and your indoor climate.

Please note that only because a tree is native to a climate does not mean that a miniature tree aka bonsai can be just left outside without special care, especially during winter in regions that experience extended periods of frost.

Not the answer you're looking for? Browse other questions tagged indoors bonsai wilt boxwood or ask your own question.

3
Is a juniper suitable as an indoor bonsai?
3
What gauge wire should I train my bonsai branches with?
6
Bonsai losing leaves
10
Giant Sequoia Bonsai
5
keep bonsai leaves small
6
Growing bonsai using artificial lighting
6
'Dead' Bonsai Help
3
Bonsai Ficus problem
4
What type of bonsai tree do I have
3
Bonsai sprout is loosing all of its leaves, help!