How do I grow rhubarb in hot weather

I live in South Carolina (37 C or 100 F everyday in July), but I love Rhubarb. I planted 4 rhubarb plants in the shade on the north side of my house. 3/4 have died and the last is struggling. They get lots of water. Is there anything else I can do to stimulate growth? Would potting them and bringing them indoors help?

Shortly after asking this question (3 wks ago), I build a Dirt wall around the rhubarb plants (2-3 inches tall, and 14 inches in diameter), which I have filled with around 3-4 gallons per plant everyday. The sandy clay takes some patients to wait for the water to soak in (before adding the rest of the water in small increments) and the soil is still moist the next day. With this extra attention the rhubarb has begun doing noticeably better--one has added 2 new leaves/stalks (it only had 3 before) and the other is still recovering. Thanks Mike Perry for the "ideas link" in your comment.

I grow it very successfully here with summer temperatures to 42 Celsius. We also get sub-zero winters with frosts common. I have mine under bird netting, which believe it or not reduces direct sunlight. I planted mine into a sand mixed with horse manure. I water virtually daily in summer and a lot less in winter.

I cannot stop them raging. I am in Australia in outback desert type country. I have had stalks over one inch in diameter. The white bird netting I am sure, combined with sand and horse manure mix is the secret. 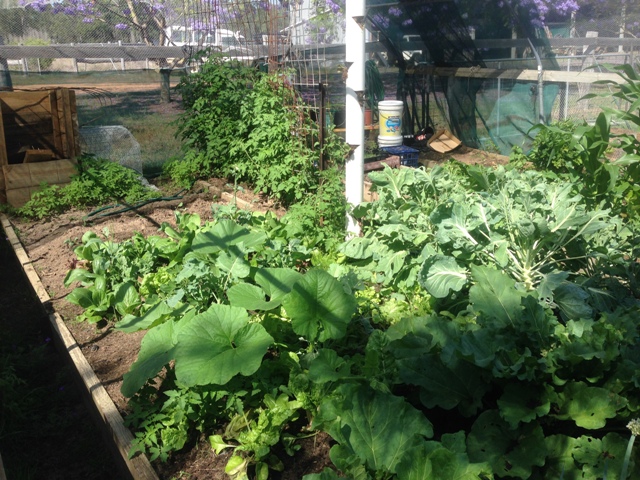 For North Texas (similarly hot, but less humid) it is recommended that rhubarb is grown as an annual.

I tried it once but it was a dismal failure - one (of two roots) sprouted but didn't get past about 6in. I chose a shady spot, but the root stock (from a big box garden place) was probably poor quality. I think there's a good reason much of the local population don't know what it is (I've had check-out people at the grocers not know what it is) - and that is, it doesn't grow well at all in the hotter climates.

I grow it in the UK where it thrives. I'd suggest putting it in a shady area under some trees or shrubs. Maybe you could grow it in late winter / spring and autumn as an annual? It needs cold dormancy (induce in late summer by putting the root in a bag and in a freezer). Then in late summer when it is cooling down - plant it and harvest in late autumn / early winter and maybe through till spring. When it starts getting hot again, cut it back, dig it up and store it in a fridge until late summer when it should go in the freezer for a week or two. I'm not sure if this will work, but Rhubarb is very cold hardy and could be forced to grow in a cooler part of thr year IMO. It won't thrive in heat though, so don't have it un the ground during the middle of summer. I'm not sure if it'll work, but it's worth a try. Rhubarb roots are dirt cheap and can be divided every few years.

Your problem is growing rhubarb in a warm climate, mine is growing grapes in a cool climate. Rhubarb is easy to grow here - put it in the ground and forget about it.

When I grew rhubarb in England, it thrived without any help. Of course, the climate in England is temperate.

It doesn't grow very well at all in climates approaching sub-tropical and warmer. Even if there is a noticeable cold season, rhubarb will find it difficult to thrive when summers are hot. The humidity level might be important too.

I've attempted to grow rhubarb in two different parts of Tennessee. In the mountains of Northeast TN, at about 2000 feet elevation, I found that rhubarb planted in the spring seemed to thrive for a while, but by August it had all but melted into the ground. I would think that the NW corner of South Carolina might experience something similar, the rest of the state being worse for rhubarb.

In West TN, a few miles from the Mississippi at about 300ft elevation, where winters are less cold and summers tropically hot and humid, it gave up the ghost much more rapidly.

Growing it as an annual might be possible, but an important point about rhubarb (to me) is that it's around for many years. I've given up growing it, with despair.

I suspect that the climate of the area around San Francisco, California, would be good for rhubarb.... also Maine, Michigan, northern Illinois...

I'm recently retired here in southern Brasil from Manitoba, Canada. I too miss rhubarb crumble, and of course nobody ever has heard of rhubarb here. I brought some seeds from Canada, and started the plants outside in a planter in mid winter (July here). They grew amazingly well! I even managed to savour a rhubarb crumble, then the weather got really hot, and they fizzled out and disappeared. I don't think the plant likes warm soil. I'm going to try again and this time watering only with cold water, maybe that might help. I have pictures of the plants; they were awesome!

The state of North Carolina says you can't grow rhubarb anywhere in the state except in mountainous areas. That said, my wife and I have been developing a method for over 18 years and got to the point last year that we grew about 300 pounds of rhubarb in eastern North Carolina about an hour east of Raleigh. It can be done, but you have to totally rethink rhubarb. We grow it as an annual from seed, but it is tricky so we had to develop our own tricks. In the end it has been very rewarding, fun, and profitable. I just want to encourage that it can be done in hot weather areas.

I am on the second summer with my Victoria rhubarb plant from seed. My plant is in a large 18 inch diameter pot. It gets barely any sun, 6 hrs maybe but by 2pm it is in full shade. It is in a mostly peat mix, well fed with organic fertilizer, and heavily mulched with pine straw. I have yet to harvest because I want the plant to be strong. I want it to climatize and be perennial. If it lasts the summer and comes back I'll know I figured it out. Morning sun and full shade early afternoon might be key,

I've grown rhubarb for many years here in western Oregon. Summers are warm and semi arid. Winter can be cold and very wet. I have my grandmothers rhubarb(50+ year old plants)which I've moved several times. Today I moved another into a large pot. Mid June. A few things I can tell you about rhubarb. First, they love soil that is rich in compost. Anything you can use to loosen up the soil will reward you with vibrant plants. Second, rhubarb plants are heavy feeders in the spring. I like to dump a bag of steer manure around each plant in the spring. They'll go insane. And third, when the weather starts to warm give them lots of water. I also like to use bacterial soil amendments. When I use this I will get stalks as big as my wrist and extremely dense. Makes my mouth water just thinking about it. I had good success with container gardening rhubarb also. BIG pots are the key here. I like to use Miracle Grow potting soil. It absorbs and holds water really well. I hope this helps you. Enjoy!

I grew up in Fontana California and we have about 12 inches of rain a year but we had wild rhubarb that grew in the lot across from my house. Zone 9. Which is very hot and has no frost! The lot was full sun but was not weeded which may have provided some sun protection. We did nothing, but cut and make pies and apple rhubarb sauce. No fertilizer, no water, no amendments. The plants were small but tasty. The key was we were in an alluvial fan and the soil was sandy with some silt, but drained extremely well. I have no idea what variety it was but the stalks were dark pink and the leaves dark green and the plants were only 18 inches high.

Not the answer you're looking for? Browse other questions tagged vegetables optimal-conditions rhubarb hot-weather or ask your own question.

11
How do I treat rhubarb rust?

31
What's the most effective way to harvest rhubarb?
11
Forcing rhubarb - alternatives to fancy forcing jars?
19
What happens if you plant lettuce in hot weather?
7
How can I grow cold weather crops in a hot climate?
8
Is there a correct moment to start forcing rhubarb?
5
How should I grow a Bower Vine, especially in a climate that gets hot in the summer?
1
What is best rhubarb to grow in hot weather