What happened? - Chilli plants are developing spots on leaves and the edges are curling

I found some questions about other chilli plants, but I don't think the leaves look quite the same as mine, though it may be the same as the 2nd question posted.

Light brown spots have been developing on some leaves, and some have dry, curled up edges. I have been adding a general fertilizer once a week. I have also been using pyrethrum spary perhaps every 1 and a half weeks. They also have some slow release fertilizer under that mulch.

Every 3 to 4 days, depending on weather. If it's a hot day I may have to top it up a bit, or they start to wilt.

I haven't used the slow release fertiliser since I posted this question.

On my largest chilli plant, it looks like some of the leaves have been eaten by some bug. But I have checked for pests and can't find any.

I don't use this very much since I posted my initial question. I was experimenting with it as a way to control fungus gnats. Pretty sure it does nothing.

Update 2 So I picked Enigma's answers since at the time of acceptting answers it had other information in it.

But yes, everyone appears to be right. I stopped the fertilizer and now, the damaged leaves are still damaged, but new leaves are fine and and the problem has not continued. I will also try getting new fertilizer sometime. 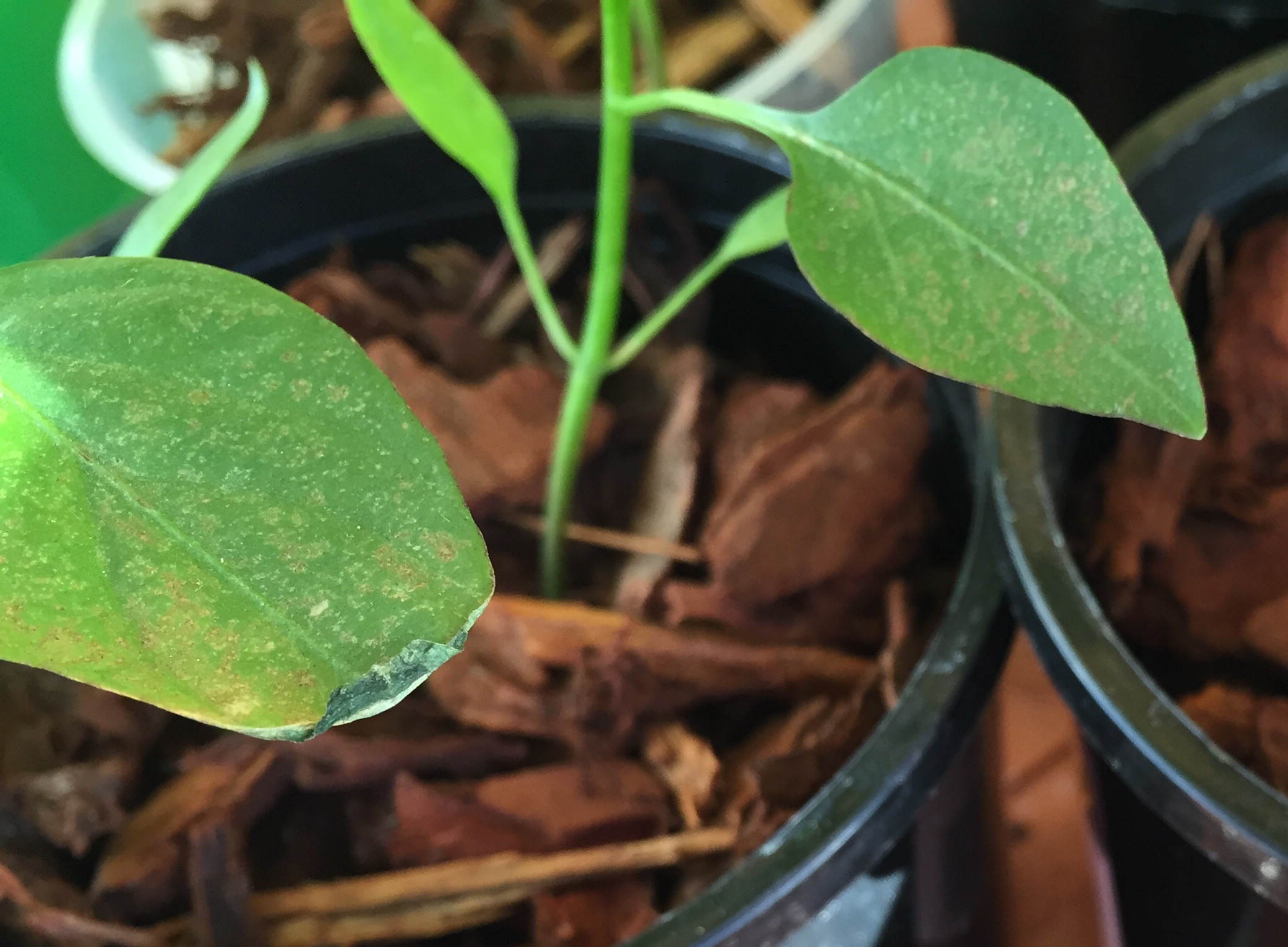 Excessive fertilization almost definitely. You shouldn't need to fertilize a plant for a while. Doing so will destabilize the soil conditions. Once a week is too often. Start with once a month but not until needed. Then as it gets larger, move to every 2 weeks but still only as needed which means it may vary (see bottom of post).

Also, as noted by Shule in the comments, the NPK ratio ought to be more balanced or in favor of slightly higher potassium. Potassium typically correlates to food for the fruits ie peppers in this case. I would recommend a light 1-1-1 fertilizer to start and again, not until necessary.

I'd recommend doing a water flush of about 2-3 times what you would normally do, stop all fertilization and wait a week. Depending on how much water the plant needs based on sun/heat, provide enough to keep it satisfied after flushing but not too much.

Do you need to be using Pyrethrum Spray? Reduce the amount/frequency by 50% if the pests are a problem, bump it up to 75% (of what your currently doing).

These things grow out in the wild in all sorts of varying conditions and they do just fine. The less you do and the less you deviate from nature, the better.

Container gardening can be tricky because roots cant extend as far as they normally would and are instead subjected to pretty much the same conditions uniformly. Typically you'll have a much easier time if you use a larger container with more soil. Larger = less susceptible to destabilization.

Other than that, more details as Apoc says would go a long way.

Also see: How often should I fertilize vegetables?

The above link also eludes to the importance of soil PH. This is easy to test by gathering some run off from the initial flush.

In addition to testing the PH, you can and should also test the ppm which will tell you how many particulates are dissolved in the water. I would get a ppm reading on a fresh pot of the soil your using and consider that to be a good default.

In my experience (eight years of growing peppers) there could be are a variety of things that could be wrong with the plants in question. 1. Excessive watering 2. Burned roots from excessive fertilization 3. Lack of essential minerals or nutrients (This doesn't seem likely in this case) 4. Aphids or other infestations

If you could give some information on your watering schedule, what the NPK of the general fertilizer and slow release fertilizer is and do a thorough inspection for aphids or other insects around the stems, under the leaves and around the base of the plants. This information would give us a clue as to where the symptoms are coming from.

You stated that you were using the following fertilizers:

Assuming your soil nutrients were balanced to begin with, the problem appears to be that you are using a very high-nitrogen fertilizer on peppers. Peppers, tomatoes and many other things prefer much less nitrogen than that. Most sources seem to agree that they prefer somewhat less nitrogen than phosphorus and potassium. I would probably recommend equal amounts of phosphorus and potassium, but I'm not an expert there, yet.

When nitrogen is proportionately much higher than potassium, it will inhibit the effect of potassium. Therefore, plants may get burned (like the tips of your leaves), and they may be more susceptible to disease and insects. They may also have reduced fruit size and be weaker. Nitrogen is supposed to encourage growth considerably, but in my experience with plants in the nightshade family, too much just makes the plants dwindle or have issues. However, some people report lots of green growth and little or no fruit when there is too much nitrogen (I'm guessing those people have more than window light or aren't growing indoors like I am). Plenty of sunlight really changes the way plants respond to what, and it seems to increase salt tolerance. If you could increase your sunlight, it would probably help a great deal. Grow lights may help, too.

Anyway, I hope you didn't use too much of that fertilizer.

To remedy the problem, you could add a fertilizer with no nitrogen in it (but plenty of phosphorus and potassium), such as 0-10-10 or 0-18-16, and after the imbalance is corrected, when fertilizer is needed again, use something like 10-12-12 or 18-18-21 fertilizer instead of your old fertilizer; occasionally 7-7-7 fertilizer should be good, too (especially if you need extra nitrogen). However, as I understand it, you shouldn't need to fertilize peppers a terrible lot. Some say you only need to do it twice outdoors (once when you transplant them and once right after the fruit starts forming or so), but when indoors they may do well with more frequent fertilization (but probably not that much more frequent). I'm not sure why they would need it more indoors instead of less, however. That's kind of counter-intuitive, unless it drains through the pots more. I'm guessing it depends on how water soluble your fertilizer is, among other things.

Alternatively (instead of the no-nitrogen fertilizer), you could wait until your plant uses a good amount of the fertilizer it has and then just use [10-12-12] fertilizer, or whatever you choose, when it needs fertilizer again.

However, if you really want to know how much of what kind of fertilizer to add, get your soil tested first. It may not have been balanced to begin with.

Too much potassium is possible. I don't know how much is too much, to be honest. But, if your leaves start getting yellow, you might need more nitrogen and maybe also more phosphorus.

About the insects, you might try dusting your peppers with some food grade diatomaceous earth. It's a natural insecticide. Don't get too much in the soil, though (although some is fine). Peppers don't mind diatomaceous earth in the soil as much as tomatoes do, though. Tomatoes don't really like it much, and they may wilt as a result (but may also recover eventually if it wasn't too much). Also, you might consider neem oil to protect your plants from pests (but if your plants are outdoors, you should know that it may kill bees as well as pests).

Not the answer you're looking for? Browse other questions tagged diseases leaves chili or ask your own question.

18
What is happening to my chilli plant? How can I help it?
4
Dry brown patches on cayenne chilli plant leaves, leaves starting to curl, tiny black spots
3
What are these streaks on my chili fruits?

16
Sudden Outbreak of Yellow Leaves on Tomato (and Other) Plants
3
Chilli Plant Bugs/Brown-Purple Staining
5
Why are the lower leaves of my tropical Guava yellowing and dropping?
4
Dry brown patches on cayenne chilli plant leaves, leaves starting to curl, tiny black spots
5
What is causing white spots and wilting on my Black Naga leaves?
6
What kind of pest is this and how do I deal with it
1
What is this disease with sticky transparent liquid and brown spots on leaves?