What is wrong with my Philodendrons' stems and roots?

The stems of my Philodendron 'Brasil' are getting brown and soft. Is it some kind of disease? I'm growing them hydroponically. 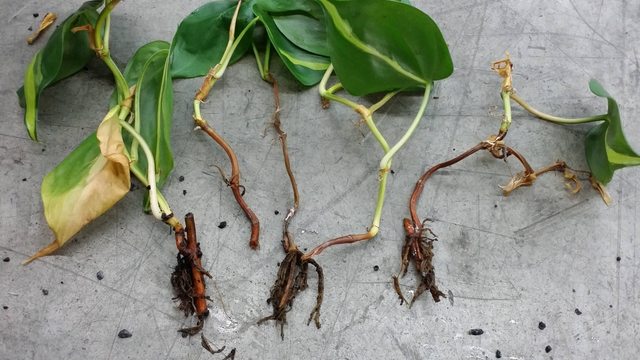 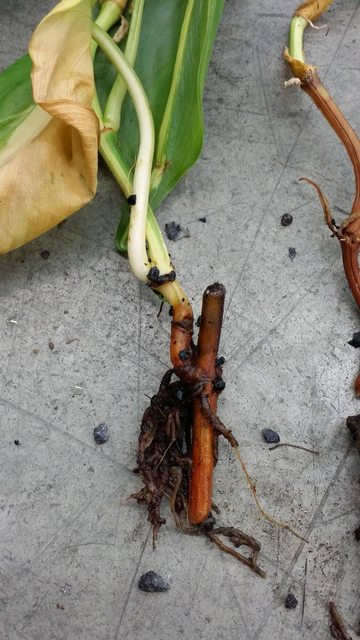 Root rot can occur in hydroponic applications, if the water is not properly aerated. This is usually accomplished by use of an air pump, air stones, air diffusers and by adjustment of the frequency and length of watering cycles where applicable.

That is likely what happened here. Root rot only grows where there is too much moisture, causing anaerobic conditions. Hydrogen peroxide can help oxygenate the water and kill the fungus. From here:

Hydrogen peroxide is an unstable molecule, and when it breaks down, you get one water molecule and one oxygen atom. That's how it helps plant growth, as plant roots require oxygen, and H2O2 provides this, while also killing anaerobic infections such as what causes root rot during overwatering.

While this helps, mechanical aeration of the water in your hydroponic system will help prevent this from happening in the future. Your plants look too far gone to get good success from cuttings, and because that's the only way to salvage the plants, it would be better to start fresh, with new plants.

Not the answer you're looking for? Browse other questions tagged diagnosis diseases hydroponic rot or ask your own question.

9
Are there any methods of fixing transplant shock?