I'm new to gardening as I have just bought my first house. I inherited a very large (about 6m tall) Bay tree that is severely sick. I took a sample to my local garden center and I was told that it is infested with Aphids/Scale (I think they mean Scale as I don't see anything that looks like an aphid) and they are producing honeydew, which has also caused the tree to be covered with a sooty mould. New leaves coming out are fine, but they soon succumb to the sickness. I am carrying out the garden center's recommendations but just wanted to ask here to see if they are in line with what you would do in my situation.

The problem is very severe and is infecting other trees in the neighbourhood, so it is important that I sort it out quickly. I think my Bay is the epicenter as apparently Bay trees are very susceptible to scale.

Do you have any other advice for how to treat a 6m Bay tree for severe scale? Is it OK to aggressively prune it back, as it is far too large? Is there anything else I should know about taking care of my Bay?

If it is important, I live in Cape Town, South Africa. We are in Spring, going in to Summer. The soil is sandy to loamy and we have already had most of our rain - our summers are dry and hot and our winters cold and wet.

EDIT: As requested, here are a few pics of my tree. Hope this is sufficient to identify the species, I'm not sure what to look at. I was told it is a Bay leaf tree (the kind you can use in curries). It is aromatic when you cut it. The tree has a silvery brown bark with some nodules and lots of scarring where the trunks have been damaged and pruned. The fresh leaves are oval-shaped and bright green, older leaves seem to be a dark green but there are no older parts that are not severely infected. At a guess I'd say the tree is between 30 and 100 years old (the houses here are about 100 years old) and the tree is well loved by my neighbours (and me) so I definitely want it to survive. On the advice of the garden center I have got stuck in with a saw but I'm postponing doing any more pruning until I hear more from this forum. 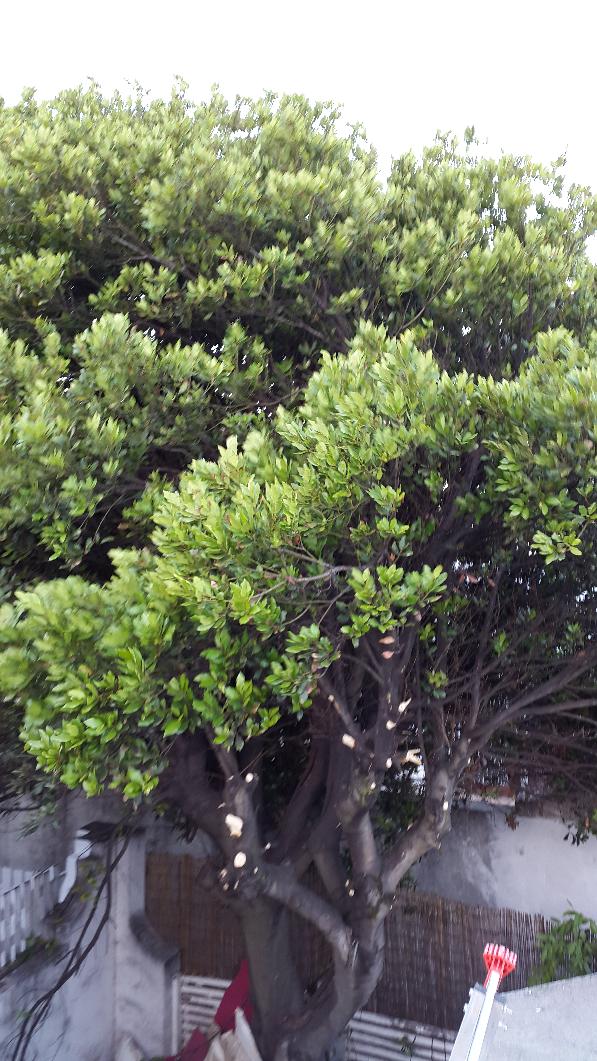 View from my roof (bamboo fence behind is 2m tall) 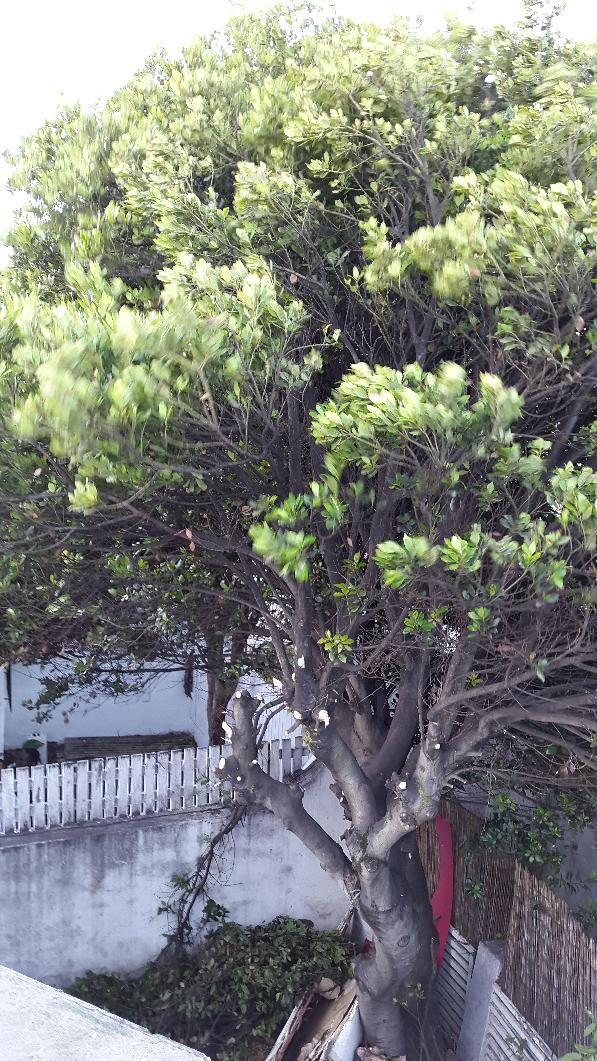 Another angle from roof 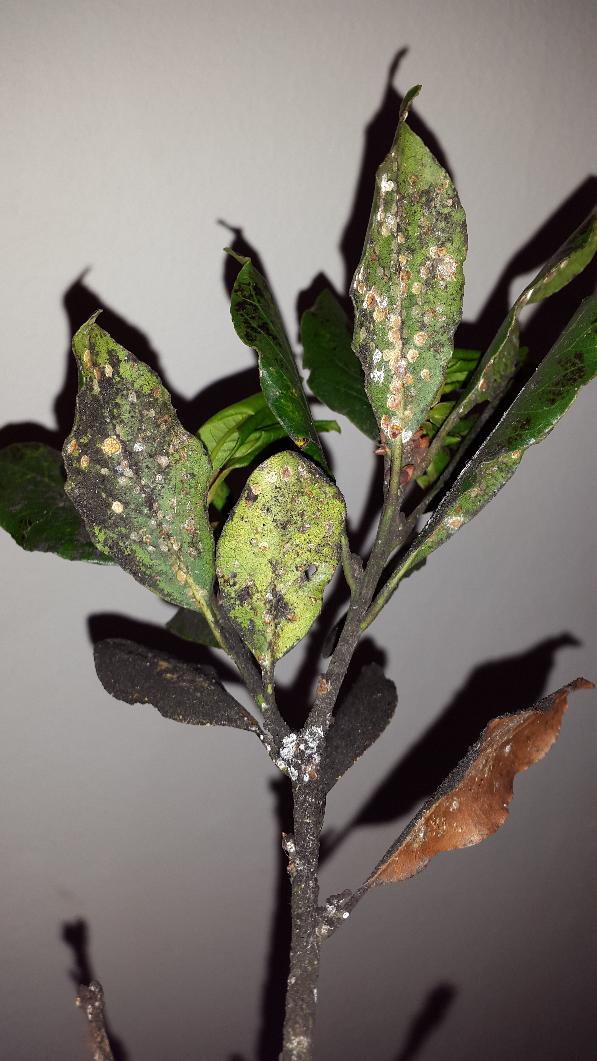 Close up of diseased leaf showing scale and sooty mould 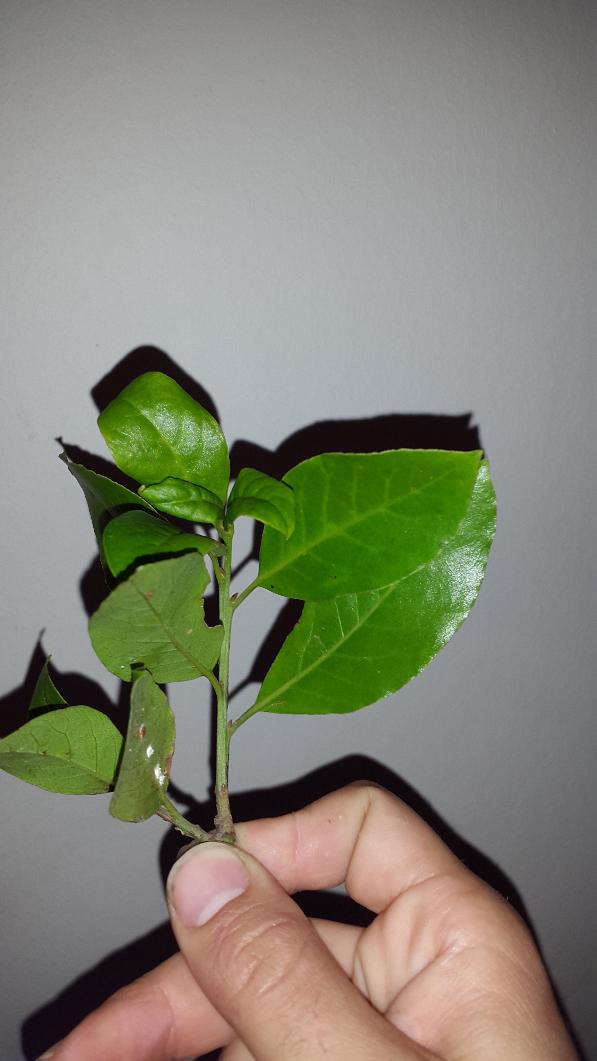 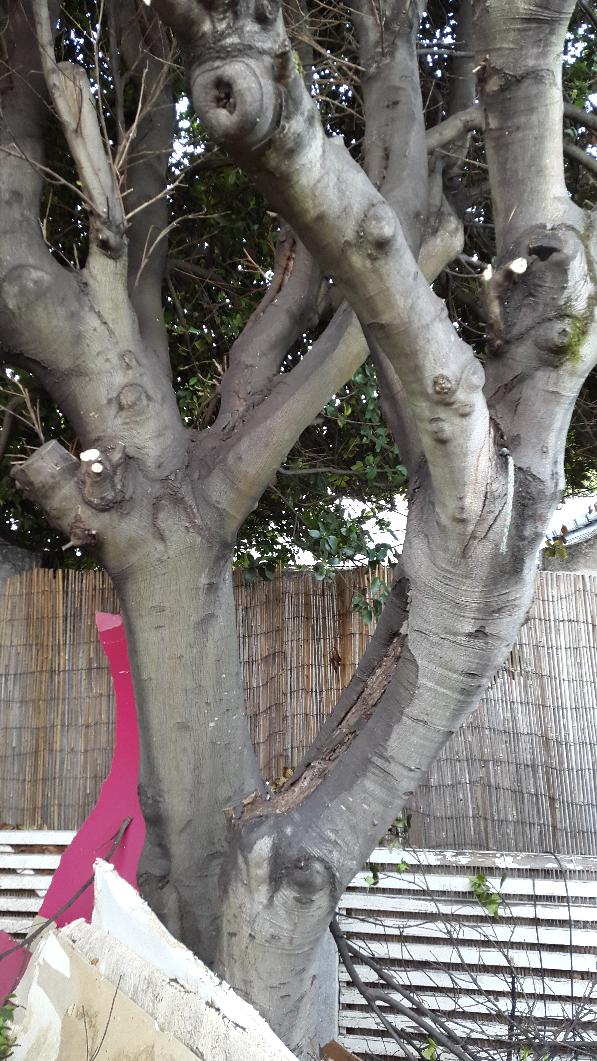 Trunks showing numerous scars from previous pruning and black sooty mould. There is a large wound on the one trunk that almost looks flaky and rotten on the inside.

Thanks for your interest and help!

The problem with a large tree like this is that trying to spray it requires professional equipment. Even with a pressurized sprayer you will get whatever you are spraying drifting onto to neighbors or public property.

In North America you would be opening yourself up for possible legal action by doing this. As you will not get complete coverage and scale that has not hatched yet may not be affected by the spray you will have to spray at least three times at five to seven day intervals.

When to lightly prune Prune in late winter or early spring. ...

How to lightly prune: No routine pruning necessary. Remove diseased, damaged, congested or crossing shoots. Shoots that are growing in unwanted directions can also be pruned out.

After pruning, mulch and feed.

What you want to do is a thinning pruning which is described here.

It took years for the tree to become badly infested with scale and it will take a few years to return it to health.

Edit: Ivan asks about re application of systemic pesticides. There are a number of different chemicals that are used so you are best to go with the recommendations on the label. As a rough rule, no more than once or twice a year. Keep in mind that by using a systemic you cannot use any of the leaves for cooking as they will contain trace quantities of the pesticide.

If you do a drastic pruning on a mature tree and take off sizable limbs you will get a lot of weakly attached sucker growth at the site of the cuts. This growth will be vigorous but after a few years can be so heavy that will break or be ripped off by wind. Not recommended unless you are willing to commit to pollarding

Not the answer you're looking for? Browse other questions tagged trees pest-control pruning tree-care scale or ask your own question.

0
Bay Leaf Tree - Scale
5
Can anyone identify this infection with my Mango Tree?

8
How to care for a large redwood?
3
How to tie tree trunk and branches for support
6
Why would my citrus tree have dying twigs, burrowing insects and black scale?
3
What is afflicting this sick Bay Laurel (Laurus Nobilis) -- and how do I fix it?
3
Fire Damaged Bay Tree (Laurus nobilis) - What to do?
3
Does my bay tree need plant food?