Can I save the berries from a Big Blue Liriope (Liriope muscari) and plant them next spring?

I have a big blue liriope (Liriope muscari) in my yard, and the flowers have changed to berries. I imagine the normal propagation method is to split the adult plant after it grows large enough, but if I don't care about time, could I take the berries and use them in the spring to plant?

Liriope muscari is rather challenging to grow from seed. For one thing, the pulp contains phenolic compounds which inhibit germination, so the seeds must be cleaned well before use. Seeds also have a morphological dormancy because the embryo is not fully developed when the fruit ripens, so a period of warm stratification is required to complete maturation. The seeds do not store well. Plant them in the fall, after the stratification period is over, in a flat of coarse, sterile seed-starting mix. Push the seeds into the mix surface, and cover in 1/4" of fine grit. Keep the mix damp, and place over a bottom heat of about 75-80°F.. The seeds should germinate in 25-40 days, at a rate of at least 75%.

The seeds are polyembryonic, so many of the seeds will put up multiple initial leaves, and should be separated carefully when 2-3" tall, and grown on in individual cells until the frost is out in spring, at which time they can be moved outdoors, either into the ground, or into larger cells for plug planting later. Begin fertilizing with a weak, balanced fertilizer at separation, and don't start full-strength fertilization until they are moved outdoors.

Even though the germination rate is very low, the polyembryonic feature often provides over twice the number of seedlings than the number of seeds initially sown. Expect differing growth rates from the seedlings, as they will differ genetically from the parent, to a degree. For a uniform crop, cull for:

Also note: If you cull for small size over several generations, especially if you specially breed them for this purpose, you will have a drastically smaller plant than you started out with, and so on.

I have had very high germination rates by collecting big blue seed in fall, soaking overnight, then completely removing the berry (Wear gloves). Then they soak in a 1/10 ratio bleach water solution for 10 minutes to remove germination inhibitors. Rinse with a mild soapy solution to remove bleach residue. Then I lay them on the surface of damp seed starting mix in a covered tray, and refrigerate for another couple of weeks. Then remove from refrigeration and wait, light is not necessary at this stage, but watch for emergence. Once the very wiry roots, and leaves begin to emerge, I move each bare seedling into a 72 cell tray to grow until its warm enough outside to plant in individual pots for growing to a larger size. I have started several hundred seedlings this way. As for the seedlings being identical, its too early to say at this point, but very possible that there may be differences later. 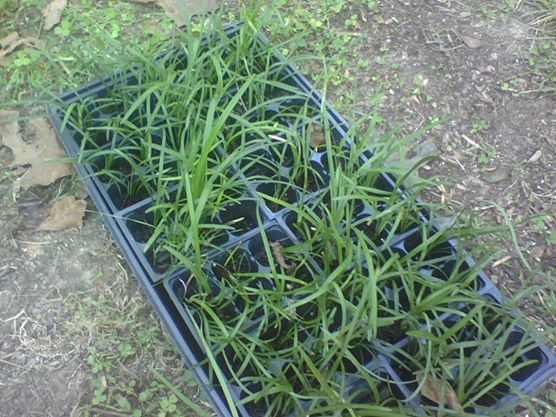 Not the answer you're looking for? Browse other questions tagged flowers propagation seed-saving ground-cover perennials or ask your own question.

8
Will sunflower seeds that have been left out all winter germinate?
1
Is the end of June too late to harvest and plant seeds from a Hellebore in zone 6a?
5
What is this small annual with narrow gray/green leaves and rust colored daisy-type flowers?
4
What do globe amaranth seeds look like, and can I harvest them from dried flowers?
7
Hearty Flowering Perennial for curbside appeal
4
Why do my calla lilies not develop full color?
8
What is this tiny blue/purple flower with thin, vinelike stems, in Charles City, Virginia?
6
What kind of plant is this
1
Plants for under blue spruce tree