How Should I Take Care of These Two Phalaenopsis Orchids with Different Behaviors?

I bought a pot of Phalaenopsis Orchid while its flower was almost dead a few months ago. Several weeks later I bought another pot with no flowers on it. I've been keeping both pots in the sitting room at a North-facing window with not a lot of sun, and appropriate humidity. The manual says to water once a week, I followed it when I first bought it, assing the orchid food drops into water, but as I live in a very humid area, I increased watering intervals to twice a month or so.

The first pot's only flower fell off a couple of weeks ago, and afterwards started blooming/blossoming. It looks very fresh and happy and the flowers are coming, and there's a new step growing as well. 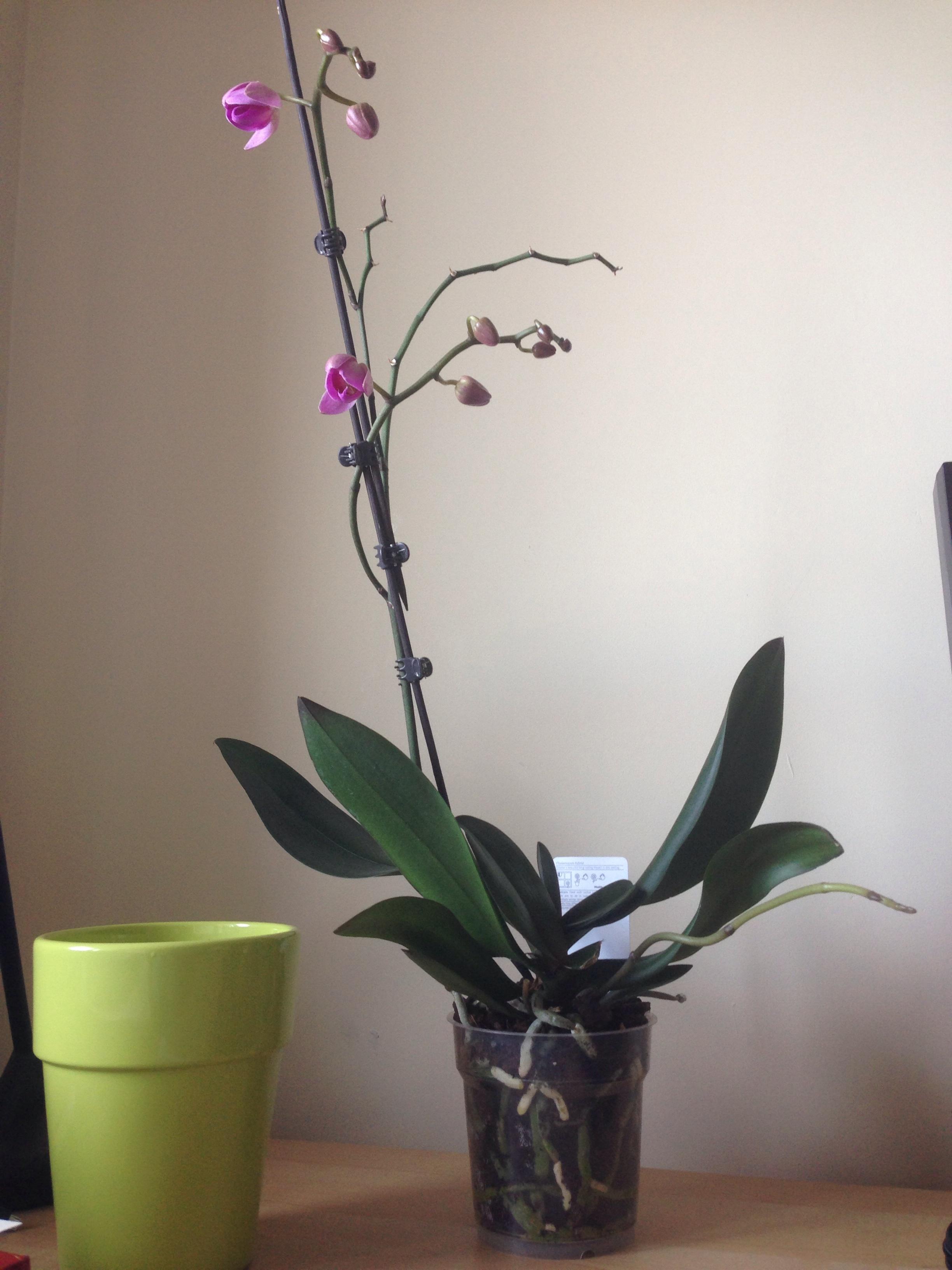 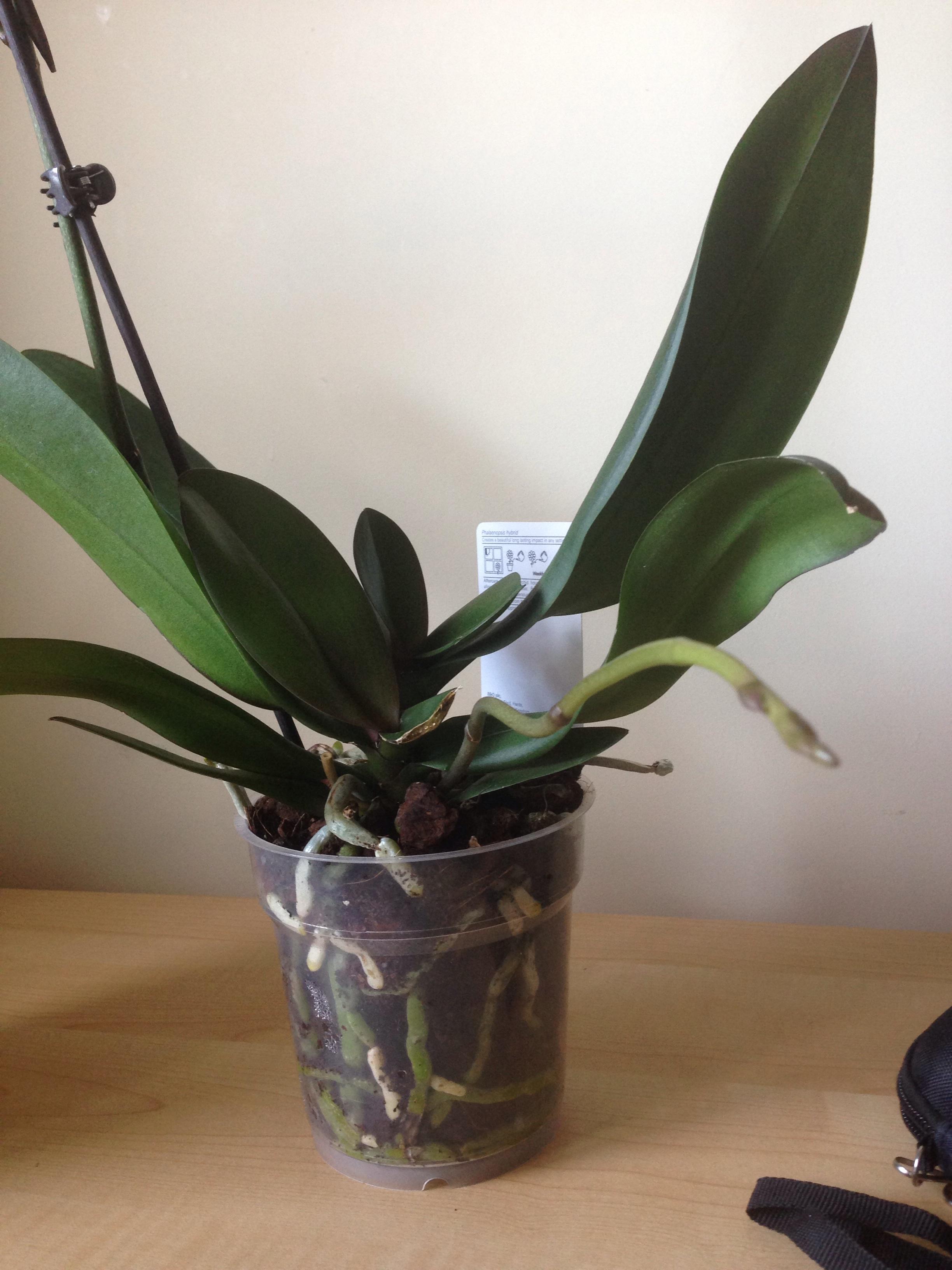 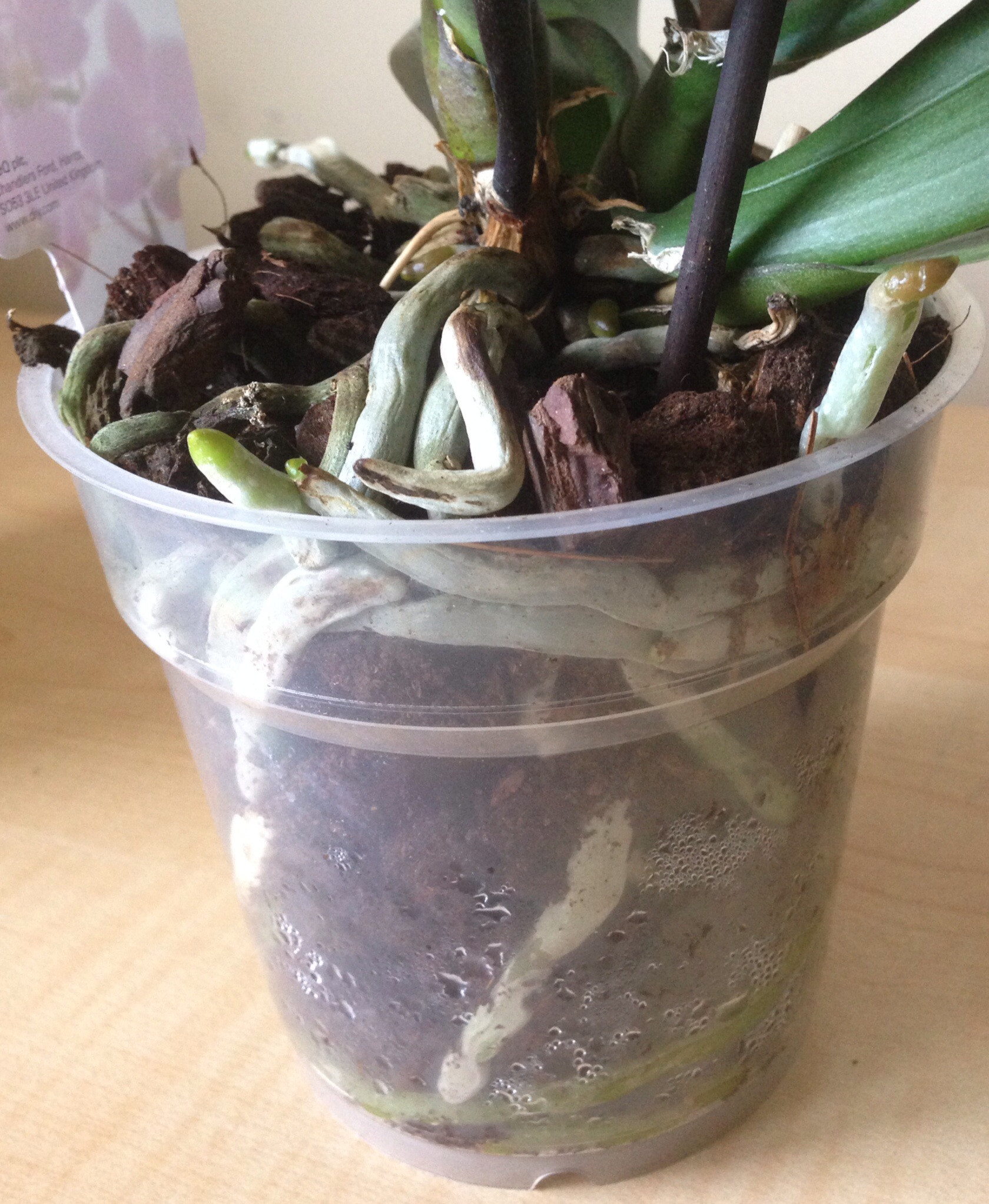 The leaves of the second pot are getting more and more withered and one of them is turning yellow. The roots don't seem to be in a good condition, either. and the whole plant can come off easily from the pot, as if it's not well settled in it.

I searched before posting, and I read the answer to this question: My orchid has one yellowing leaf. What's gone wrong? but I think mine is slightly different, as I have one other pot at the same condition doing pretty well. 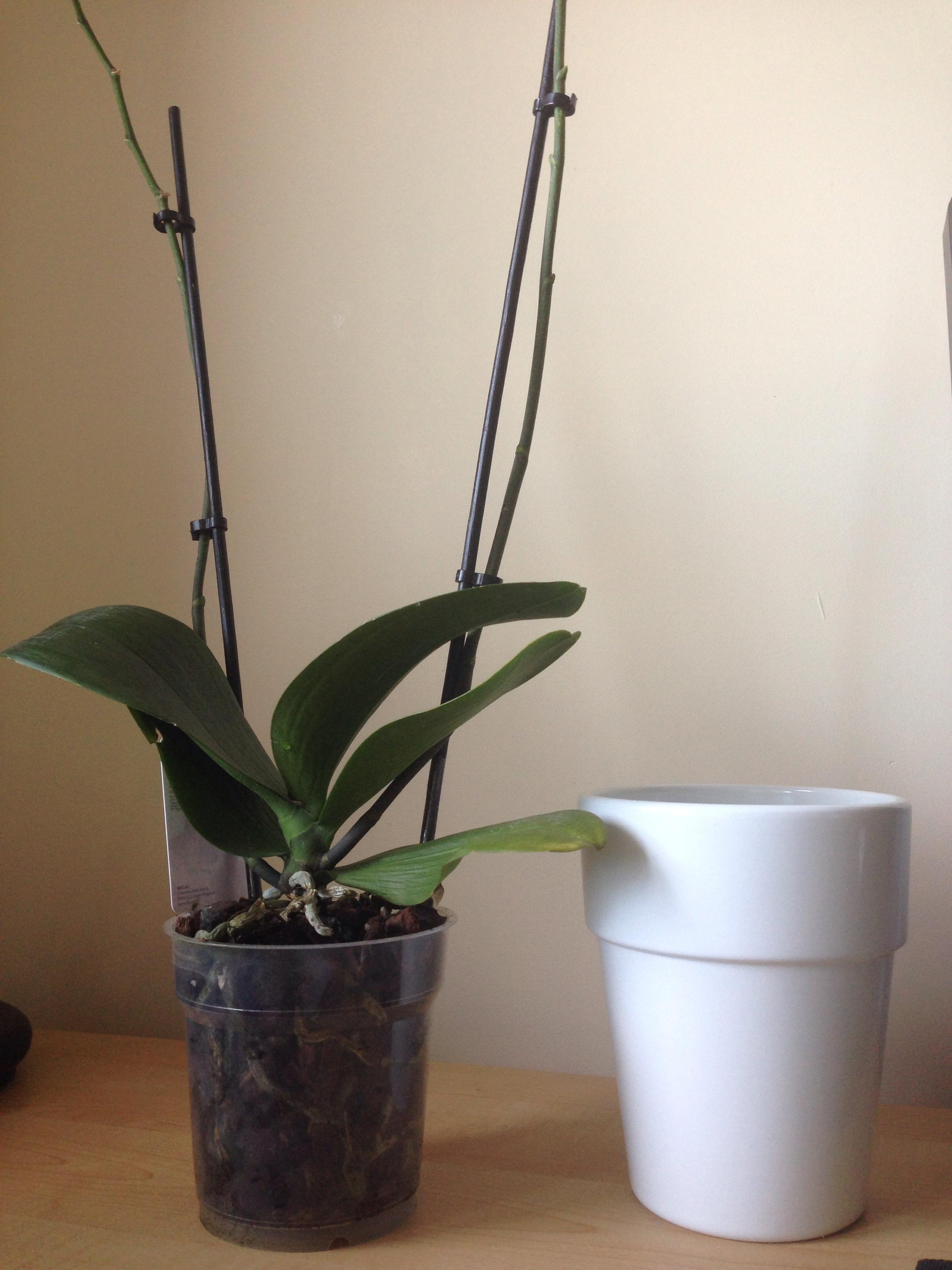 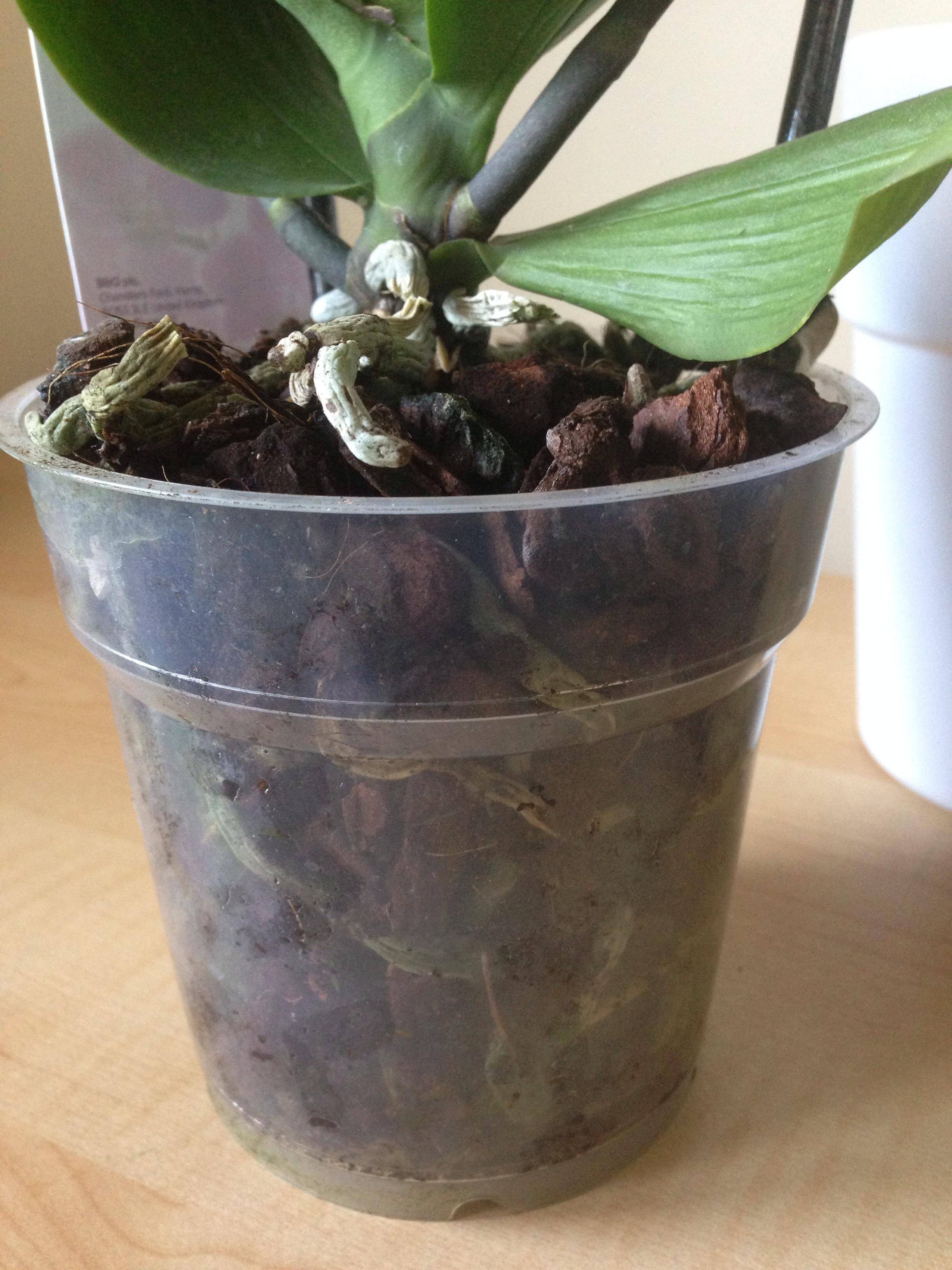 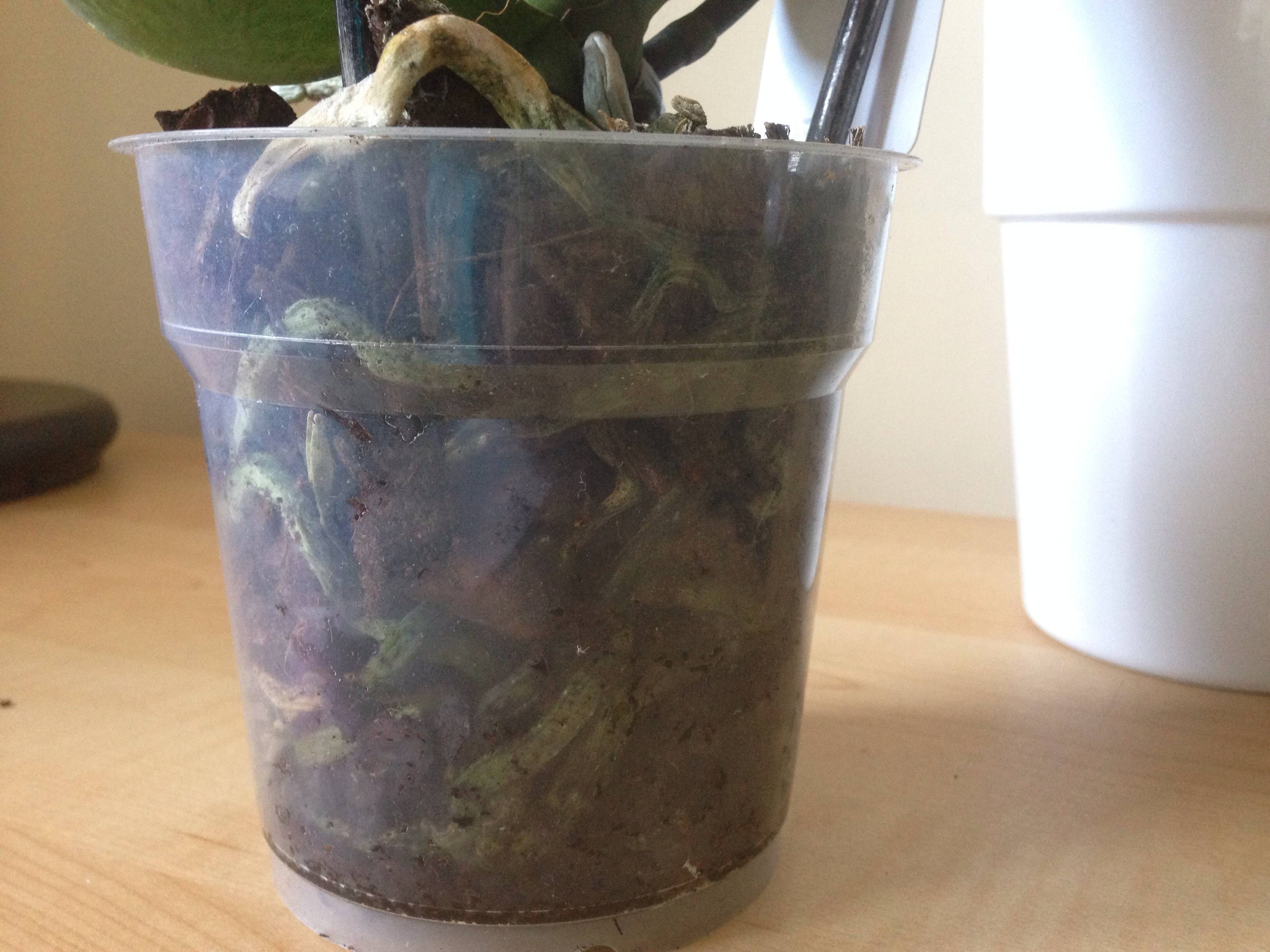 P.S. Both pots are kept in the bigger ceramic/porcelain pots.

I've done further more investigations about the problem as I got no answer here; going to a gardening store and trying to get some help, but even those people weren't super helpful. The suggestions I received were to let the roots receive sun through the transparent pot, and some other advice like trimming the green live stems that did not make sense to me.

Answer for pot #1: I inserted the support stick carefully and hooked up the stem to it very gently. It's gradually growing vertically and I think I can make it even more vertical little by little over time.

Some of the roots looked dried and rotten, as I think I had over-watered them at some point. I took out the plant and trimmed the roots carefully, and removed all of dry or rotten ones. I also cut the one leaf that was going yellowish.

I've moved my pots away from the window which was obviously colder than other parts of the room, and have placed them close to the radiator. Both pots seem to be doing better over there.

The second pot doesn't seem to have improved noticeably, but it hasn't gone worse either. I'll update my post later with the results after letting the plant settle down for a while.

Update: As of now, the pots have both been doing great. The first one has got lots of blossoms and flowers over months, and keeping well, growing more and more media: 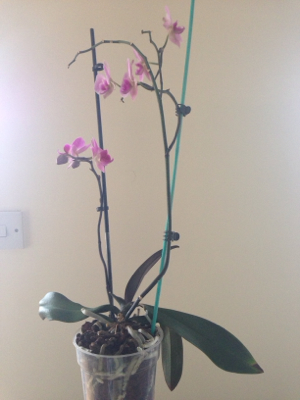 My efforts with the second pot which was almost dead, was pretty helpful and it started growing back. The roots are much better, and so are the leaves, and it's full of blossoms and flowers. 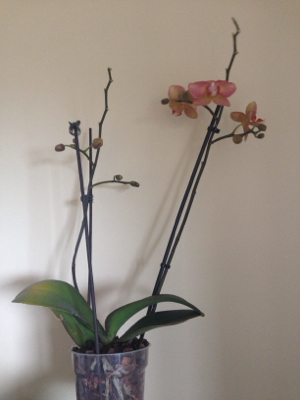 I've also learnt to water them with a spray, aiming the roots mainly, as otherwise, the water just goes straight down and doesn't necessarily reach the roots as fine as it should or too much water gets there. Some care and love is the key to have healthy plants! (:

Not the answer you're looking for? Browse other questions tagged houseplants plant-health orchids or ask your own question.

16
My orchid has one yellowing leaf. What's gone wrong?
5
Are these orchids dying? They are flowering but the leaves are turning yellow
3
What's Wrong with this Orchid?

16
My orchid has one yellowing leaf. What's gone wrong?
3
Lilium flower withering
5
Is this Schefflera overwatered?
5
Should I repot these orchids
6
Orchid on branch: What carrier could work?
3
What’s wrong with my tomato plant?
2
Is this soil any good?
2
How to take care of White Sandalwood Plant in the Pot?
1
How to take care of this orchid
2
Orchid buds yellow and fall off