Can I graft a branch of a sweet orange onto a sour orange tree to get sweet fruit?

I have two old citrus trees, one bears sweet navel-type oranges and the other has hundreds of impossibly sour, tiny oranges.

Would it be possible to chop off a branch from the sweet tree and attach it (graft it) to the sour one, to create a new tree, bearing sweet fruit?

If you are comfortable with rind grafting (pictured below), Then yes, these trees are compatible. This is best done in early spring just before bud break. Be sure you leave some original growth, to support the whole thing while the grafts take. This is the method used for changing larger trees for different fruit. The picture below is from an apple tree, which is one of the easier trees to graft. Oranges will be tougher, as the scions aren't deciduous, and will tend to transpire too much. 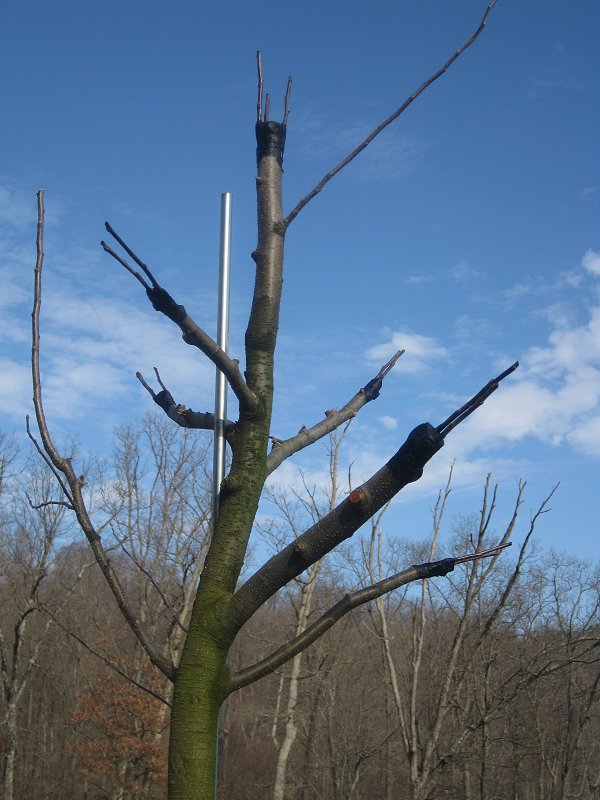 Well you could, but I don't think it'll work too well. It's likely that the sour orange tree was once just a rootstock with a different, most likely sweet, orange grafted above it. Since that original graft has obviously died back/disappeared, the rootstock has taken over and grown away in its own right, so your grafting a piece of the sweet orange onto one branch might mean, if the graft takes, that one branch will produce sweet oranges, but the rest of the sour orange will still be present, taking away nutrients from your grafted branch. Once rootstock takes over and grows on its own, it's usually much more vigorous than the grafted parts, so any attempts to graft it now, at what is presumably a large and mature size if it produces that many fruits, will likely be futile.

Try it if you want to though, otherwise, your sour oranges might make very good marmalade.

The tree that produces sour fruit is undoubtedly a rootstock. Sometimes the rootstock below a graft of a desirable citrus variety will produce a sucker or shoot of growth. If left to grow, such a sucker may outgrow the desirable variety and take over the tree. This is likely what happened to your tree. To convert such a tree to a desirable variety again, the best method would be to cut the tree down to a stump and top work it via the method shown in this video on my YouTube channel:

How to Graft Citrus

Since you will be grafting to a large stump, it would be best to graft multiple scions rather than just one.

A single navel orange tree can produce more than enough navel oranges for an entire family, so it would be better to order budwood of another variety to graft to your rootstock. The following video will show you how to order citrus budwood from California's Citrus Clonal Protection Program, again on my YouTube channel:

How to Order Citrus Budwood

It is important to remove the suckers from the original rootstock; if not removed they could again overtake the new graft.

6
Can citrus tree health affect the seed count in the fruit?

8
Is it possible to graft fruit/flowering trees onto a well established jacaranda tree?
9
Can I graft a Navel or Valencia orange tree onto an established citrus tree?
6
An evolution in grafting
4
Is it possible to graft together a self-pollinating cherry tree?
6
Why does the lime half of a grafted tree suffer, while the lemon half thrives?
6
Is there a limit how many branches I can graft onto a mature apple tree?
7
Is this a sucker? Can they grow above the graft line?
2
Can you graft onto the stump of an established apple tree?