What is 'Apical Dominance'?

When pruning trees, most notably conifers, you must be aware of a phenomenon known as 'apical dominance', when choosing your pruning technique, and selecting shoots for the permanent structure. What is apical dominance, and what does it look like in plants?

Apical dominance is a type of growth habit in woody and herbaceous plants where an apical bud (or a bud at the apex typically the top) secretes growth hormones down into the plant that dictates the growth habit for the entire plant. The best example is seen in Firs and Spruces that naturally grow in a conical formation. The apical bud is controlling the breadth or spread of the lateral branches. The further away from the apical bud the branch is, the wider it can grow because the hormones are not reaching it in a high enough concentration. In some species, when the apical bud is damaged or removed, it can send the tree into crazy growth patterns. Most often the plant produces another apical bud and continues its normal growth habit. Grafted evergreen can sometimes take a while to regain their apical bud and grow for a few season with out a nice shape.

There has been some considerable research into apical dominance, such as published in the paper Apical Dominance and Shoot Branching. Divergent Opinions or Divergent Mechanisms?1 (Dun et al. 2006), that describes the phenomenon as

the control of the shoot tip over axillary bud outgrowth

Essentially, according to the webpage Apical Dominance, the process is summarised as

In some plants, the lateral bud located in the axil of each leaf does not grow to form branches, especially at first. This condition is known as strong apical dominance.

Examples of what strong vs weak apical dominance are presented in the Real Green's webpage How to Prune a Tree or Shrub: 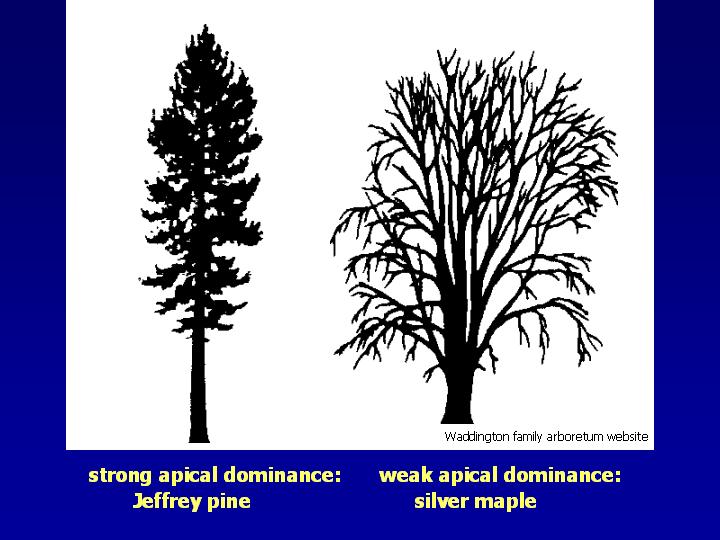 Essentially, the main stem is allowed to grow, while the lateral stems remain largely dormant. The commonly held reason as to why is due to auxin concentrations; however, in Dun et al. 2006 and in the paper Sugar demand, not auxin, is the initial regulator of apical dominance (Mason et al. 2013), research in the latter suggests that apical buds demand for sugar, thus limiting the sugar availability to other buds as a viable mechanism.

Not the answer you're looking for? Browse other questions tagged trees growth terminology or ask your own question.

10
Can I keep my Japanese Larch small by pruning?
7
How can I promote new growth on a section of my Jade cutting?
5
What is the proper way to prune a pear tree?

20
How much should blackberries grow in their first year?
14
Is there a traditional method/style for pruning a Chocolate Silk tree?
6
What is the best way to keep a tree growing straight?
8
Bay Leaf Tree (Laurus Nobilis) with severe scale
4
How to encourage weeping cherry to grow larger
4
Which of these trees are good for growing as a Christmas tree in a pot?
5
What kind of plant will my Red Cherry Plum stems grow into?
9
London garden lawn and tree positioning
1
How do you go about identifying cypresses?