How does a bow-knife weed cutter compare with a string trimmer?

In hard-to-mow areas, I use a string trimmer to occasionally cut back the weeds. I recently found a tool for sale which could potentially be used in a similar fashion, but without any gas. It's called a Bow-Knife Weed Cutter. I found it here, but other people sell similar tools. It looks like this: 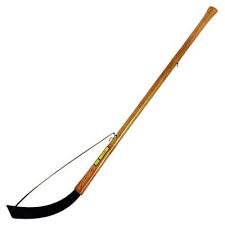 The spring blade can be released for storage, and sits straight. I realize it may take more energy (which I don't mind) but it is also considerably lighter in weight than a commercial grade string trimmer.

The customer reviews I've read seemed fairly contented, but there weren't many.

The scythe is a similar tool and the bush blade scythe is built to handle similar conditions as this tool. Typically the blade is sharpened with a whetstone every 5 minutes or so and then less frequently it is peened. Keeping these tools sharp is critical or they aren't going to work well at all. A neighbor was using a similar tool last week and it was clear that he doesn't sharpen it often... looked very tiring.

That's not all that long a blade, compared to a scythe, and while you're not swinging a heavy tool (thankfully), you are doing the high swing technique which means that most of the time the blade is not in contact with grass/brush but rather in the air. Cutting through brambles is a pain in the rear with a standard string trimmer but is reasonably easy to do with a brush cutter (DR makes one as do other vendors). So with a standard string trimmer you'd need the cutting head (there are several types - blades, single blade, etc.) to make any progress with brush greater than, say, a drinking straw's diameter. My brush cutter has a floating head and two wheels and thick line. It cuts through brambles well though not above maybe the thickness of my index finger. That tool you're looking at will cut through most of that but you'll be swinging often - good workout but it takes time. A bush blade scythe might be more effective and less tiring.

I'd probably opt for the properly sized scythe with the light bush blade for work like this. They are, though, about 3-4x more expensive. For small areas, this tool you've asked about looks like it would work reasonably well.

3
How do string trimmer accessories compare to dedicated tools
5
How to replace my gas hedge trimmer rope starter
8
How can I weed trim without damaging a fence?
6
Should I trim my conifer hedge with shears or an electric trimmer?
5
How do electric tillers compare with gas powered ones?
2
Does a Hover mower with roller or a cylinder mower with roller better fit with my requirements?
6
What is the name for a weed-eater head with metal or plastic blades?
5
Can my weed wacker designed for .065“ (1.651 mm) trimmer line handle .08” (2 mm) one?
2
How do I replace string or open string head in RYOBI 40V-X Expand-it String Trimmer?
2
What equipment to use for a large garden/lawn?