I've got three Photinia fraseri trees in my yard in Tucson, Arizona. They were planted last May (2013) and now in September (2014), one of them is turning entirely brown and losing all its leaves (over the course of the past month or two).

The branches are still soft, so I don't think it's dead (yet). Is this a disease?

The other two trees seem to be doing much better and they're all on the same irrigation schedule, etc.

(The black marks on the bark are from Spectracide pruning sealer applied after planting because the support post had damaged some of the trunk/branches prior to planting.)

Whatever happened to that first tree looks like it's starting to slowly happen to the tree next to it. I used a cheap soil test-kit -- and it appeared as if the pH was slightly high -- so I've been trying to flush the soil with some long, deep waterings (although it doesn't seem to be helping).

Um, what is up with moderators coming in and changing the content of our posts? That change mis-characterized the time frame I was describing -- not 4 months, but 16 months. Please refrain from the gratuitous grammar corrections ("3" vs "three", really?). There's already an exchange for that: http://english.stackexchange.com. 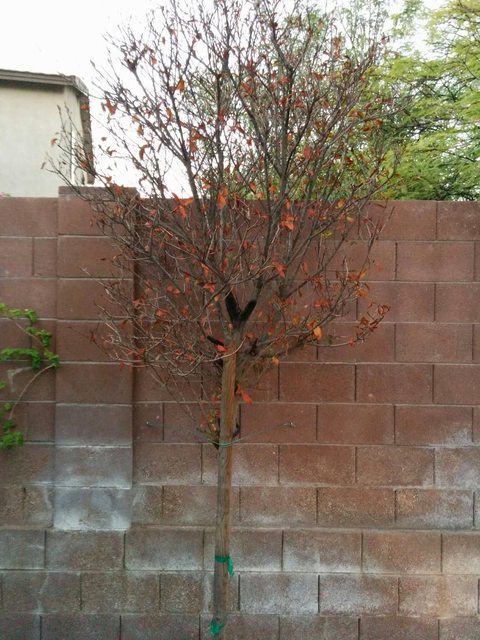 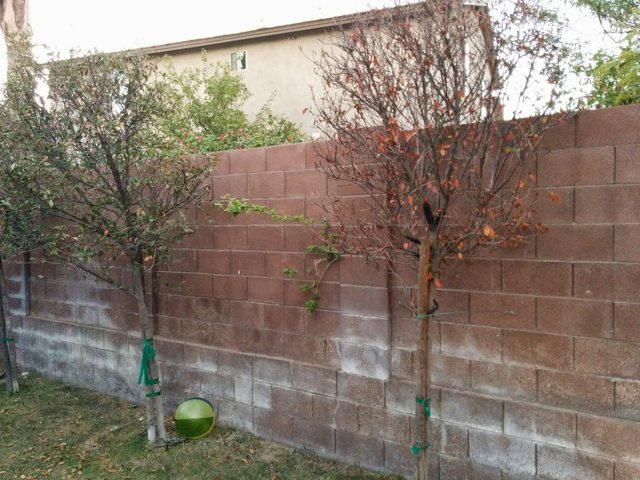 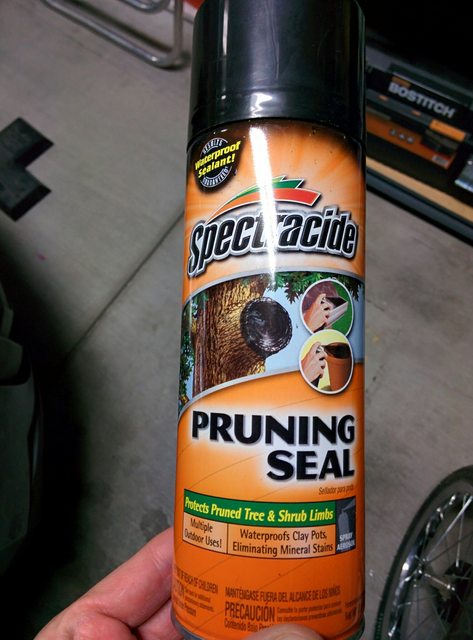 This is a long-shot, but it almost looks like it has been burned. Does that section of the brick get more sunlight throughout the day than where the other trees are? Are there buildings or trees partially shading the other trees? Is there a window that reflects light onto that spot for a period of the day? If so, it could be that the bricks there heated up to the point that they baked the plant. I've seen examples of plants in a single pot being scorched by sunlight reflected from a large window while their neighbors in nearby pots did just fine.

Also, do you know what is on the other side of that wall?

I'm curious about something - you say you planted these shrubs in May, 2013, which would make it only 16 months in your garden, but the size they are suggests they're much older than that, so you maybe bought them as mature shrubs, is that correct? If you did, mature plantings often don't do so well, not having the same lively urge to grow as younger plants, so any hint of dryness at any time, or anything that's not perfect for them, and that could have been enough to make them suffer and possibly die altogether.

The only other possibility that comes to mind is fireblight - this particular one does have a somewhat 'burned' appearance, and that's not uncommon with fireblight infection. While the disease is actively spreading, you can peel back the bark on a recently affected area and you should see a foxy brown staining insde the branch. The fact that its spreading to another of the plants might indicate fireblight - or it might simply indicate the 'prima donna' nature of transplanted mature shrubs.

Regarding the pruning sealer, although I couldn't access a full leaflet for it, nor establish quite what the ingredients actually are, it does say quite clearly on the back that it's for use as a pruning sealant, so I doubt its caused a problem - I was merely concerned you might have chosen to use something less suitable (I've known people use creosote and then wonder why the plant's died).

Looks like sooty mold on the trunk. The tree should be taken out and replaced as to not infect the other trees. I am assuming they are less than a year old since they are still staked. Many nurseries have a 1 yr. guarantee so I would take it back for a replacement. If they are more than a year old those stakes should be removed. There is salt in the water as you can see by the wall but salt damage looks different that what I see. I've seen salt damage on a lot of plants but not on Photinia. They seem to take salt well but to be on the safe side flush now and then with a deep water ing.