What plant has no foliage and clusters of red berries on top of a fleshy 1' stem?

I have strange plants growing among my redcurrant/raspberries and close to cobnut trees . They have a single fleshy stem, no foliage, are about a foot tall and have a cluster of bright red berries at the top 2-3 inches of the stem. I had thought that they were some sort of fungus, however they have roots like a small rhizome and are also in clusters. What are they and could they be harmful to the other plants nearby? The redcurrants have been poor this summer, and one bush has had to be dug up and destroyed.

Most likely Arum - Arum maculatum or Arum italicum in particular. Common names include Cuckoo Pint, Lords and Ladies in the UK, with other common names in other parts of the world. They do have leaves earlier in the year, which you may not have noticed, but by the time the berries form, the leaves have all died back. Contact with any part of the plant may cause an allergic reaction in some people, but only the berries are toxic - said to be highly so if ingested, though there is some argument about that. The berries contain something that makes consuming them like eating needles, so most people never eat enough to be killed, though swelling of the mouth and tongue might mean they asphyxiate. They're commonly found in association with trees, and in disturbed soil (disturbed can mean simply cultivated). The only thing that gives me pause is the height - usually, the stalks with the berries clustered around are about 6-8 inches in height. Be good to see a photograph. There is no evidence that they are allelopathic, though the presence of this plant in quantity could mean deprivation of nutrients and water to your other plants in the area.

Pictures of A. italicum: 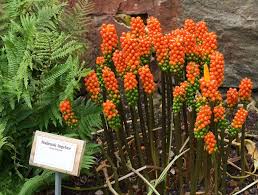 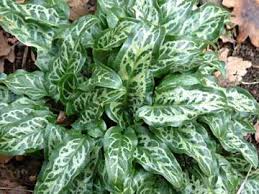 Pictures of A. maculatum: 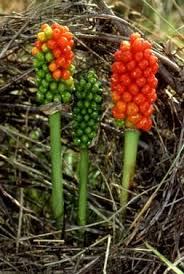 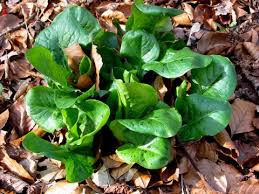 5
What are these 3-foot tall plants in southwest Florida?
7
What's this strange large growth on my new asiatic lily?
7
Help Identifying this Plant
4
What is this bush with small yellow flowers and an orange substance in the stems?
5
What is this plant which looks like chives?
4
What is this plant that has small red flowers and paired fleshy leaves?
7
Identify clusters of small red and green berries with tripartite leaves
1
Guess this green leaf and red stem plant
2
What are these tiny spherical green eggs on my sweet peas?