What causes cucumber leaves to turn yellow, brown, wilt, die, and the plants to stop producing?

Every year it seems my cukes will go gang busters then suddenly the leaves turn yellow (starting with yellow spots), then turn brown, wilt and slowly die off. This all happens from the root crown and works its way out. I have pictures of early producing growth from about 2 weeks ago (mid-August 2014) and how they look now....Sept. 2 2014. The pictures may be most helpful. I see no insect activity, but I do have voles/moles in the area, but not every year. I live in Southwest PA, near Johnstown. Anything else I can answer please ask...Thanks Bill!

Update...planted in early June...the 2nd picture (should have been first) is the same plant about 3 weeks ago. I have added some pictures....yellow spots were scattered over the leaves but did not turn into holes and I see nothing that I think would be powdery mildew. This area is fairly wet, not the best drainage but it doesn't seem overly wet.

As an aside, what is that weed in the last few pictures? (My Mom called it the portulaca weed, don't know why), but I can't eradicate from my garden, seems to be self-rooting! 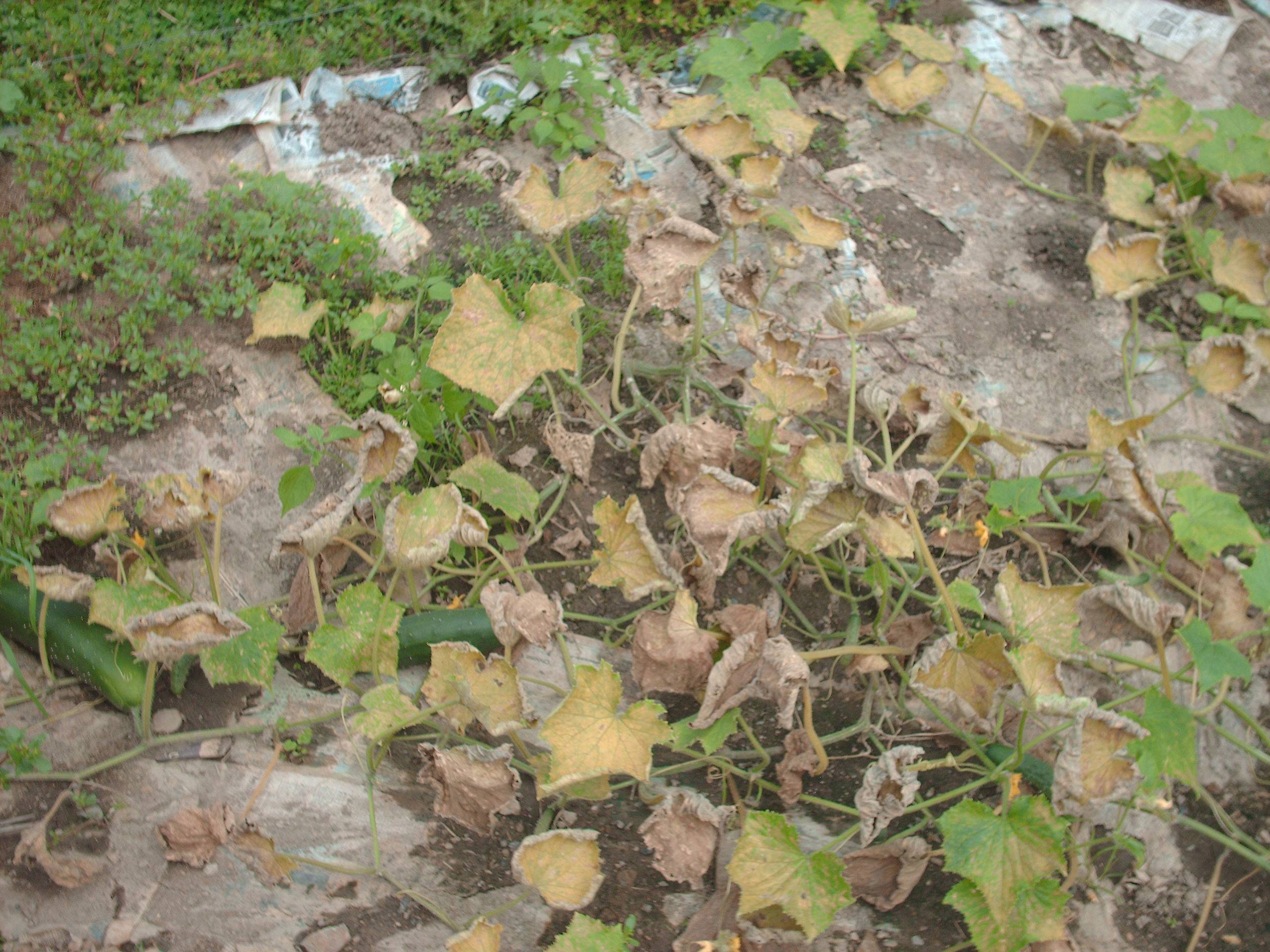 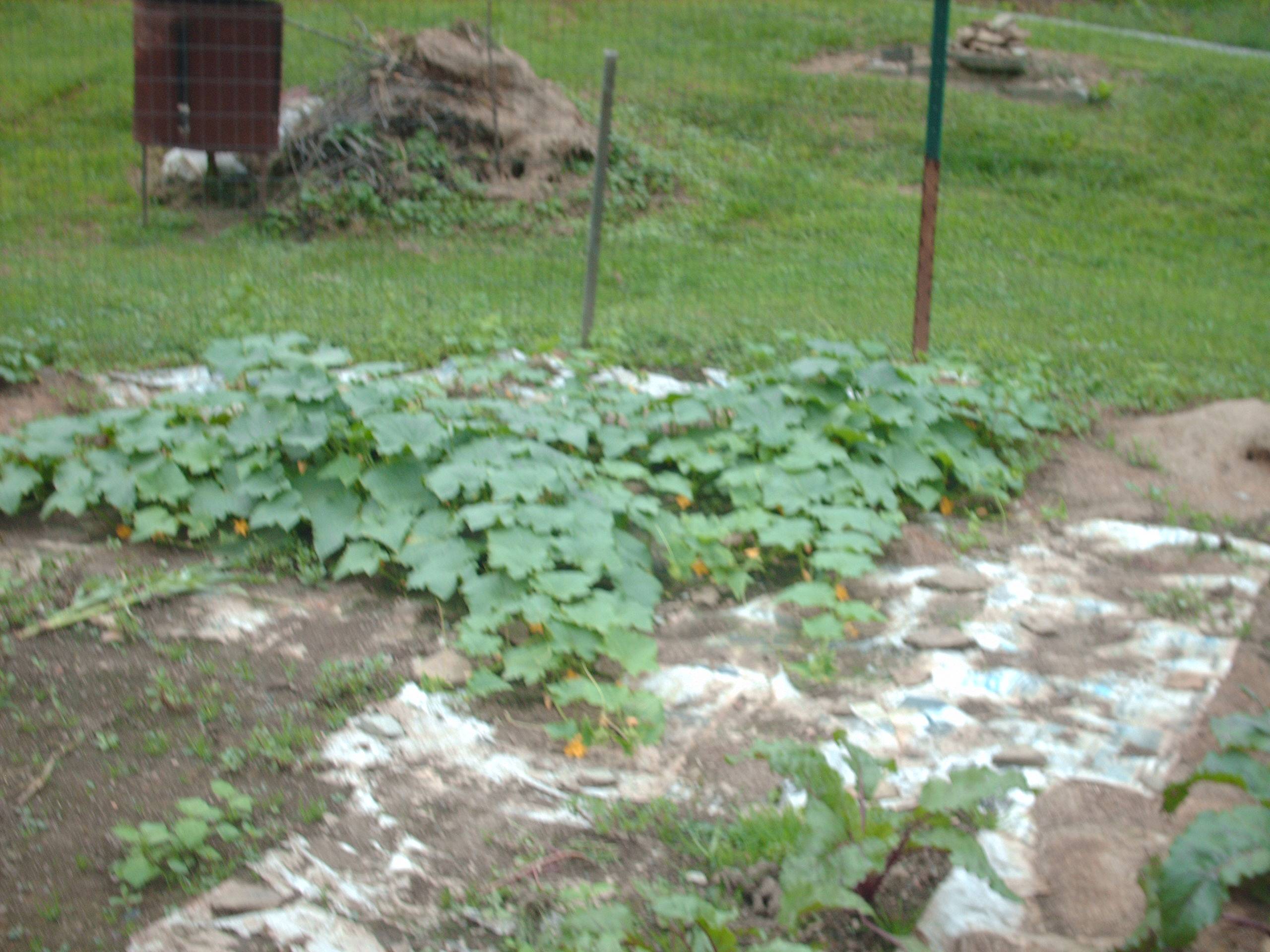 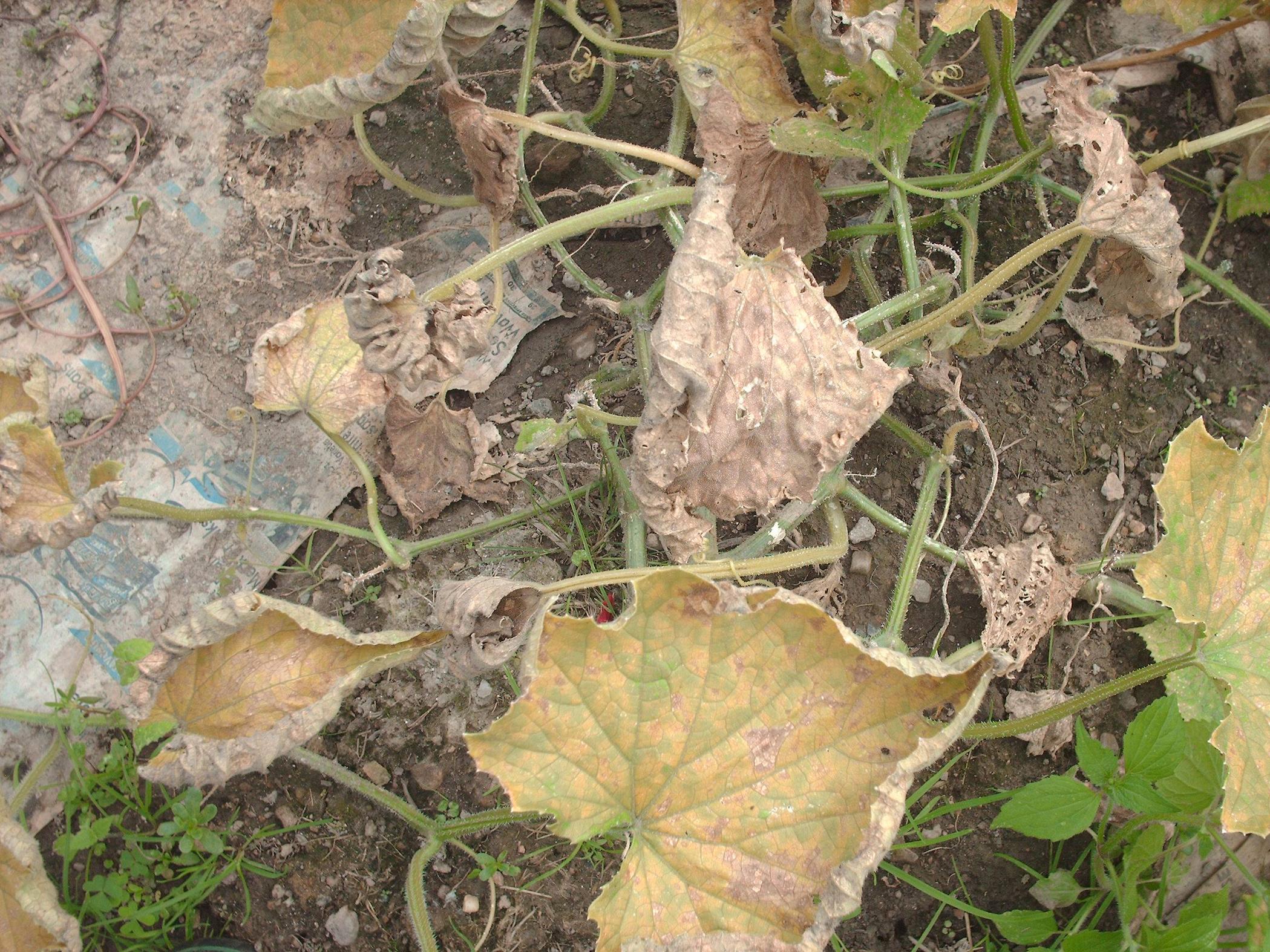 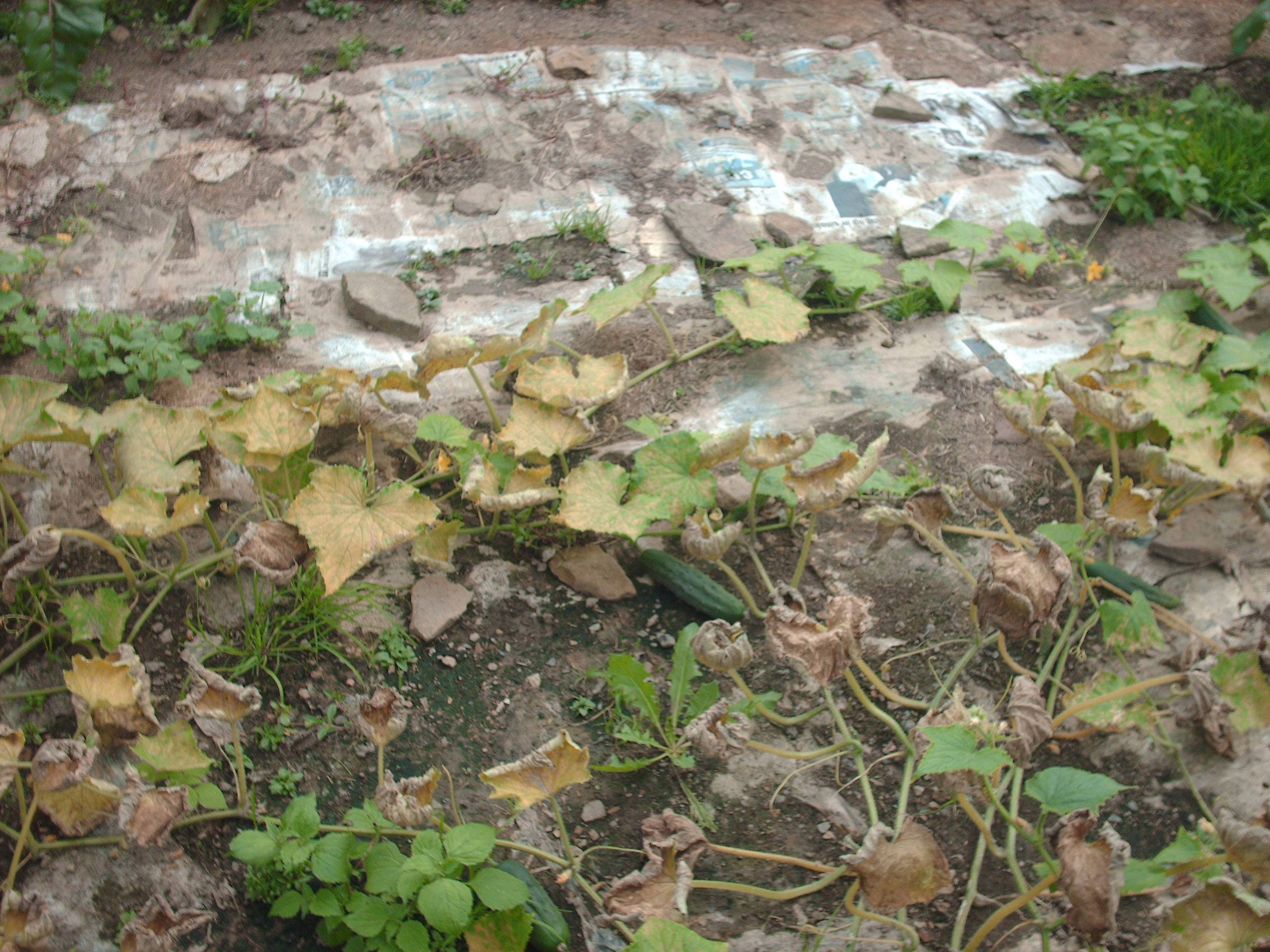 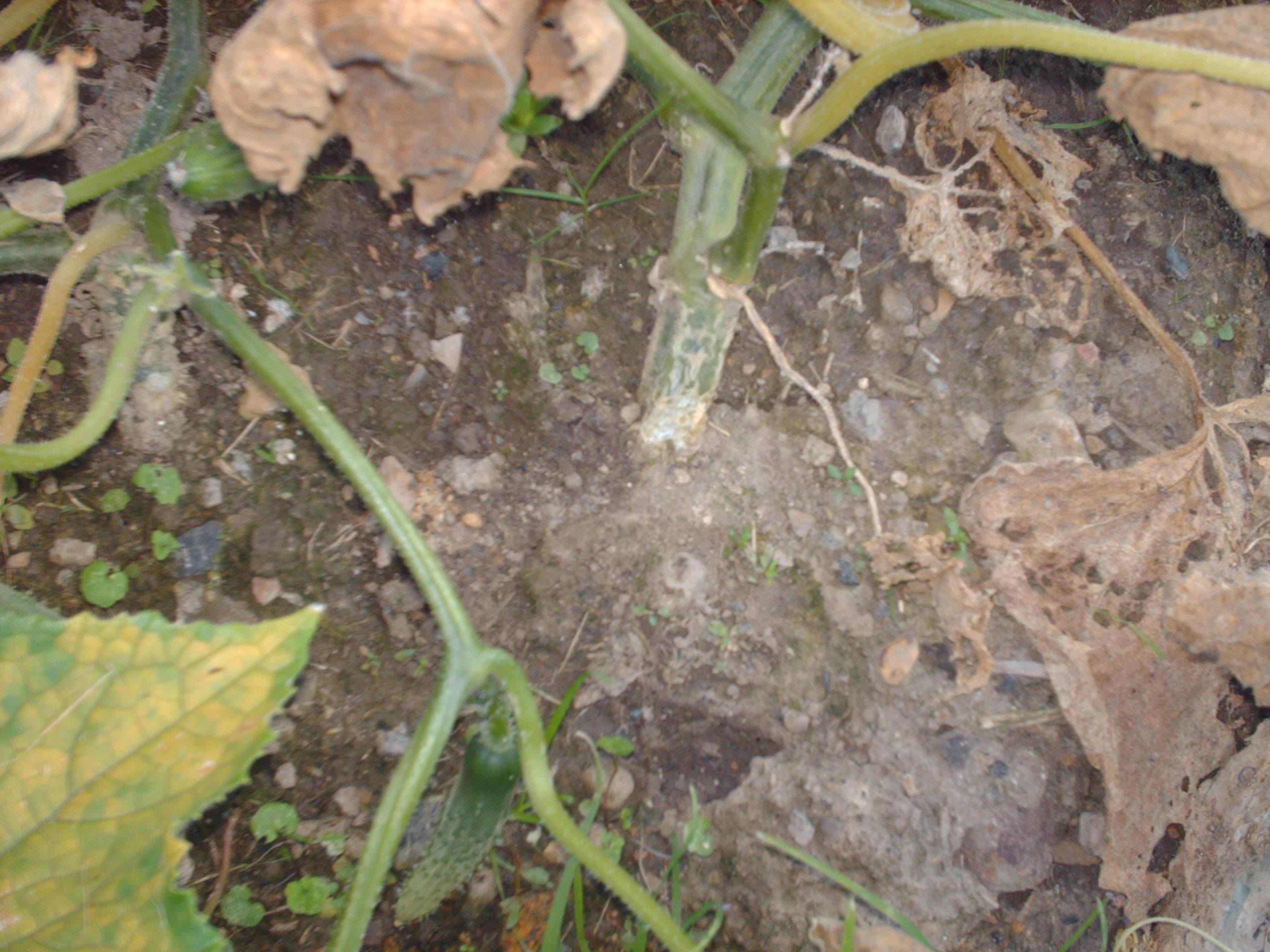 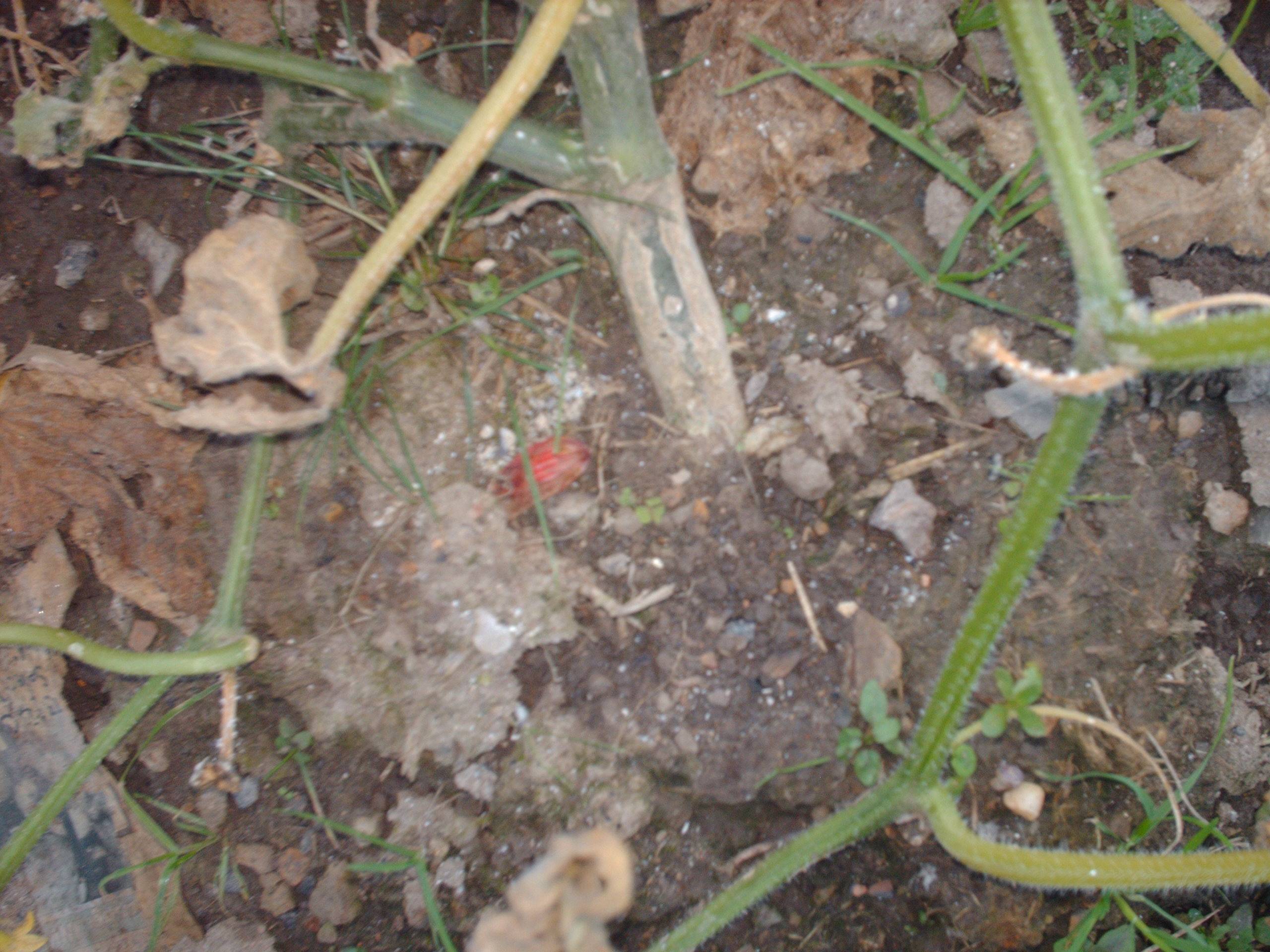 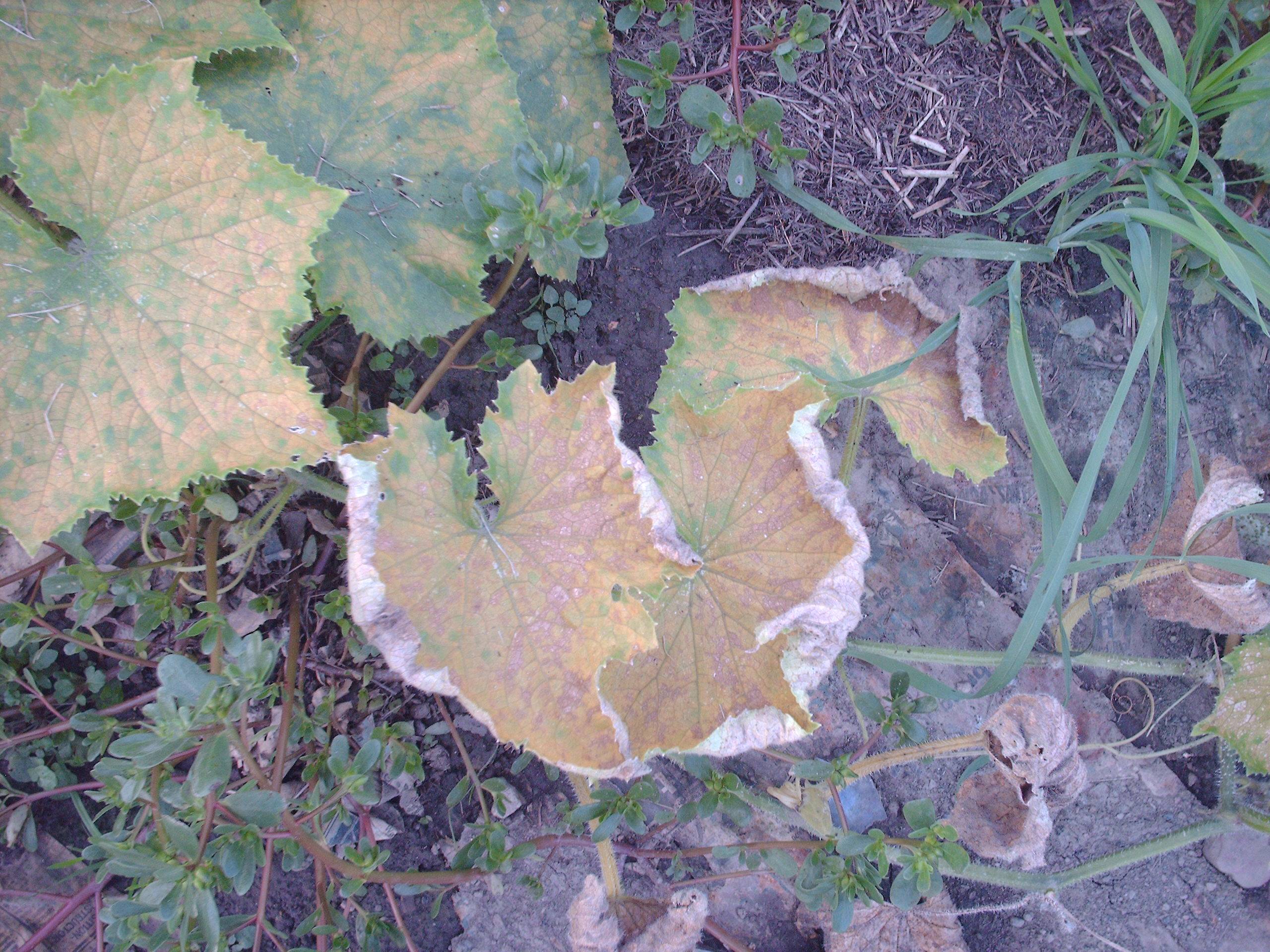 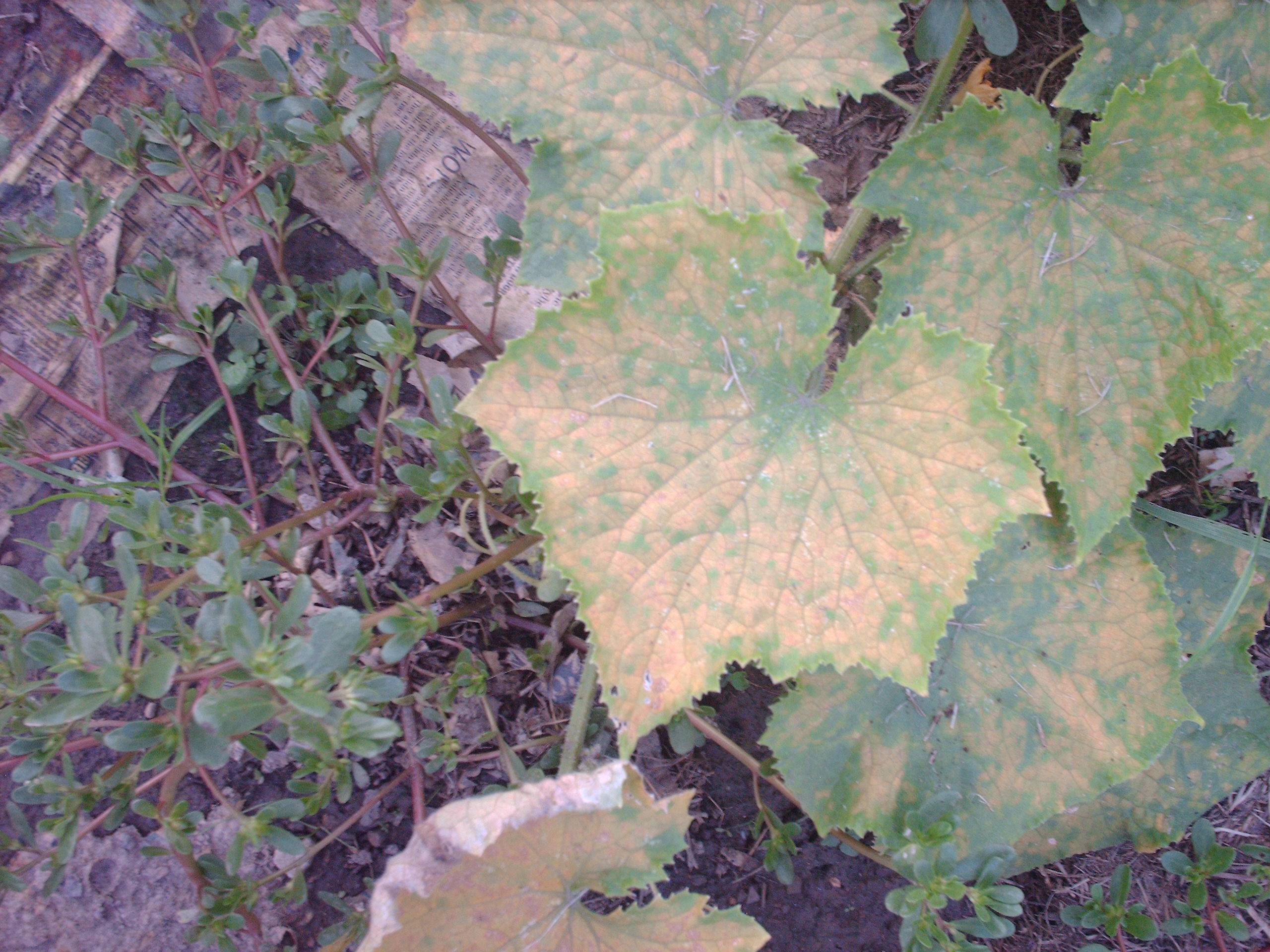 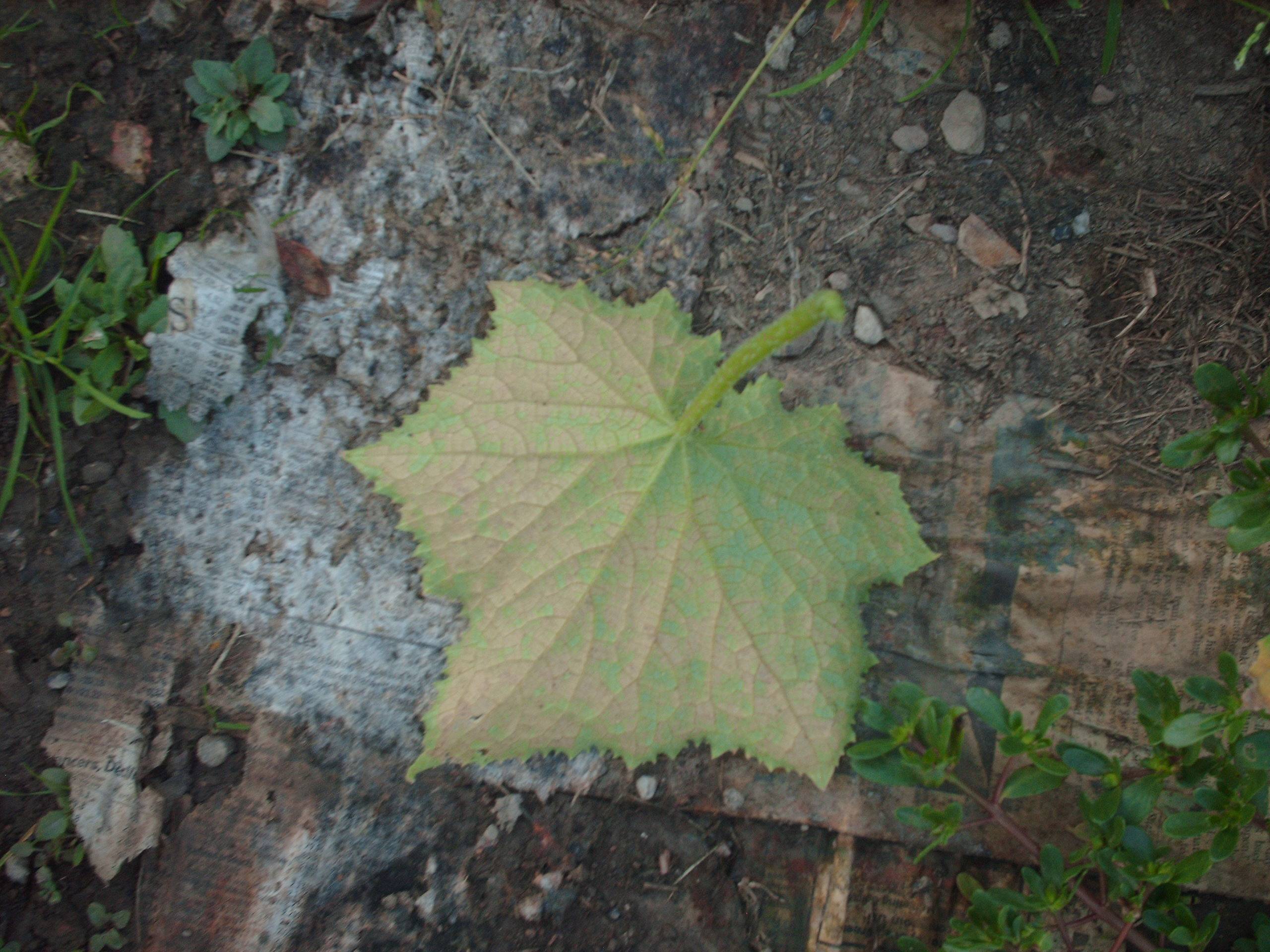 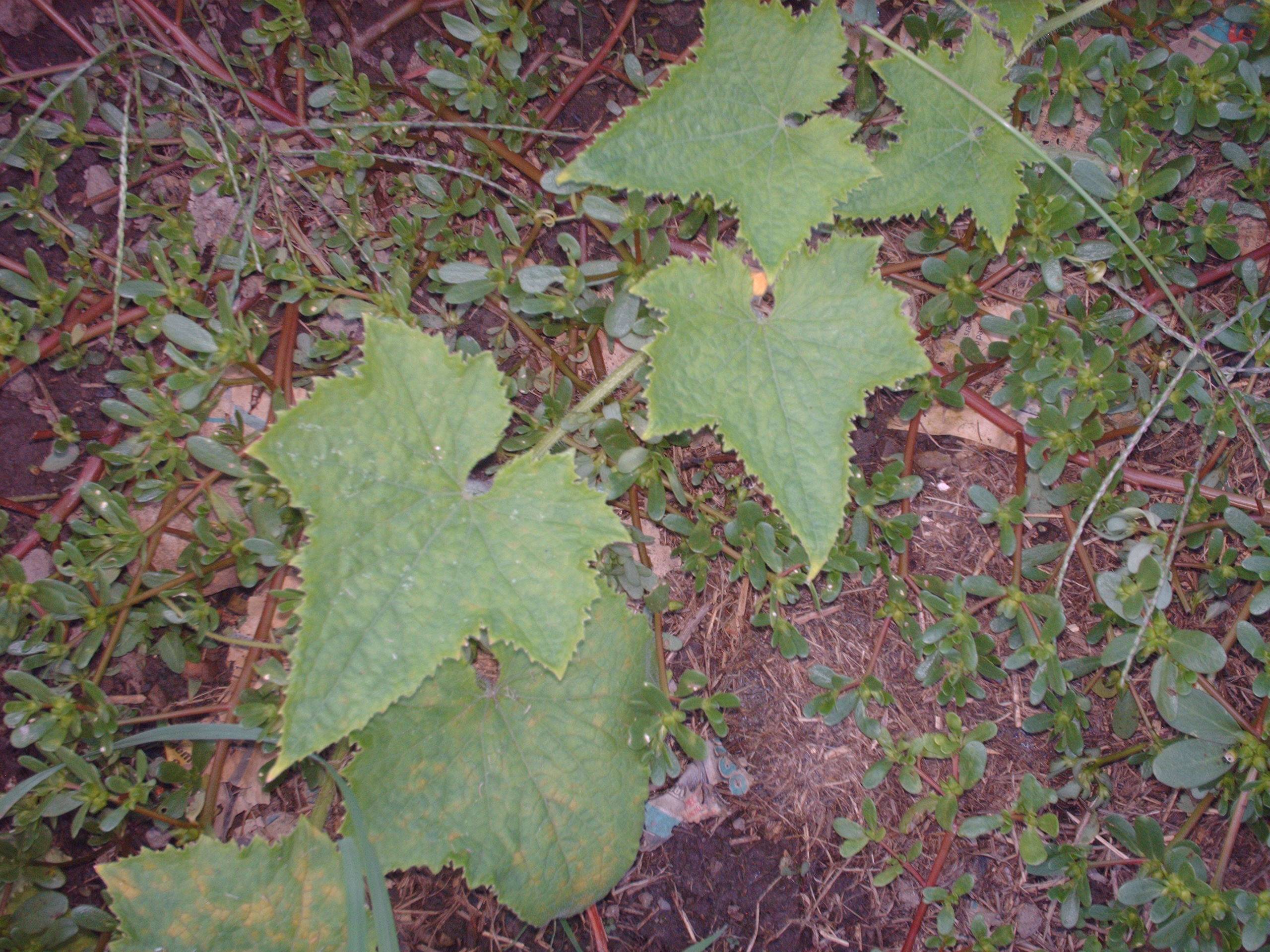 I think you have Cucumber mosaic virus, because of the mosaicing, curling, and drying of the leaves, and the stop in production, plus the time frame of infection matches perfectly.

There is no cure. What you can do is try to keep it from spreading, which is done by removing affected plants from the environment. Burn or seal them in bags to prevent the virus spreading. Do not add to your composting system.

It is spread by any insect that feeds on cucumber family plants. When they land on an infected plant, and then land on another one, the disease will spread. I would suggest that you remove the affected plant immediately, and keep an eye on the remaining one. If the other one hasn't contracted the disease, yet, hopefully removing the mosaiced one will greatly decrease the likelihood of contraction. Another thing that reduces (but not eliminates) the chances of catching the virus is laying out an insect barrier early in the season. This keeps away most contact with virus carrying insects.

And the brown spots at the base of the stem appear to be corking, which is when an herbaceous plant builds up corky material on older stems when they increase in diameter.

Cucurbit plants may become infected at any stage of growth, from emergence of the seedling to near maturity. External symptoms may develop within four or five days after young plants become infected, but may take up to 14 days to develop when the foliage is older and more mature. Symptoms develop more rapidly at 79° to 89°F (26° to 32°C) than at 61° to 75°F (16° to 24°C). The severity of symptoms is at least partially related to the virus concentration. CMV symptoms in cucumber are more severe on plants exposed to short days or reduced light than on plants exposed to long days and bright light. Cucurbit plants rarely become infected in the seedling stage. When this happens, the cotyledons may turn yellow and wilt. New leaves are slightly mottled a yellowish green, remain small, wrinkled, and distorted. Plants infected in the seedling stage remain dwarfed or may die, and seldom produce fruit. Source

As for the weed you wondered about, that's purslane. Your mom was right, it is in the Portulaca family. It is edible and nutritious, albeit bad tasting to many.

I suspect an infection - what's important is the precise nature of the yellow spots when they appear - you've said it starts on the crown of the plant, which I take to mean the oldest leaves - if the spots are pale yellow, followed by grey fuzz or felt which might cover the leaves, it's powdery mildew. Left untreated, it will cause the results you show in some of your pictures.

If, though, the spots appear near leaf veins, roughly circular but not necessarily, and those 'spots' turn into holes, it's anthracnose, but there's no evidence of that from the pics.

Otherwise, scab is a possibility - the spots which you see initially are grey with a yellow halo.

This answer assumes a contributory cause of the problem isn't lack of water.

UPDATE - I don't think it's any of the ones listing symptoms with holes in the leaves either, there aren't any holes to see in your pictures - more likely to be powdery mildew/drought than anything else on the list - dryness at the roots encourages powdery mildew. However, the extra pictures don't suggest typical powdery mildew either - what they do suggest is Downy Mildew rather than cucumber mosaic virus, there's no wrinkling, bubbling or torsion going on, which I'd normally expect to see with a virus.

So to sum up, I still think it's mildew - the one you get as a problem where you are is actually known as Downy Mildew, and it starts with this yellow patterning I can see on your added pics. Google Cucumber Downy Mildew and check the Images, or check out below:

I've also heard that cucumber plants can do this (yellowing/spotting of leaves) which can be caused by a magnesium deficiency and cured with Epsom salts. Here's a YouTube segment discussing this.

I live in Golden, Colorado and mine too interestingly began to have yellowing leaves and drying up recently (early September) as the author of this post. I have not tried anything on them yet and not sure it's worth it or if I would be able to bring them back at this point.

If this is still a problem, to help keep pests away, plant garlic nearby, but maybe not in the same bed(it can affect flavour in some plants I think? I don't really remember.. xD) also, using a yellow solo cups with Vaseline to catch aphids is something I'm trying this year!

Yes, it is cucumber downy mildew, which is a recurring problem in the eastern seaboard of the US. You can follow disease spread from this link http://cdm.ipmpipe.org/scripts/map.php and take preventative measures. We contribute to the monitoring of disease and provide most effective recommendations to cucurbit growers

9
What is this succulent weed?
5
Cucumber plant turning yellow and babies dying

5
What's wrong with my tomato plant?
7
Why are my Dracaena marginata leaves getting brown spots and falling off?
3
What causes the stems of sunchokes to turn red and lower leaves to die?
0
What causes tomato leaves to wilt and die from the bottom up?
3
What would cause pale patches and little brown spots on my Lemon Balm leaves?
5
cucumber plant leaves turing yellow, brown and dying
5
Cucumber plant turning yellow and babies dying
4
Why has 20% of my pumpkin plant suddenly died and how can I save it?