Why does my Goji Berry produce many flowers but never bear fruit?

I have a 4 foot tall Goji Berry plant that has been prolifically producing flowers all year long. None of the flowers ever become fruit. I've witnessed hummingbirds poke into each flower because they love purple flowers more than any other color. That means they should be pollinated, right? The dozen other fruit trees in my garden have no problem pollinating naturally - I have many wasps and bumble bees.

It might be diseased. Most of the time, it has what appears like talcum powder on its leaves. I sprayed it down with neem oil once and it went away, but came back within a week. Maybe the powderiness is natural to its leaves??? 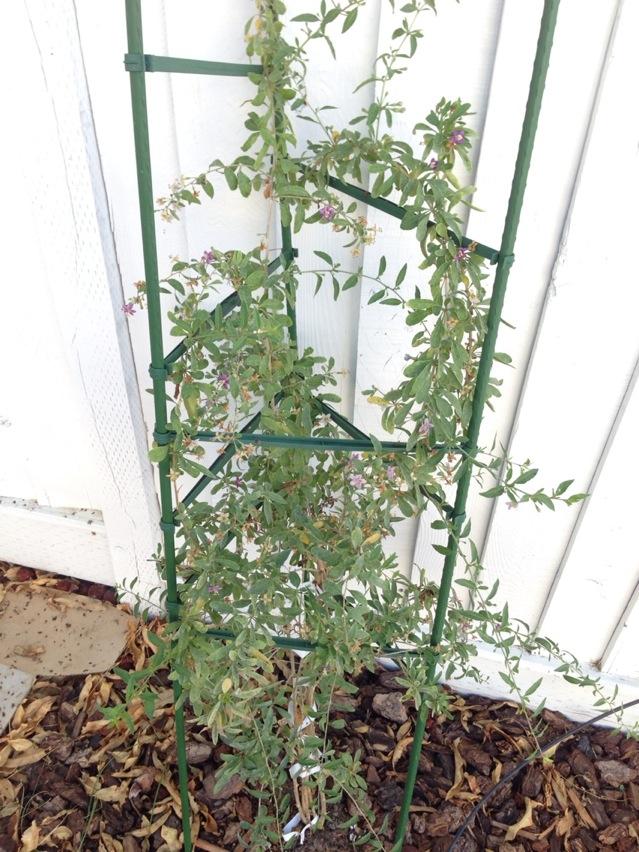 In fact, I wouldn't recommend trying to grow them in the Pacific Northwest as it's too damp here. In 10 years of trying, they leaf out lushly, and about a month later start mildewing. Nothing you do will get rid of the mildew as it's a systemic problem with the plant.

I've only ever gotten about five rather bad tasting berries off of them. In the same growing area we could have harvested a couple gallons of Blueberries.

We finally just uprooted them all, sent the stumps to the dump and tossed the rest into the compost heap as a failed experiment.

I've never grown a Goji berry plant but have read a bit about them and recall a couple of things from the reading. First, I recall that some other folks mentioned that they could not get their Goji berry plants to fruit either. It was speculated that it might be a particular variety of the plant and that certain ones were more likely to fruit.

The second thing I recall is that at least two writers mentioned that it took a few years for their Goji berry plants to produce fruit although they flowered each year. The pictures I saw - again, going from memory here - were not unlike the one you posted.

It is possible that you've got some sort of disease but often when plants are diseased they don't flower all that well. I'm certainly no expert on this plant, though, so it is entirely speculation on my part.

Perhaps your plant just needs time - as did the ones I mentioned - to start producing fruit and it might not happen this year. The plant is self-pollinating (I looked that up, wasn't sure) so that's not the issue. I imagine there will be someone with more knowledge than I on this who can speak about it though.

FYI: Chinense is also called "false goji" or just "wolfberry". They are mostly grown for their roots not their berries.

I had a goji berry in the Los Angeles area which flowered the second year and had lots of fruit. Maybe it was the variety but I do not think it takes more than a couple of years for it to fruit.

I read recently that goji berries are like nut trees-----they do not fruit until about 7 (seven) years old. I watched an extensive programme from Canada recently.

Use Neem tree oil, what i use is organic made by Garden safe its an anti fungal ,mite / bug replant. I use to have issues with mildew and aphids but not since using it on a regular basis, I would cease use a week or two before harvest as it can affect the berries taste.

Oh and as a after thought these plants are not really self fertile, you may just need another plant otherwise you will be stuck with a few chance berries. To get a bigger yield, I would recommend planting them 3 to 5 feat apart and as far as genetic diversity 5 to 8 plants, they should flower 5 to 7 times a year up to the first frost.

Not the answer you're looking for? Browse other questions tagged diagnosis flowers fruits pollination or ask your own question.

23
Why is an indoor pepper plant flowering but not producing fruit?
17
Why does my lime tree drop its fruit early?
3
Why does my Passion Fruit Creeper grow best in autumn and early winter?
3
Why doesn't my night-blooming Cereus produce flowers?
6
Why doesn't my fig tree produce fruit?
2
Why does my plum tree never come into fruit?
6
Why does my apple tree not bear fruit?
6
Why do my passion fruit flowers lack pollen?
3
Why would my goji berry plant in California get sick and full of aphids?
1
Why do people say rhubarb flowers, when I've never seen it flower for me?