What are all the methods to control powdery mildew?

This particular disease is totally vexing! I admit, I love cramming plants together, especially in a garden. I hate bare soil. I do prune for aeration. I do use free water to wash off leaves early in the day so they can dry by evening. I have used milk; to water plants for more strength (seems to work well) against fungus and virus. I have sprayed with milk. No difference that I could see. I do use mega fans all day and night for aeration. This is a virgin garden and typically all the squash, summer and winter, the cucumbers and tomatoes are always infected. As soon as I see any sign (usually the first cool nights of the summer) I spray with neem oil. It does not stop powdery mildew. Just slows it a bit. I wash vegetables to get rid of any Neem, I hope!

Is there an expert out there that has figured out how to control this fungus?

Stormy, you've said you used a quarter of a cup of milk to one gallon of water - I've no idea how that works out, but the ratio of milk to water is 1 part milk to 9 parts water, at a push, 2 parts milk to 8 parts water, though there is no benefit in using a higher milk ratio. I suspect even a cup of milk doesn't work out at one part - if you're making a gallon mix, you'd need more milk than a quarter cup (assuming a gallon in America is 8 pints, as it is here, though I don't know what your 'cup' holds. Milk spray is very effective for powdery mildew particularly (if you've got the ratios right), though you need to spray under and on top of the leaves and all stems, till run off, as well.

That time of year and inevitable.

For summer squash, you can cut the worst affected leaves off, leaving the stem. We make sure all the cucumbers grow up on frames so they're well off the ground and ventilated.

Foliar spraying a baking soda solution of 1 Tsp per Quart of water can help raise the pH and hold it off. Potassium bicarbonate will actually be more effective if you can get it.

Also, milk whey has an active ingredient that will attack powdery mildew. It's a byproduct of making cheese. Applied as a foliar spray as well.

In the end, you will only delay it as it's an end-of-season issue where plants slow down with less heat, are less able to defend themselves and succumb to changes into fall.

Addendum: Final harvest, November 7. Back in September, the mildew started in earnest so we clipped the worst affected leaves off one by one. Longest squash is 12 inches, enough for there for a final couple of squash dinners. Between the four plants, we couldn't give them away fast enough during the height of the season. 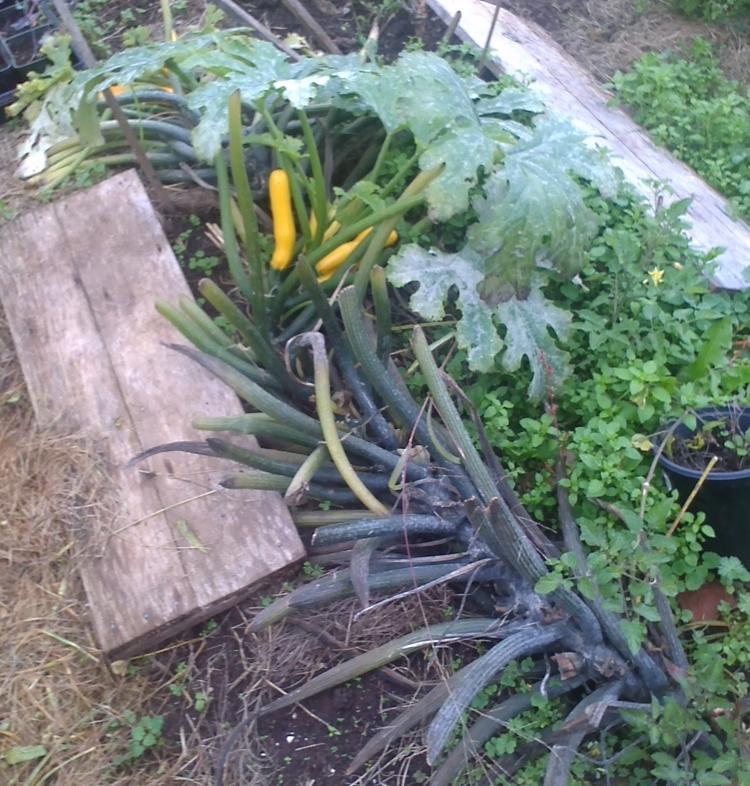 Powdery mildew is worse where sunlight is limited, as is downy mildew. You said cramming plants can increase the risk, and you've had fans on to increase aeration. Humidity would affect it. Dry leaves may make it worse, strangely. The opposite seems to be true of downy mildew, about wet leaves.

Not the answer you're looking for? Browse other questions tagged diseases fungus or ask your own question.