Is there a way to discourage blackbirds, but not other birds, from visiting my yard?

I have a couple bird feeders set up in my yard. I enjoy almost all of the birds that visit, cardinals, finches, even the occasional bluebird. But about every other day I'll walk outside to be greeted by an entire flock of blackbirds.

They'll not only chase away all of the other birds, but they'll seriously eat all the birdseed in a day. I'm afraid that once my garden is established next year, they'll continue eating through all my berries.

Is there something I could do to discourage the flocks of blackbirds from visiting my yard. Or would it be best for me to just take away the bird feeders now?

Here are what my bird feeders look like, in case that's important. 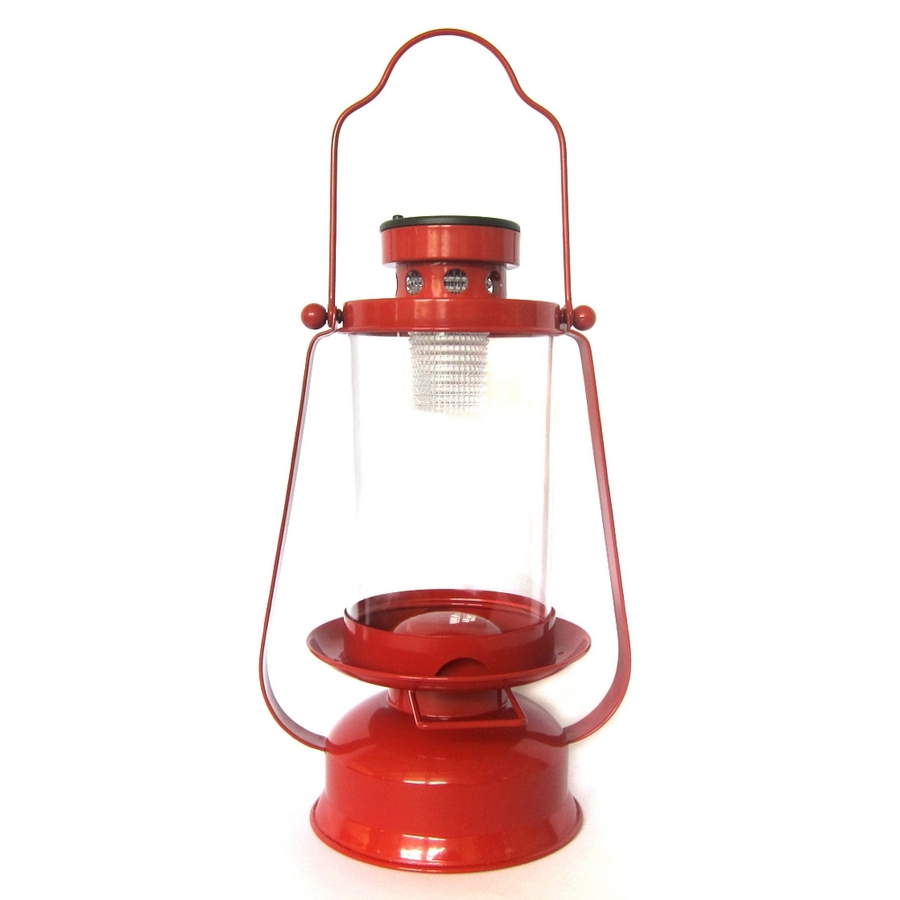 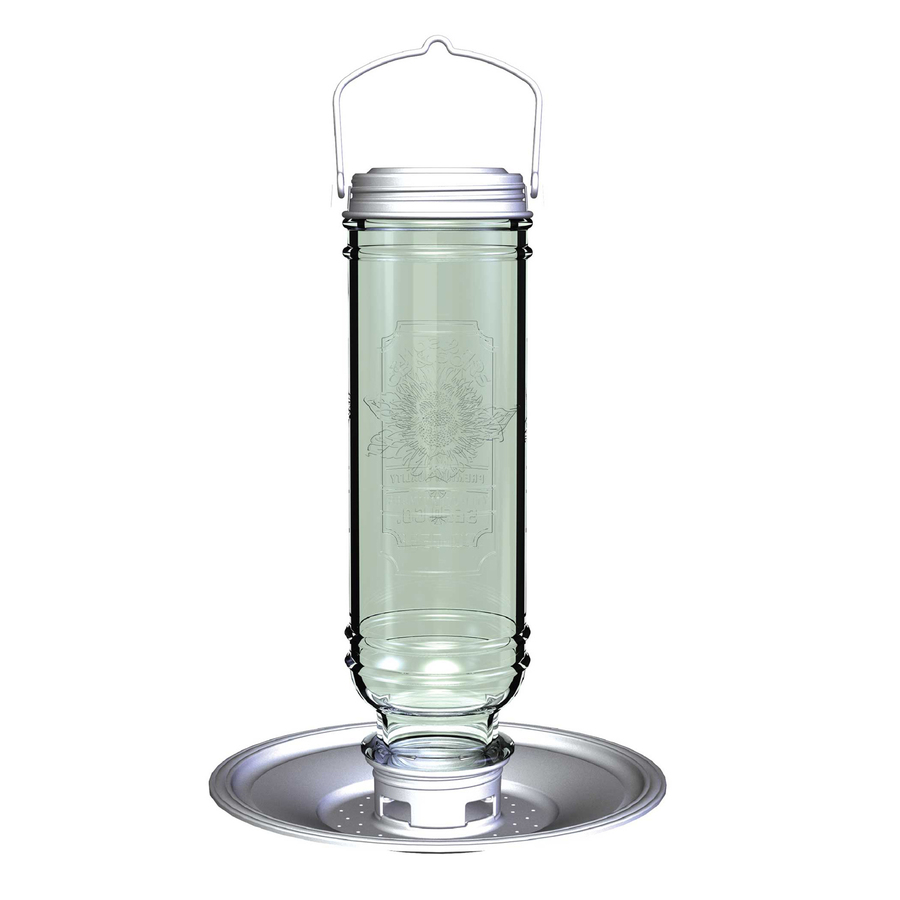 There isn't much you can do to prevent them flying into your yard. anything that keeps them away will usually scare off the birds you want, as well. About them eating your berries, that can be an issue. The thing that worked best for me was bird netting over a hoop frame. It's some work, but it looks better and is easier to get into than laying the mesh directly on the bushes. It can also help to plant some berries for the birds, like mulberries (they love them) to keep them from trying to get through the mesh. 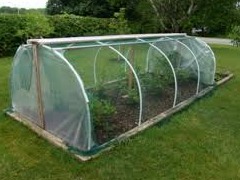 I haven't had too much success with aluminum foil pie tins (meant to wave around in the wind, making noise and reflections) or reflective bird tape.

You have some rather generic bird feeders (aren't they all), and they support a lot of range in bird sizes. You can't really stop the unwanted birds from hanging around by changing the feeder, but you can make it so they can't get anything.

Here are some styles of feeder that work:

My favorite; the big birds can't even get in, And another I've used, and can work well: 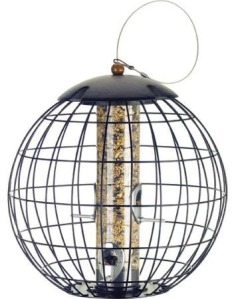 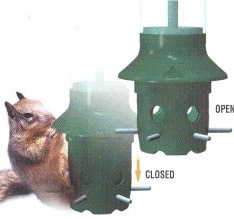 The first one is really handy, and looks cool too. It keeps birds bigger than a certain size from getting through. You can buy different shapes, sizes of cage-hole sizes. The second (I think it's the same type of thing kevinsky uses) one worked well for a while, but then got gunked up (somehow) and I had to clean it out (the part with the closing mechanism) before it would work again. That winter, there was a lot of ice and snow, and the poor thing was stuck over and over, until it cracked. Next time I get one, it's going to overwinter indoors, and I'll use something foolproof out in the ice.

Is there something I could do to discourage the flocks of blackbirds from visiting my yard. Or would it be best for me to just take away the bird feeders now?

The birds are going to fly into your yard even if you don't have feeders up, and especially if you have ripening berries. Even 'good' birds will eat those. I wouldn't try to keep them away by removing feeders, but as I stated above, using a protector over the berries.

The only thing you can do is change the container for the seed - blackbirds are essentially ground feeders, they won't, for instance, hang from a suspended nut dispenser or seed dispenser. It's likely, though, that other ground feeders that you do want won't be able to feed either. This answer assumes you mean blackbird to be the same blackbird (turdus merula) we have in the UK - if you're in the States, it's possible the term doesn't mean the same bird.

UPDATE - now you've posted pics of the feeders, it's less likely we're talking about the same bird (though not impossible) in which case, ignore this answer.

UPDATE 2: Just checked, and in the States 'blackbird' can refer to 36 different birds, seems to be a sort of catch all term for any bird with a bit of black on it, from raven through to a painted redstart.

We had this same problem and after trying multiple solutions the one that worked was to upgrade to a more expensive feeder. You can find them from various suppliers in the United States and Canada. A sample product is shown here.

They all work from the same idea: finches, goldfinches, chickadees and cardinals weigh much less than blackbirds, starlings, grackles and pigeons. By some clever engineering you can adjust the feeder so when a heavy bird sits on the perch the feeder ports close.

This has the unintended consequence of deterring the common sparrow from sitting and eating your birdseed in large flocks. Only one or two birds can feed at a time, any more and the feeder ports close.

Unless I'm mistaken, you're almost certainly wrangling with grackles. I've battled these myself in our backyard and they're quite a pain to get rid of, as the Wikipedia article notes. We had success with two different methodologies. First, a number of companies market bird seed that's specifically designed to attract songbirds, but to be unpalatable to grackles. We had some success putting this in the bird feeders, but the grackles still liked to chase other birds out of the yard, off the bird bath, etc.

I don't know how drastic you're willing to be, but the most effective thing we found was investing in an air rifle. Grackles are remarkably intelligent and, according to some recent studies, may be able to identify individual humans by face. We found that, after killing one grackle, the entire flock would avoid our yard for quite some time. We continued using their air rifle over the years, and a few things happened. 1) We only actually killed about 3 grackles in maybe a 10-year span. This wasn't a large butchering operation. 2) The grackles seemed to avoid our yard after one would be killed, especially if we left the carcass out for a while. 3) It got to the point where I could simply stick my head out a door or around the corner of the fence, and they'd all fly away.

I wanted to try one more thing before getting new bird feeders, so I looked at changing the seed instead. Reading about it, it was suggested that nyjer(thistle) seed would be attractive to finches, but not larger birds.

I filled the taller bird feeder with nothing but nyjer seed, and the lantern feeder with a mix of seeds meant for finches which contains mostly milo seeds, millet, and wheat. The nyjer seed seems to be helping in that it doesn't get knocked off the feeder and onto the ground.

I was trying to avoid sunflower seeds, because those are what I think was attracting the larger birds so much.

Depending on the type of blackbird, you may be dealing with one of the most intelligent animals on the planet.
Many Blackbirds:

Passively Scare Them Away

Not the answer you're looking for? Browse other questions tagged pest-control birds or ask your own question.