Why is my Japanese painted fern struggling?

I bought a Japanese painted fern several weeks ago. It was on the store's "reduced price" shelf, so it wasn't in perfect shape, but I figured I could try to nurse it back to health.

So far, though, it seems to be struggling. All but one of the original fronts have died off. It does have five new fronds emerging, two of which are nearly 6" long at this point, but now one of those seems to be starting to fade as well, only about a week after emerging.

The environment the plant's been living in thus far is as follows:

Here's a picture of my plant: 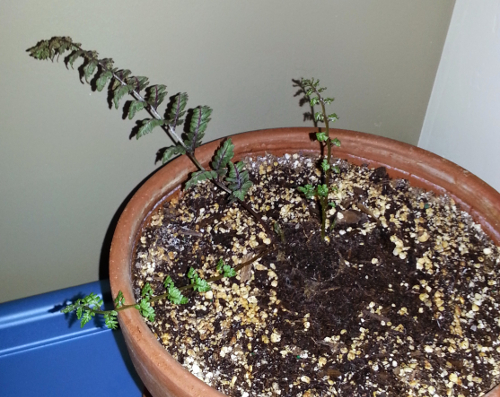 Over the past several weeks, I've tried moving the plant closer or farther away from the window, as well as watering it a bit more or less frequently, but nothing seems to change the fact that it's slowly fading away.

I have read that this type of fern is deciduous, so I wasn't too worried about the old fronds dying, but now that the new ones are having trouble as well I'm wondering what I need to change in order to make my plant thrive.

Firstly, the 50/50 peat moss perlite mix contains absolutely zero nutrients. That means the plant isn't getting the building blocks necessary to grow. Start fertilizing with your watering every other week, with a balanced fertilizer. Miracle-Gro is fine. That may not be the best mix for a fern (it isn't, actually), and I'd repot it into something more suitable, as soon as possible. Even a pre-fertilized bagged potting mix will do (not a seed-starting mix-I've had people mix them up before).

You may not be watering enough. Ferns don't like drying out. make sure the soil is thoroughly moist after each watering, and don't let it dry out completely between waterings. Only the top 1/2 inch of mix should dry out.

Humidity is another big thing for ferns. They like as much humidity as they can get. being indoors makes it even worse. Try setting the plant on a tray of pebbles, filled with water. You can also mist the plant every day.

Japanese painted ferns aren't really houseplants, and although they will live in a large pot, the best spot for them is a shady corner of a garden, enriched with plenty of organic matter. It may not be very long-lived as a houseplant. Because you're in an apartment, you'll either have to do your best indoors, or give it to someone with a garden.

All good points from J. Musser. This plant is in a pot that appears to be too large. A good rule is to move one pot size up. So if there is more than a finger width of new soil between the old root ball and the side of the pot the new soil will remain damp while the old root ball dries out.

The location is too far from the window. It should be right up against the window given that it is an outdoor plant.

Not the answer you're looking for? Browse other questions tagged diagnosis houseplants fertilizer plant-care ferns or ask your own question.