How can I keep ants off of my hummingbird feeder?

I have a hummingbird feeder hanging from the side of my carport, and I noticed today that ants had discovered it. Since it's right next to my house, I don't really want the ants learning that there's food around, and they keep drowning in the nectar which seems to be driving the hummingbirds away as I've seen less of them around since the ants discovered it.

I placed some tape around the hook that the feeder is hanging from, thinking that maybe they would stick to it then stop coming, but it's not sticky enough for them I guess because they walked right over it.

I do have another hook a couple feet away that's holding a bird feeder, so would it work if I just switched them every few weeks you think? How can I keep the ants away? 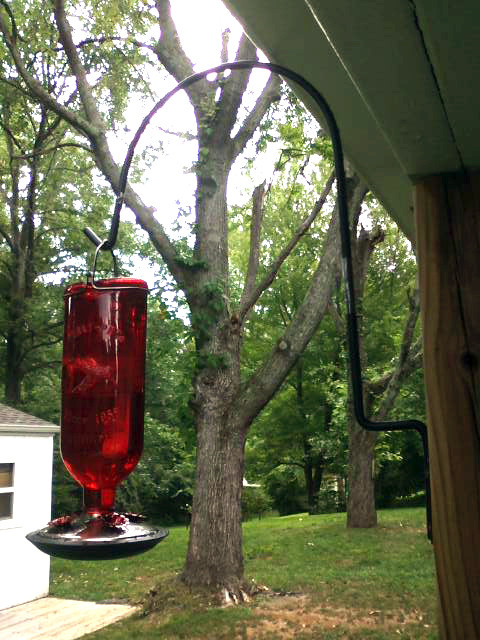 Use an ant moat.

You could build one yourself but the ones you can purchase are inexpensive and essentially consist of a cup that holds water and creates a barrier between the shepherd's hook and the hummingbird feeder. The ants won't be able to cross the barrier - at least they don't on ours.

That style - same style I have - can leak a bit and if the ants know it is there, then they're apt to try to reach it. Some other feeder types are a bit less prone to leak, but I like the look of the type we have.

Another thought - you could sprinkle some diatomaceous earth around the base of the hummingbird feeder hook and that might also discourage ants as they don't fare too well when walking through it. It's not an immediate fix and D.E. is something that you'll need to reapply after a hard rain as it washes away rather easily, but it might work.

I use D.E. sparingly around plants and directly on ant infestations that show up around the house if they're bad. It's quite effective.

There should be no oily substances near hummer feeders. In their battles they can, and do, get oils on their flight feathers, which they can't remove. Ant moats should be used with water only to deter ants.

Here is a source for this information.

Here's the trick that worked for me. Use some petroleum jelly, a cheap, easily acquired substance which is the base for many lotions and ointments, and is of course non-toxic. Ants can't walk through it, so a ring of it applied to the hummingbird feeder pole, just wider than the length of the longest ants you expect, will keep them off. Reapply whenever necessary. Also see my answer to this question on biology.se.

Not the answer you're looking for? Browse other questions tagged pest-control pests hummingbirds or ask your own question.