How to secure my orange tree

As you can see in the picture, my Orange tree is developing plenty of beautiful looking oranges. 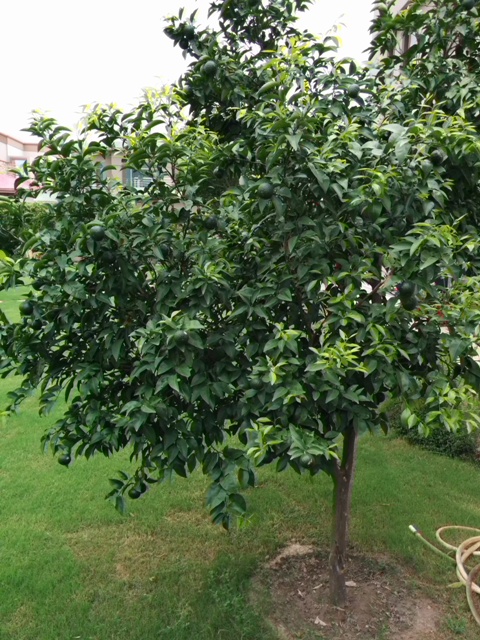 Now, I'd really like to enjoy these oranges as soon as they ripe, so I have a few questions:

This tree is in Lahore, Pakistan.

It looks like your tree is heading in the right direction, and has some great-looking fruit on it. If you keep the tree watered and fertilized, all the fruit should mature. That's the way oranges are, but they may not get huge unless you thin them.

Citrus trees respond well to lots of organic matter and minerals. Once your soil is in good shape, pests won't be an issue.

Some relevant material, from one of my long favorite books, 'the Complete Book of Composting by J. I. Rodale and staff' Mine's the seventeenth printing, from 1974.

(H. J. Kuppers tells this story of another grove:

"In years gone by it was the ambition of nearly every business and professional man in the citrus area of Florida to own a grove. True to this tradition, a former postmaster had acquired a grove of about 15 acres about 5 miles from New Smyrna Beach, Florida. He engaged the usual caretakers who follow the accepted methods from fertilization to spraying. Had this procedure been a success, he should have had a comfortable income in his declining years. His health and income failed and for about 7 years the grove stood in complete lack of care and deteriorated.

"This grove came to the attention of Mr. and Mrs. George Brenzel of Milwaukee, who had been spending their winters in New Smyrna Beach. In the spring of 1948 they bought the grove. They disked the grove lightly and sowed a cover crop before going north for the summer. In the fall this cover crop was disked in lightly.

"In the spring of 1949 they applied an organic mixture (made of citrus pulp, tobacco stems, castor pumice and peat moss) around the trees at a rate of 6 tons for the grove. This application was repeated annually and has created a healthy, dark sandy loam around each tree. In 1952 they applied 10 tons colloidal phosphate and 10 tons pulverized granite. this caused cover crops to grow where none had grown before.

"In 1953 they found greensand available in Florida and at that time they applied another 10 tons colloidal phosphate and 10 tons greensand. Mr. Brenzel reports that this treatment has brought the following results:

"At the time of my visit, May 14, 1954, Mr. Brenzel was preparing to disk in lightly a mixture of weeds and leguminous plants with the intention of sowing Hairy Indigo (Indigofera Hirsuta) for the summer leguminous cover crop to be disked in lightly next fall. These cover crops grow from 4 to 5 feet high where formerly none would grow. The soil directly under the trees is worked with hand hoes each year, so as not to injure the roots. The grove has not been sprayed since 1942. There is no sign of insects (pests) or of diseases. All trees have very dark green leaves indicating the highest degree of health and vitality.

"The fruit production of the grove has increased about 3 times the amount it produced in 1949. An analysis of a sample of the oranges in December, 1953, shows the following values over the average of Florida oranges:

Not the answer you're looking for? Browse other questions tagged fruit-trees pest-control plant-health plant-care citrus or ask your own question.