What is this dead light brown patch on my lawn, and how do I get rid of it?

I have a speckled, dry brown patch on my lawn that won't go away: 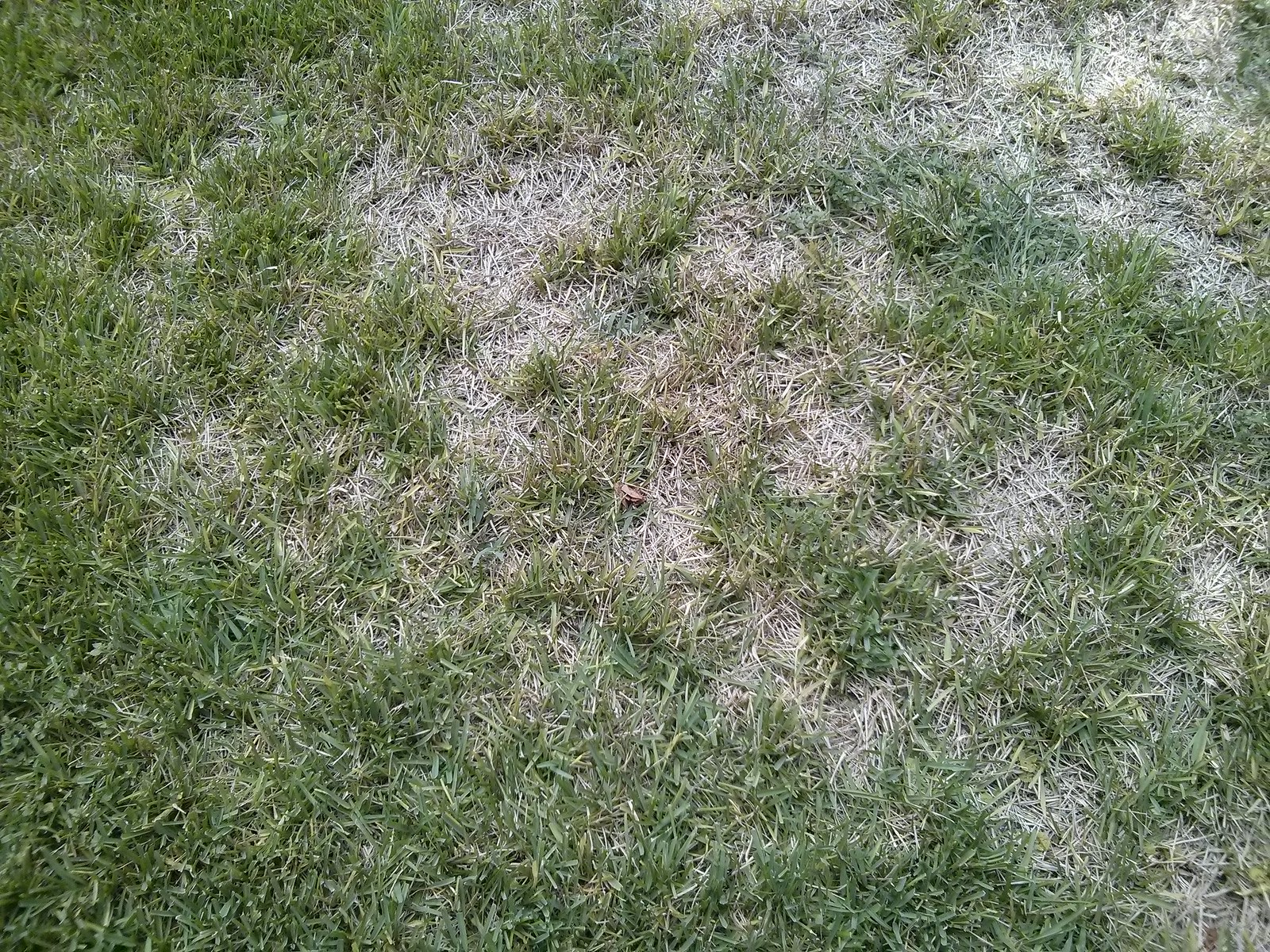 I first noticed it a month or so ago while mowing the lawn, when it was isolated to a single area of several square feet. I figured that it might be due to something random like animal urine or a spilled chemical, so I dismissed it.

The next time I mowed (three weeks later), it had grown in size and had taken on a spotted/blotchy appearance. The brown areas are dry, dead, and crumbly - I can clear out the grass and expose the soil pretty easily with my hands.

Adjacent areas of the lawn are still mostly green, but appear to be taking on the same appearance at the base of grass near the soil. Areas farther out still seem to be healthy and unaffected.

Some other info that may help:

Can anyone identify this, and recommend how to get rid of it? Please let me know if you have any questions.

A few interesting things to report.

It looks like my memory failed me - the dead grass isn't white or ashy. It's a light straw color, and of a similar tone and appearance to some clippings I left on my driveway that have since dried out. In other words, at a distance, it just looks like normal dried-out grass clippings.

But, on close inspection, I did notice that the dead blades do have some dark speckling that I didn't find on the healthy grass clippings: 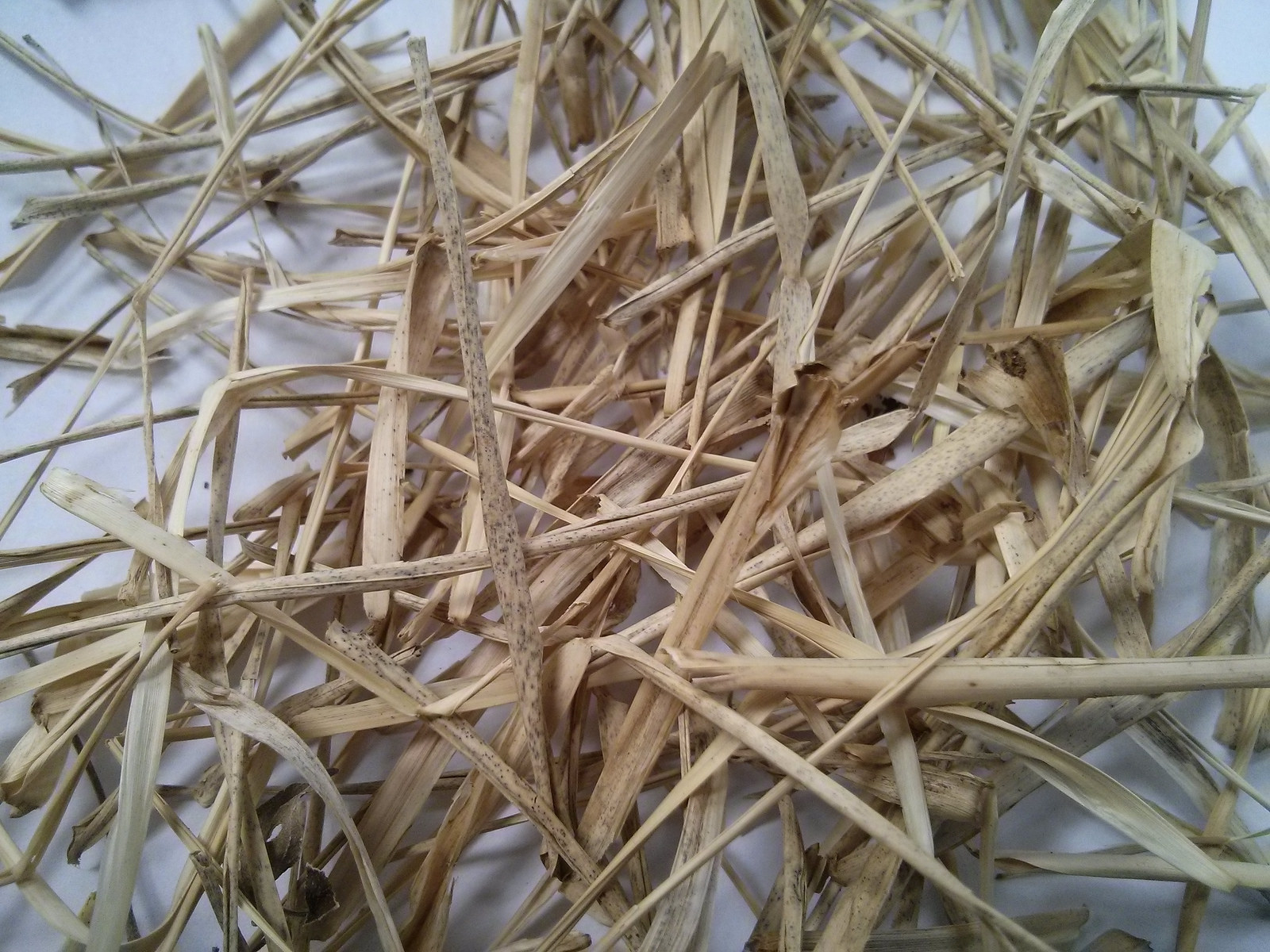 The speckles have a sort of faint graphite appearance - medium gray and slightly shiny. They're very small, and vary in density; some leaves have a few, and some leaves are completely covered.

Per @Bamboo's feedback, I looked around for insects, and I did discover numerous big-eyed bugs. I couldn't find any chinch bugs, but per the article that @Bamboo linked to, big-eyed bugs prey on chinch bugs. Maybe that explains why the patch seems to have slowed its growth? Maybe the chinch bugs came first and did their damage to the St. Augustine grass, and now the big-eyed bugs are clearing out the chinch bugs?

Per @ondoteam's feedback, I should also note that I don't have the best lawn care habits; I do mow on a pretty regular schedule, but not as frequently as I should (every 3 weeks during the growing season). I mow very high - about 3.5 to 4 inches, as I understand that improves root growth - but I'm reading now that that's about an inch too high.

I can't control the temperature or humidity, and I can probably only have a limited effect on the poor soil drainage, but it sounds like I need to:

Anything else I should do? Will the big-eyed bugs serve to limit further damage from the chinch bugs? Should I just let them roam uncontrolled? It seems likely now that the damage was due to chinch bugs, but since the damage has slowed/stopped, and I'm currently seeing only big-eyed bugs, is it safe to assume that I can bypass pesticide treatment for the chinch bugs?

Thanks for all the feedback!

At first glance, it looks like a slime mould problem, which does make the blades of grass look ashy and white, but you say it's killing the grass because you can pull it out easily, and slime mould doesn't kill grass. The other thing that springs to mind is an insect infestation in the grass, but I'm in the UK, so the only one I can find that might be causing the problem where you are is Chinch bugs, which particularly like St. Augustine lawns, and would cause the grass to die. Checking whether it's those or not is not easy, you need to get down on the grass and have a look for small insects moving about. There's another bug that's beneficial though, the 'big eyed bug' which you don't want to kill because they predate on chinch bugs, and the two can be confused - here's a link I found at Discover Entomology at Texas A&M that might be useful to help you determine whether it's those or not:

There's only one picture there of an affected lawn, and it does look a similar colour to your dying patches. I'm much better at gardening than I am at technology, so I'm hoping someone will turn that address into a proper link - I just Googled 'insect infestation causing dead, ashy patches on St. Augustine grass in Texas' and that's how I found the information.

UPDATED ANSWER: I would have expected you to find some chinch bugs if they really were the problem - in that link above, if you read all of it, it does tell you to do something with an old coffee can to test whether it's chinch bugs or not, and I'd certainly do it, because it may not be chinch after all. The other alternative possible problem is white grub - the link below does mention them, though isn't hugely informative as to how to detect them other than giving symptoms, which do fit with your problem.

Looks like the best time to treat for white grub is July, so you may have missed the window of opportunity, but have a good read and see what you think. Recommendations for treatments included in the links.

Otherwise, Google white grub on St. Augustine grass, Texas - there are other links. One thing you will note is that, with either of these problems, dead thatch in the grass isn't good, because it encourages these problems and prevents any treatments you use being so effective. Which means you will need to do more lawn maintenance than you've been doing, in particular dethatching or scarifying, which I think is called 'vertical mowing' in your part of the world.

Considering that the patches are gray, the issue of high temperatures and high humidity, the clay soil and what look like black dots on dead leaves, it may be "barley powdery mildew" - Blumeria graminis (DC.) Speer (=Erysiphe graminis).

As far as possible, try to avoid the above points. For example: try to scarify more often (it will improve drainage and aeration), cut the grass at the proper height, try to avoid lingering shadows along the day (by prunning shrubs around the affected area) and finally use fungicides preventively.

I think you should contact a professional to do the job of replacing the grass. However, althought I am not an expert on grass, I think it is common sense to apply fugincides to kill the fungus and then replace all affected parts. Unfortunately I do not know fungicides sold in your country... but maybe some community member can.

P.S.: Too much English at one time. If you do not understand something, let me know and I will try to write better. Sorry.

You can spray with green food coloring. That will get rid of it right away. About $6 a bottle (16floz) at walmart. Dilute it about 2fl oz per gallon of water and then spray away. If you are picky about the color, you can also mix green to yellow to match your grass color.

3
What is this growing in my lawn?
6
Please identify and give suggestions on how to get rid of it
7
How can I really get rid of henbit?
4
How do I get rid of phragmites in my lawn?
7
Recommendations on fixing my lawn
1
How to cure brown lawn. Grass stalks look too long
5
How should I treat brown patches in my St. Augustine grass lawn?
5
Mysterious brown patch in our lawn
2
Can I rake and/or mow my lawn after seeding?
6
How/When to Remove Dead Weeds and Reseed Lawn?