What is causing the rotting/brown spots on my plum fruit?

I inherited a plum tree in my garden. I haven't yet been able to get a healthy looking plum from it. All the plums that turn to a ripe purple colour seem to have the following problem - 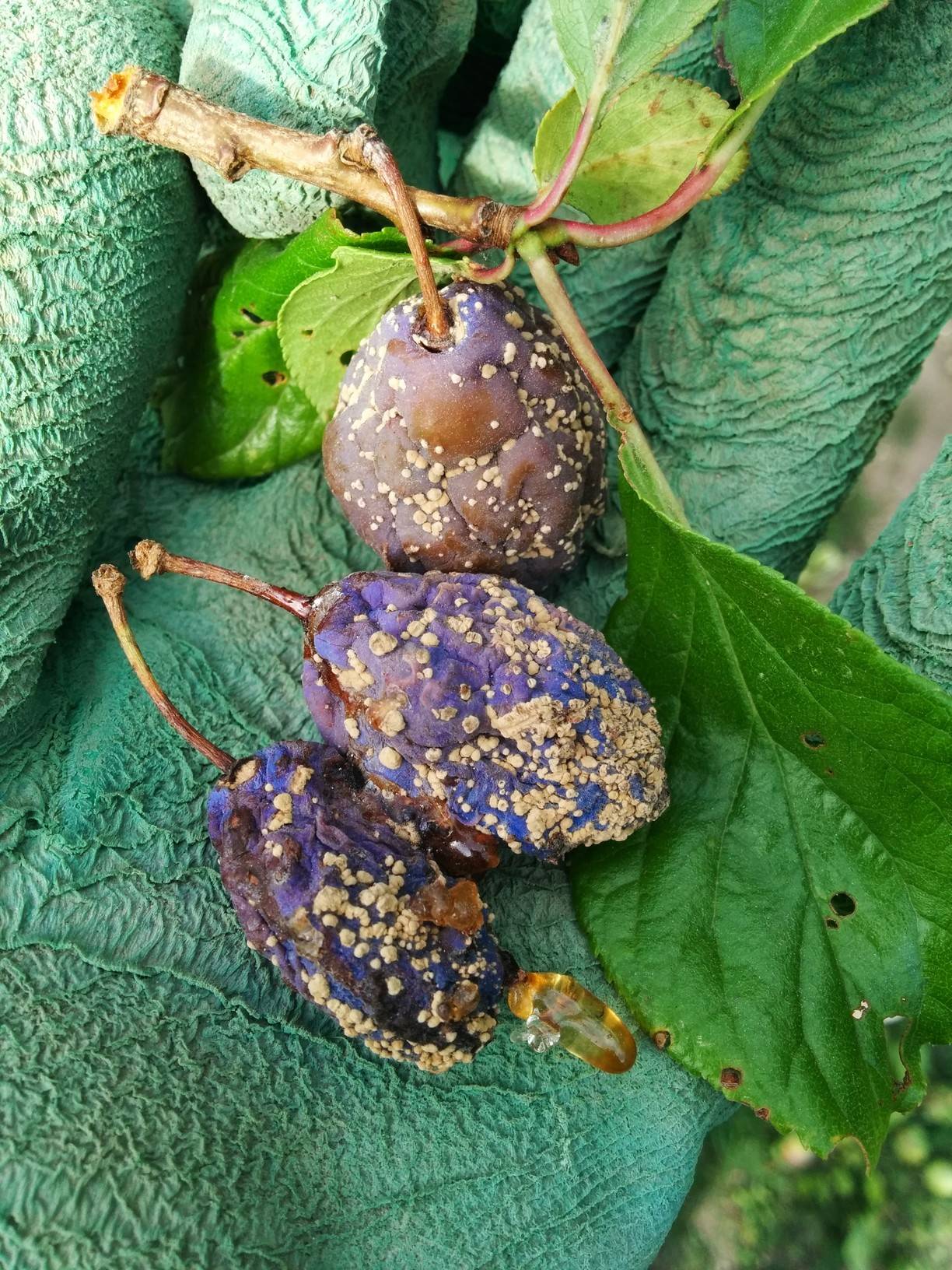 Can anyone identify the problem and what I need to do to prevent it? I have just gone and removed all the plums left on the tree that are showing these symptoms. I've still got a good crop left and would love to get some healthy ones.

It looks like Monilinia laxa but it can be M. fructicola or M. fructigena (all from fungi kingdom).

I'm not familiar with the common english names of diseases... but I have been reading about "brown rot" quoted by Bamboo in her answer and basically there are two variants: european (M. laxa) and american (M. fructicola).

Bamboo also comments the following in her answer:

This is commonly known as brown rot in the UK, and is pretty common - sets in usually as a secondary infection following damage to the fruits, usually from plum moth or birds pecking at them.

That makes sense because M. laxa affects mostly the fruits with damaged tissues but it is not a must because it can also be established on flowers. Either way, you can be sure that the powdery circles are caused by the fungus.

As you're not in the States, you won't have a 'phytosanitary seller'.

This is commonly known as brown rot in the UK, and is pretty common - sets in usually as a secondary infection following damage to the fruits, usually from plum moth or birds pecking at them. Select one of the less affected fruits, cut it in half and see if you can find a sort of tunnel with bits of brown excrement, and if you're really lucky, you'll see a little pink larvae in there, towards the centre. If you do find that, its plum moth, and you need to use a pheromone trap for next year, and spray at certain times. The RHS has a page on plum moth which tells you when to spray and what with.

Other causes of brown rot are too many fruits all touching one another in damp weather, but unless you're in a wet region, this year, that won't be the cause because of the hot weather.

UPDATE IN RESPONSE TO COMMENTS:

No criticism of your language intended ondoteam, I thought you were speaking about some local authority to contact - I understand now you are talking about using a fungicidal treatment/spray.

Duncan Morris; to reiterate, this infection is common, and there is no treatment once it's taken hold. To avoid this problem in future years, establish what has caused the original damage to the fruits to allow this secondary infection to set in - as this summer has been hot and dry, the cause won't be damp weather, which may, in some years, cause this trouble, but rarely. My money's on Plum Moth.

UPDATED ANSWER 6/8/14 - You've confirmed you think Plum Moth is an issue - you'll need to take action next year or you'll end up with no plums again. Get a pheremone trap appropriate for Plum Moth, hang it in the tree at the indicated time (see packaging). You'll also need to spray (Bayer Sprayday greenfly Killer or Westland Plant Rescue Fruit and Veg Bugkiller) beginning to end of June I think, check instructions on the pack. The pheremone trap might be enough to protect most of the fruits if you have only one plum tree.

UPDATE 2 15th August: I appear to have been downvoted on this answer, but given the answer is entirely accurate, I'm somewhat puzzled as to why, so will whoever marked it down please give an explanation?

Not the answer you're looking for? Browse other questions tagged diagnosis fruit-trees diseases plums or ask your own question.

3
How to remedy die-off of lower and middle branches on my plum tree?
3
Lack of Blossom and Fruit on my Plum Tree!
4
What is causing the brown-black spots on my apricots?
6
Is the fruit from this plum blossom tree edible?
5
What is this powder-like substance on the leaves of my kiwi tree?
1
Undersized fruit
3
Chrysanthemum flowers and buds turning brown and dying, leaves wilting and getting brown spots
2
How do I prune the broken branches of my plum tree?
1
Help me diagnose my tomato plant's stem problem!