What is this pest attacking and killing a douglas fir?

My parents had two 40 year-old douglas firs in their garden in Berlin-area in Germany. One has died in a process of 3 years and has now been removed.

It all started with some resin bleedings in 6 meters high 3 years ago. Then the needles got brown. This year the tree did not recover at all.

While removing the tree we found an insect and we are wondering whether they are the cause and what can be done to prevent the other tree from dying the same way (it has just started to bleed as well).

Unfortunately we did not take a picture and so we can only a drawing to help identification. The insect measures 15mm long and 2mm large. It was all black and connected to its head it had a kind of shovel. Which might have been used to dig into the tree and making the wholes which lead to the bleeding. 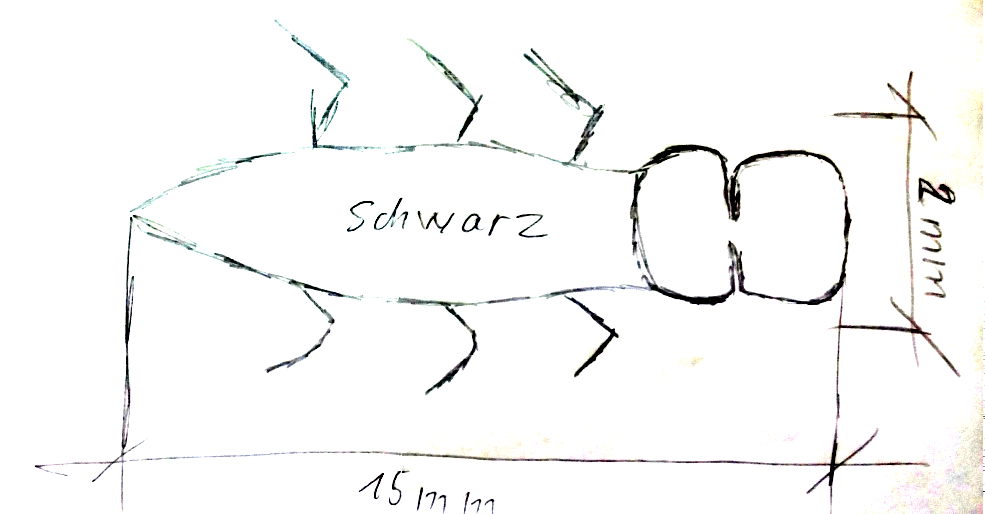 "schwarz" means black, whether it had 6 or more legs we are not sure anymore. Two of them had been kept in a box for about 4 week without dying.

EDIT: I got the information that the tree stopped growing already 5 years ago (no new top growth has been observed since, whereas the neighbor tree continued normally (up to now).

No black sap has been observed coming out of the wounds. Only clear resin.

Here's a picture of the sad moment (click for a full-size version), right is the still active tree now showing the same symptoms apart from the growing stop. 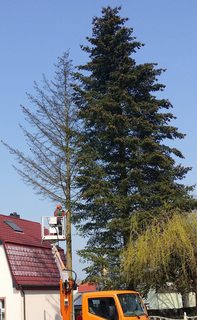 While the drawing you have uploaded doesn't match any Douglas Fir specific beetles I've been able to locate online, the damage you described sounds very much exactly like the kind of damage a bark beetle infestation would produce. Beetles that attack trees generally lay eggs just under the bark, and their larvae will then eat their way through the living part of the tree, the cambium, until the damage becomes so great that the tree can no longer transport enough sap to all of its branches - and then the tree begins to die. The dying may take a few seasons to finalize.

As the beetles do their damage under the bark, woodpeckers of various types will bore holes through the bark covering to get to the larvae under it, which is a large part of their natural diet. The holes you were seeing may have been from the beetles, but if they were lined up in rows part the way up the tree trunk, they were more likely made by woodpeckers.

I wish I could give you more information, but without actual pictures it is more difficult to pinpoint the exact cause of your parent's tree's death. Plus, the types of bark beetles that are prevalent in Germany are likely different than those which attack Douglas Fir here in the states. Even so, the damage is the same as is the result.

Here is a link to the type of beetle that most often infests Doug Fir here.

It's likely that the beetle/s you saw are unrelated to the death of these Douglas firs - it's far more likely to be phytophthera ramorum infection, currently a spreading and big problem in Europe and the UK. As yet, I am not aware of any serious borer beetles, particularly not on softwood trees like fir, in Europe - Douglas Fir is susceptible to P. ramorum, there are many so affected in the UK, though the commonest victim so far is Japanese Larch. The symptoms you describe fit with phytophthera infection - lesions appear which exude or weep, often black exudate, sometimes clear and resinous in conifers, needles brown and die, branches die back as the infection spreads. Withered shoot tips occur, though if the infection started high up, you may not have noticed those.

I have no idea whether P. ramorum is notifiable in Germany, it is in the UK, but the second affected tree should be removed as soon as possible and the wood disposed of safely to try to prevent further spread. There may be local advice about disposal if it is P. ramorum - as a point of interest, Larch forests have been and currently are being ripped out in various parts of the UK (and I believe other countries) to try to contain the spread, along with large areas of wild growing rhododendron, a host plant for phytophthera.

UPDATED ANSWER: Plant death will occur, but the time that takes is variable - depends on size and susceptibility, and the fact that it may have been present for longer than the owner of a plant has realised, particularly on large trees. Once a diagnosis has been made, removal of plants is, or should be, prompt, without waiting for them to die on their own. Inspection of interior wood from a branch you've removed often reveals dark streaking.

UPDATE 2: I don't suppose you still have any wood left from the previous tree, if it's been removed, which you could inspect for signs of infection. The pattern of its dying would certainly hint at phytophthera of some description (there's more than one variety), but if you want certainty, the inspection by and advice of a qualified tree surgeon or arboriculturalist should be sought. Unless you have some local service who might be interested - in the UK, that would be the Forestry Commission Pathology Disease Diagnosis Service, or directly to DEFRA. I imagine you must have some equivalent there.

The other possibility is simple canker which has set in for some reason - either way, the end result is the same, but its quite important to establish whether or not it's a case of phytophthera of some sort. If its P. ramorum, other shrubs in your parents' garden may well be at risk, and it's still a quarantine pathogen (I just checked). Interestingly, I discover it's now becoming a major problem in the USA, where it's more difficult to establish the cause because there, they have various borer beetles that we don't have in Europe (yet, at least) which may cause similar symptoms.

7
What is the name of this tree and is it dangerous for our daughter?
12
What is this bonsai tree with serrated elliptic leaves and why has it lost all its leaves?
0
What causes tomato leaves to wilt and die from the bottom up?
8
What is this white foam under my tree?
3
What kind of worm is this which lives in the soil of my potted mango tree?
5
What is this big caterpillar in my yard?
3
What is this ornamental conifer and is it dying?
2
What is eating/removing young fruit from my lemon and orange trees?
3
What tree is this and are the brown leaves a sign of poor health?