Why is my new Acer tree dying?

I recently bought a small red Acer and moved it into a more permanent pot. It's about 2 1/2 feet tall and since I've moved it, the leaves have started to brown and shrivel like a dead leaf would in autumn. The pot is about 1 foot in diameter and 2 feet tall, and has a drainage hole in the bottom about 1 1/2 inch in diameter.

I live in the UK and it's been very warm the last few weeks but we've also had a few downpours. I've watered it a few times but not every night. It's in direct sun from about 10 am to 2 pm.

When I re-potted it I put some large stones in the bottom of the pot for drainage, some sods of grass from tidying the lawn, then some spare soil from the garden, then some compost.

Why is this happening, what have I done wrong and what can I do to fix it?

The following pictures are of the tree in its pot; some shriveled leaves; and also the trunk and lower branches, which look sort of dead, although that part may have been like that originally.

Click on any picture to see a close-up view. 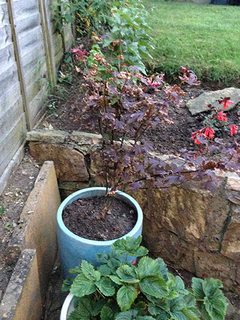 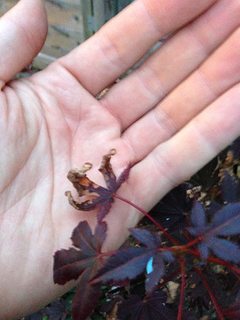 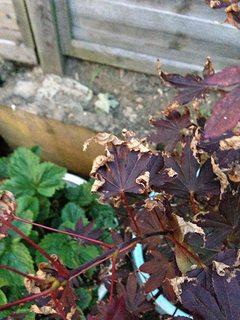 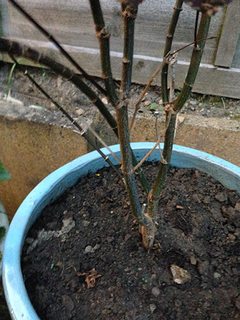 I moved the tree out of the wind and re-potted in potting compost. All the "burned" leaves have fallen off and new buds seem to be appearing. 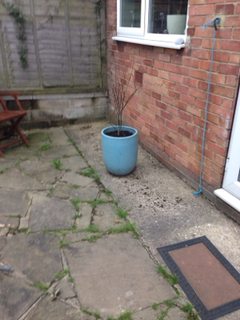 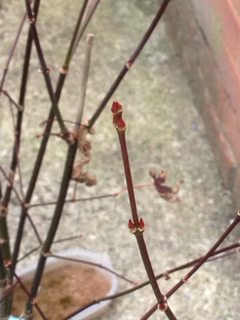 First, your Acer is not dying, it's just very unhappy. This is a common problem on Acer palmatum varieties here in the UK- usually, the cause is wind, that is, you've placed the plant in a spot which isn't sheltered enough. They hate windy areas, and they don't like hot midday sun in high summer either. What they do like is dappled sunlight, or morning sun, or afternoon sun, just not roasting hot sun in the middle of the day, but a sheltered, non windy spot is critical.

I agree with other's comments about drainage - you may have been watering more to obviate the shrivelled leaves, thinking drought was causing that; that would explain why the soil in the pot looks very damp, but if you have no drainage holes in your pot, it's critical that you make some, or change the pot. If there's a single hole in the bottom, and you've crocked it, that's fine as it is. Water copiously when you see or feel the compost on the top is slightly dry to the touch - but don't wait till it's shrunken from the sides of the pot. It will take a while for your tree to put out roots well into the compost to pick up moisture, so in the meantime, it's a small rootball surrounded by soil which shouldn't be allowed to dry out too much.

A word about compost though - Acer palmatum varieties do not like limey or alkaline growing mediums, and you don't say what you used to pot it up. It doesn't look like there's a compost problem, I'm 100% sure this is a 'not sheltered enough' problem, but if you used something that was alkaline, change the compost. Use ericaceous - they don't really need high acid, but at least you'll know it's not alkaline, and it won't do any harm.

Yep, that is a Japanese Maple, Acer palmatum

Here's how to plant/grow a Japanese maple tree in a pot:

Your tree has a few issues. First of all, you should repot into a proper potting medium as soon as possible. The soil isn't drying out properly between waterings, and the tree is showing signs of this (it can cause drying around leaf edges, while the plant remains unwilted). Also, the tree has been planted too deep for healthy growth. When you replant, make sure you can see the root flare.

Because of the time of year, you should keep the plant out of full sun for the first couple weeks after replanting. This will keep the tree from over-drying while it regrows some roots.

Your tree looks completely recoverable, it only needs a little proper care.

If you have any questions, or wish for me to expand on something or cover another topic, please let me know.

If your pot does not have drainage holes, then it's possible the soil in your pot has become waterlogged and "sour." Adding rocks and sod to the bottom is not enough to provide consistent and proper drainage. Using compost and garden soil in planting pots is also less than optimal, as the structure tends to become either soggy or rock-hard in such a confined area.

The first thing I'd do, is tip the pot on its side and see if water runs out. If it does, water-logging is likely to be your problem. If no water runs out, then you should check the condition of the soil within the pot to see if it has become case-hardened, which prevents water from soaking in as it should. Case hardening often happens when you use garden soil in pots, when the soil ball becomes so hardened and impermeable that water applied to the top of it runs around the root ball instead of soaking in where the roots can get to it.

In any case, at some point you are going to need to either drill holes in your pot, or find another pot of a suitable size that already has them drilled (if your current pot does not have adequate drainage holes already) and then re-pot your tree using some kind of commercial potting mix. If the tree seems to be in dire straits, I'd do it sooner rather than later, and if it was waterlogged, you will also need to trim off any roots that appear to have rotted. If it had a case-hardened soil root ball, then you will need to gently wash the hardened garden soil off of the roots and then replant the tree - again, in a pot with holes using commercial potting mix. In either instance, water the transplanted tree well, and then let it dry out a bit before watering it again. The top inch or so of the soil should feel dry to the touch. Also, keep the tree in a semi-shaded area for a few weeks, to give the roots time to reconnect with the soil and re-establish proper capillary action (the ability to draw water from the spaces within the soil particles into the root system.)

Just to be clear - this is not the best time to be transplanting a small potted tree as a "bare root" and there is a significant risk that the tree may not survive being transplanted this late in the season, but if it's already well on the road to dying, you may have no choice but to risk it. Good luck.

Keep in mind that adding rocks to the bottom of a pot does not improve drainage. Instead, it simply reduces the volume of soil available to the roots, and raises the perched water table. If your objective is to reduce soil volume that's fine, otherwise it could increase the chance of root rot. I know that goes against conventional wisdom, but there's a great writeup of it here: http://forums2.gardenweb.com/forums/load/contain/msg0918361520140.html

This is a common problem caused by direct sunlight or excessive temperatures. I have a Japanese Maple in my front yard and it gets direct sunlight in the morning. It also goes through similar trauma every summer. I have another plant that is on the side of the house that is shaded and does not get much direct sunlight and it is doing fine.

Not the answer you're looking for? Browse other questions tagged trees diagnosis tree-care japanese-maple or ask your own question.

5
Why are my tomato plant seedlings dying?
5
Why is my Peace lily dying?
4
Peace lily dying. Please help!
2
Care of and shaping of an Acer Palmatum where many branches seem dead
0
Should I let new Ash trees grow up after emerald ash borer attack
3
Is my areca plant dying or dead?
4
Dragon tree plant dying?
1
Have we killed our new acer palmatum Taylor?