Why are my pumpkins dying? Is it the heat?

I'm getting plenty of flowers, and about half of them produce a tiny little pumpkin.

However, after only a couple of days, the pumpkins begin to turn black and shrivel up.

It is 104-degrees during the day with medium humidity.

I have been providing water.

Although my sample size may be a tad small, it seems that those in the shade are slightly more likely to survive.

Should I cover the young pumpkins to give them a chance?

I have 8 larger pumpkins in the patch, but I haven't had any new ones take hold a while. 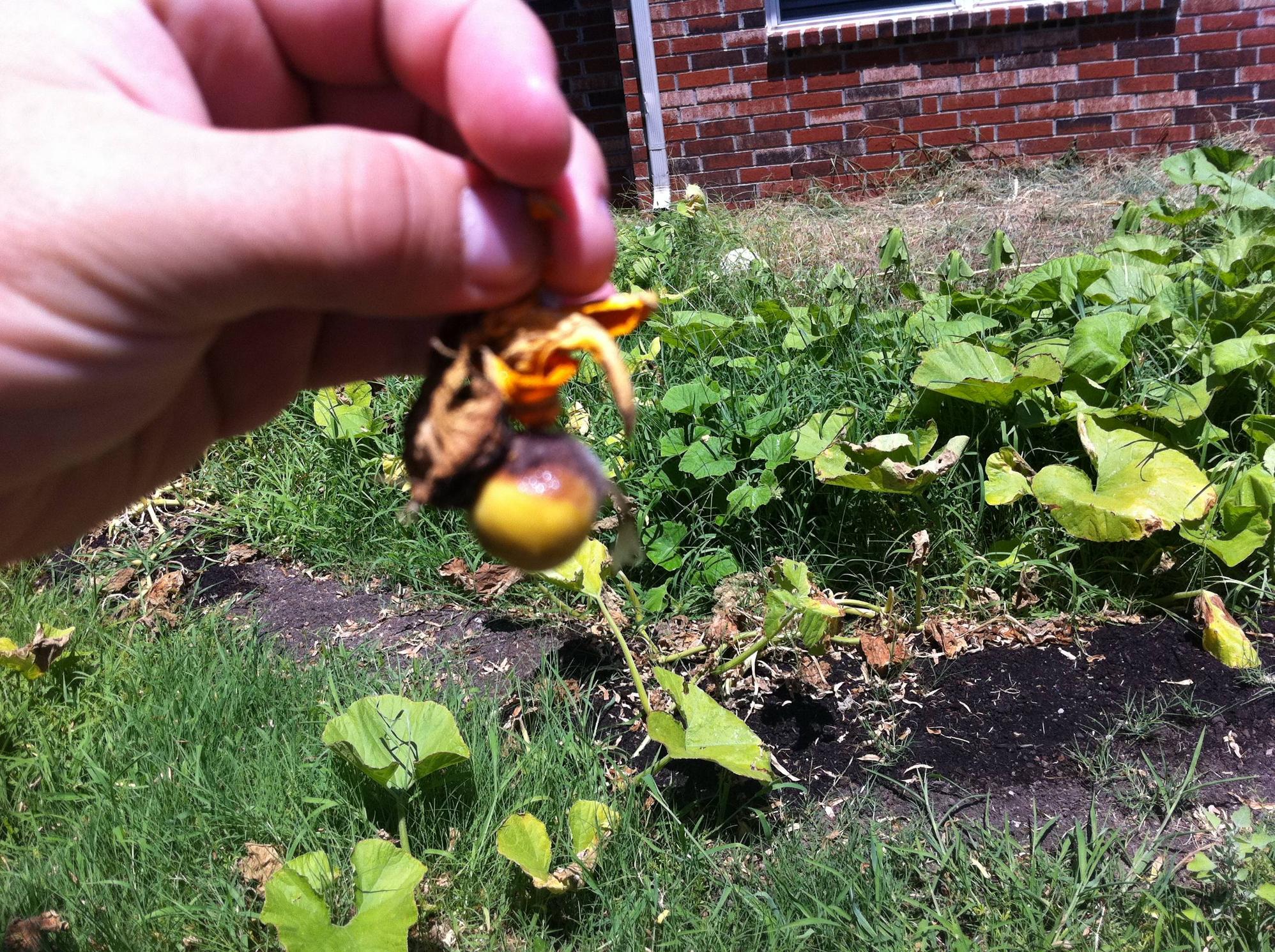 With 104°F temperatures and especially if your pumpkins are in full sun, that is the most likely cause of what you're seeing.

Also did you allow the patch to dry out during that extremely hot period?

If yes, that would also have had an affect on what you are now seeing.

I think you might find the first 10 minutes or so of the below podcast worth a listen:

Judging from the latest photos you have posted, which show that the entire plant has yellowed, and the leaves have wilted, I suspect that the problem could be caused by the fungus Fusarium Crown Rot, which has not yet spread to your other pumpkins, as outbreaks tend to be localized; the symptoms develop as follows:

Apparently, damage to the fruit varies widely,depending on the particular pathogen involved. It is worth examining the stems carefully, since a black and rotting area, at or just below the soil line, is characteristic of this disease, and together with the above symptoms, would definitely suggest FCR.

I hope this tentative diagnosis prove wrong, as its spores can survive in the soil for 2-3 years and, unfortunately, there is no way of controlling it other than by a four-year rotation.

You will find most of this information about FCR, together with details of similar diseases, here and here

Not the answer you're looking for? Browse other questions tagged diagnosis pumpkins or ask your own question.

15
Why are my courgettes enormous, and my pumpkins puny?
11
How many squares should I use for small pumpkins and watermelon?
6
Why do my pumpkins develop rotting black dots after harvesting?
6
Pumpkins in Florida
9
How do you tell when pumpkins are ready to harvest?
8
What is this dead light brown patch on my lawn, and how do I get rid of it?
6
Why are my pumpkins only growing small, then dying?
7
Rats! There are rats destroying my pumpkins!
1
(NW Indiana) Yellow pumpkin stems and leaves