Can I thin grapes/vines in July?

I have bought a garden in Austria (Central Europe) which has some grape vines (I don't know the exact kind). The previous owner told me they harvested 20 kilograms of grapes last summer. Currently (early July) the vines are bearing a good handful of grapes -- still developing of course, less than 0,8cm each -- but a friend told me that the grapes would not be good unless I remove some of the fruit, so that the remaining fruit will be better (sweeter, juicier). I found this similar question which says to prune in early spring. Since I didn't prune then, my question is:

Can I thin the fruits in July? If so, how? If not, will the grapes be any good this year?

Considerations of how the vine would grow next year aren't relevant because I will be building a house here next year and the vine will have to be sacrificed. This year, I'd rather have few but enjoyable grapes than buckets full of bad ones, so I would not mind pruning ruthlessly, to get any good ones this year. I'm just hoping it's not too late for that? 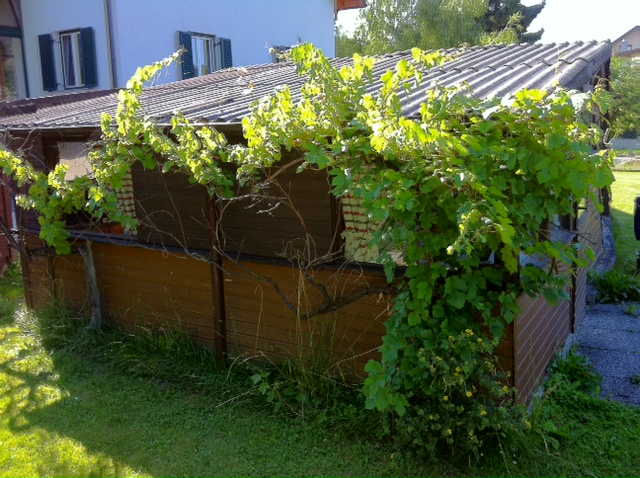 There is apparently only one vine growing; another one or two seem dead.

Don't prune unless the vine is dormant.

What your friend was probably meaning was to snap off some of the grape clusters (fruit) so that the remaining grapes will be sweeter. This only works if the grape plant produces more fruit than it can supply with adequate sugar. Also, (common sense) removing fruit after it is well developed will have little impact on the sweetness of other fruit since the sugar has already been invested.

If there are only a few hand-fulls of grapes on the vine, I would probably leave the plant entirely alone.

However, if there are more than one (significant) cluster on a shoot and the clusters aren't developed very well, I might remove all except one (or two, if the shoot is large and/or the clusters are small) clusters of grapes from that shoot. (assuming they aren't significantly developed already)

In Florida my grapes are in their third year and have finally developed some fruit worth keeping. I am not sure where you live, but unless you are living in a very warm climate I would say that you should probably not worry about pruning. It is probably too late to start new fruit. Just nurture the ones that you have and maybe you can have a good last harvest.

25
Does fruit on fruit trees need to be thinned?
17
How should a long neglected grape-vine be pruned?

31
How should I prune my vine tomatoes?
2
How do I prune long neglected grape vines?
11
What's a good method for pruning an apple tree?
3
What size, and how far apart, should support posts for a trellis tunnel be?
2
When do whiteflies typically emerge?
5
Starting over pepper plants
5
Multi-Trunk Muscadine Grapes
3
How long will leafhoppers stay after grapes are removed?