Does it matter if I cull the flower or fruit for higher fruit quality?

I have a tropical Century Guava that will soon be putting out dozens of flowers. I would like the resulting fruit to be bigger, so I need to do some culling. Will the final fruit quality differ if I cull the flowers versus culling the small fruit that they become? I am hesitant to jump the gun and cull the flowers because I don't know how many will be pollinated and I don't want to abort potentially good fruit. If waiting to see their potential will sacrifice quality, then I may be forced to do that. 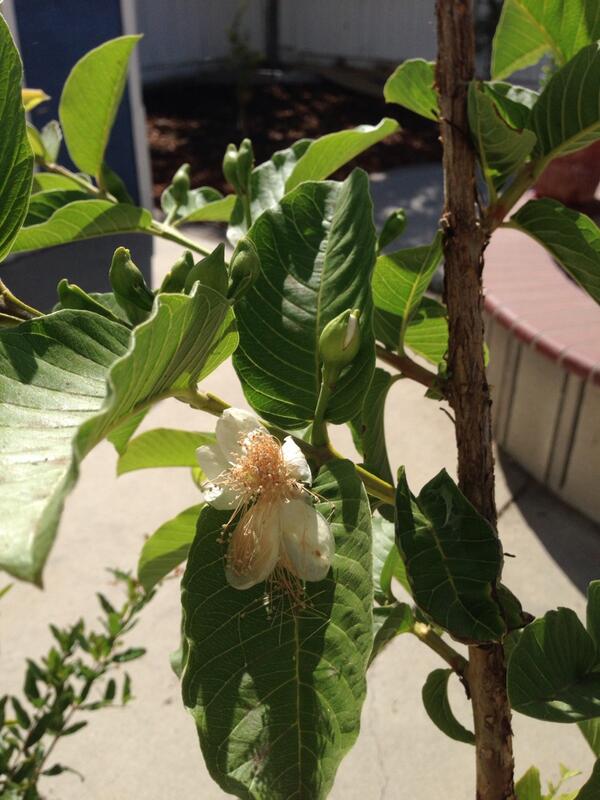 By the way, this is the same guava tree that almost died on me. It dropped 80% of all its leaves in the spring. It regrew new branches and leaves quite vigorously these past months. Now it's creating flower buds like crazy.

You want to cull after fruit set for the reason you mentioned, pollination, and also because some of the fruits in a cluster will not be quite as strong as others. You won't be able to tell which flowers will set, and which ones are the highest quality, until after pollination.

Most Guava varieties are self pollinating, but you may get a bigger harvest with pollination between two varieties. Guavas are generally pollinated by bees, but for off season fruit, when the bees aren't active, you have to use hand-pollination.

Some large orchards thin flower rather than fruit, because pollination is very high. For a person with only a few plants, pollination rates are lower, and fruit thinning gives better results.

From here, a very interesting study showing the affects of thinning on guava production:

50% Fruit thinning as described below will dramatically increase yield:

Fruit thinning: Total number of fruits per plant in each replication was counted after fruit set. Out of these according to treatment fruits were thinned randomly by hand when the average weight of individual fruit was 15- 20 g.

Shoot bending: The branches which were healthy and disease free lateral shoots were selected for shoot bending with care. Shoot bending was done in such a way that the bent branch did not broken down after bending. Shoots were bent at its antigrowth (at 90° angle) with the help of a piece of rope. Before shoot bending 3-5 leaves were kept at the upper portion of the branch to continue its photosynthesis and respiration process and rest leaves were removed off.

So here's a new 'rule of thumb' for the year of the guava: if you can touch two guavas with your thumb, they're too close (I favour the metric thumb).

From Sunset The Pacific Monthly:

While the fruits are usually about one to one and a half inches in diameter, they may be much improved in size by proper cultivation and careful thinning, as the guava is extremely productive and sets an enormous quantity of fruit. Indeed, it is claimed to exceed in productiveness almost any known fruit-tree.

Here is another good resource that involves thinning guava fruit.

Not the answer you're looking for? Browse other questions tagged flowering fruits guavas or ask your own question.

5
Why are the lower leaves of my tropical Guava yellowing and dropping?

8
How long does it take a mock-orange bush to flower?
9
Should I cull June-bearing strawberries for fall bearing?
17
Why does my lime tree drop its fruit early?
7
How old does English ivy (Hedera helix var.) have to be in order to flower?
2
Can tiny fruit bearing trees be grown in flower pots?
4
Does wrapping fruit increase its temperature?
6
Is the fruit from this plum blossom tree edible?
4
Should my healthy, flower-covered eggplant be producing fruit yet?
3
What is the name of this fruit?
1
Does removing the pistil from an Amaryllis flower extend the life of the bloom?