Can the bananas of this variety be eaten?

I recently purchased this banana tree in a flower pot. I've attached two photos with its label. Do you know if the bananas of this variety can be eaten? (Does the "\" icon over the fork and knife mean that they can't be eaten?)

Moreover, should I have it in full sun, or is it OK if it's in shade? Finally, how often should it be watered? 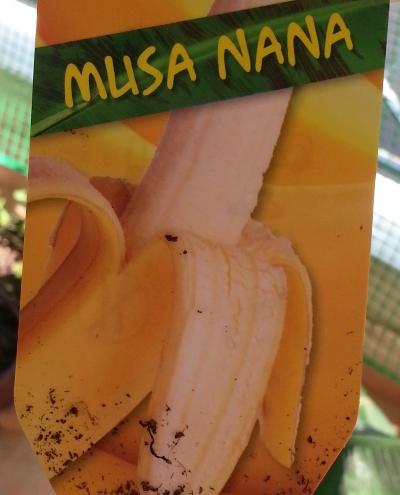 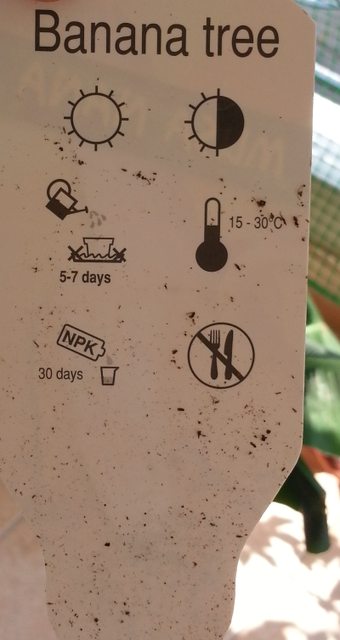 Well, your questions are answered by the icons you posted a picture of.

The crossed out knife-and-fork icon suggests that you cannot eat it. (The circle with the diagonal line mimics the 'prohibited' sign, which can also be found in traffic signs or 'smoking prohibited' stickers.)

The Musa Nana (dwarf banana) is a often used as a synonym for Musa Acuminata. It should be edible (at least not poisonous), but some sources say it contains many seeds, so maybe that's why they regard it as inedible. It could also be that they've treated it with pesticides in such a way that the fruits of this specific specimen should not be eaten. I wouldn't know why else they put that icon up there, because under normal circumstances you could eat these fruits. Or maybe the icon applies to the plant in general, rather than the fruits.

About the sunlight, the plant can (as the icons also suggest) be grown in full sunlight or half-shadow and it should be watered every 5 to 7 days. Bananas use quite a lot of water, so be sure to check if they are not too dry. You should fertize them once a month, even in winters, and in summer you might even want to fertilize more often.

Not the answer you're looking for? Browse other questions tagged plant-care banana or ask your own question.

11
Are bananas male/female and which ones will contain seed?
9
What is the best way to over-winter bananas?
4
What is the best way to kill a banana shoot but not the entire plant?
5
What can I do to make a Dwarf Cavendish banana plant thrive in my apartment?
5
Are my bananas safe to eat after being flooded by Harvey?
5
Is this some kind of banana