Is there a traditional method/style for pruning a Chocolate Silk tree?

I have a containerized Chocolate Silk (a.k.a. Summer Chocolate) tree that is two years old (i.e. it was planted in its present container from a branchless and rootless stalk two years ago).

It has grown robustly each year, but the foliage seems unbalanced in the sense that there aren't many leaves or branches near the trunk and it keeps growing out but not adding interior growth. 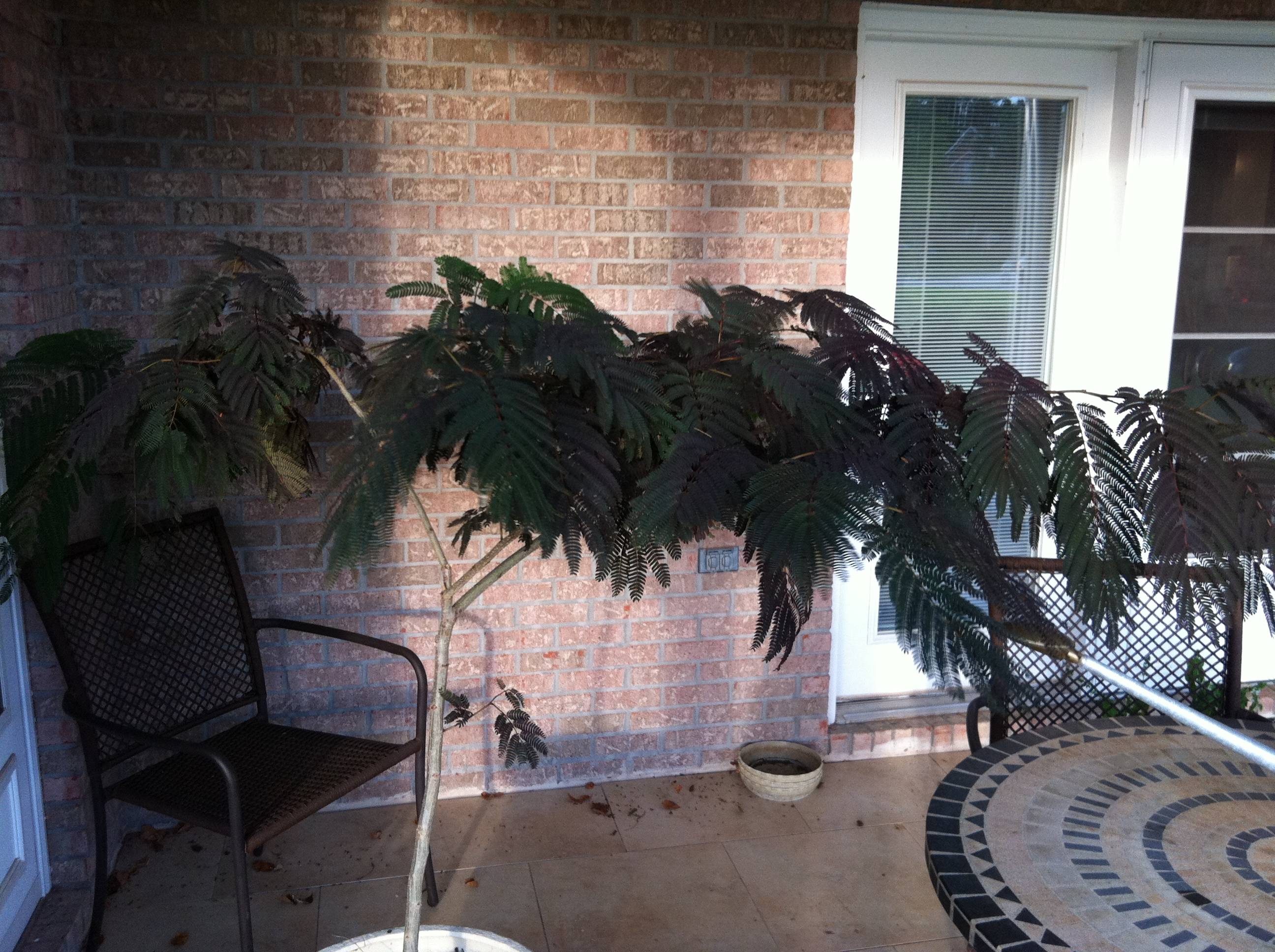 Is there a traditional look or style for Chocolate silk trees, and if so how should I prune to achieve it? (My Google image searches mostly resulted in close-up pictures of the leaves; most of the tree-scale pictures were of obviously un-pruned plants or copies of a single picture showing tight foliage.

Is there a certain time of year when I should prune (i.e. it's early July, is it too late)?

More generally, do overall guidelines for pruning trees (such as prune when dormant) apply to this varietal?

This looked very familiar as either a "mimosa tree" or a guanacaste, so I looked it up. Yes "silk tree" is another name for "mimosa tree" (guanacaste, the national tree of Costa Rica is tropical and unrelated but looks similar).

This tree is one of the Albizia species (there are 150!) of the Mimosoidae sub-family, so they are distant relatives to the low lying mimosa plants that include "Sensitive Plants". This also explains their similarity in general shape of compound leaf and fuzzy pink flowers (or mine has pink ones!).

Yours looks about right and more typical of the ones I see in Texas, than the pictures I could find online(!). This is the best I could find: 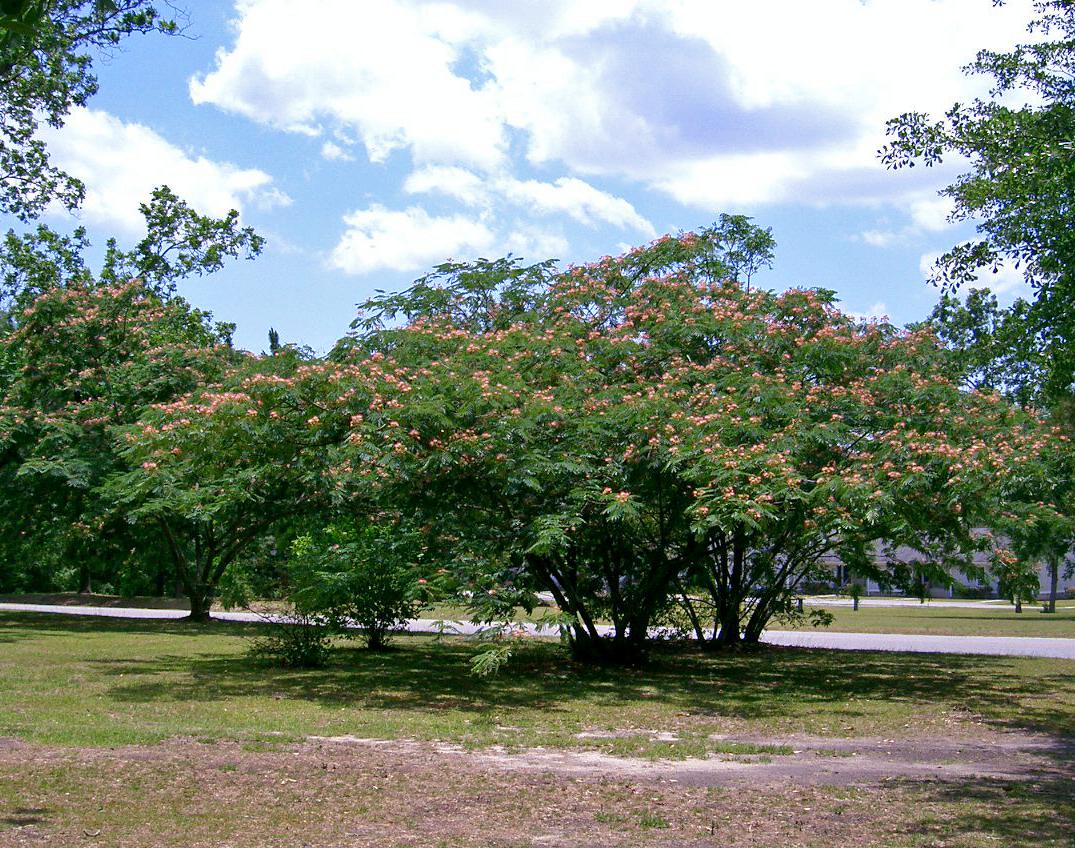 This might not be the exact same species but the branches look similar. I think the fact we're seeing a stand with multiple trunks complicates things. As I say yours looks much like how I see them. The branches are quite springy and grow up and at an angle and level out. A full set of leaves will weigh them down so they'll often arc downwards (yours aren't that long yet), and the general look is of horizontal leaf "canopies". Might be tempting as leaf shade but it makes a poor shade tree - the leaf cover is thin and as the whole tree is springy it blows easily.

These are non-native to North America and considered invasive in some parts. I actually managed to grow my tree from seedlings that start on their own in back-fill when the city were working on out street, so with less of a winter, I can see how they could become a pest. (I'll try to get a picture but it might take some time).

Mimosa Trees / Silk Trees look nice but they are vulnerable to physical damage. Limbs break easily. I read somewhere that a typical lifespan is about 15-20 years.

Robust growth sounds right. As is the non-lower-trunk growth. The leaves grow on the branches. My tree is older and it does have a little bit of growth further down - but they are like that "twig" you have (plus one example of mower damage that led to a low level branch sprouting - not recommended!). Let that grow, it will be a new branch. I think you're doing fine. I do note you have more growth on the right - probably due to the sun. I have the same problem with mine growing to one side but this is because an elm is impinging (a long story, but suffice to say the elm will be a decent size when the mimosa dies and I would prefer the large long-lived elm - so I'm letting everything be for now).

Pruning: I've never worried about the time although I tend to prune in spring so by default that is when it gets clipped. I only prune it to stop it getting in the way (eg. growing across our back alley). After a quick look at the URL you posted, yes I cut the branches in that manner. I find it also results in a neater looking branch/trunk.

Yours is about the size mine first put flowers out. It was even in a pot at the time - which is apparently unusual. General advice is to plant it out for flowers. Seeds should be viable. My Mum took some of ours and they germinated.

I find it can survive short drought conditions and at its worse will drop its leaves but with a good soaking will quickly put out new ones. If you are starting to see large numbers of leaves going yellow and dropping then it is probably too dry. 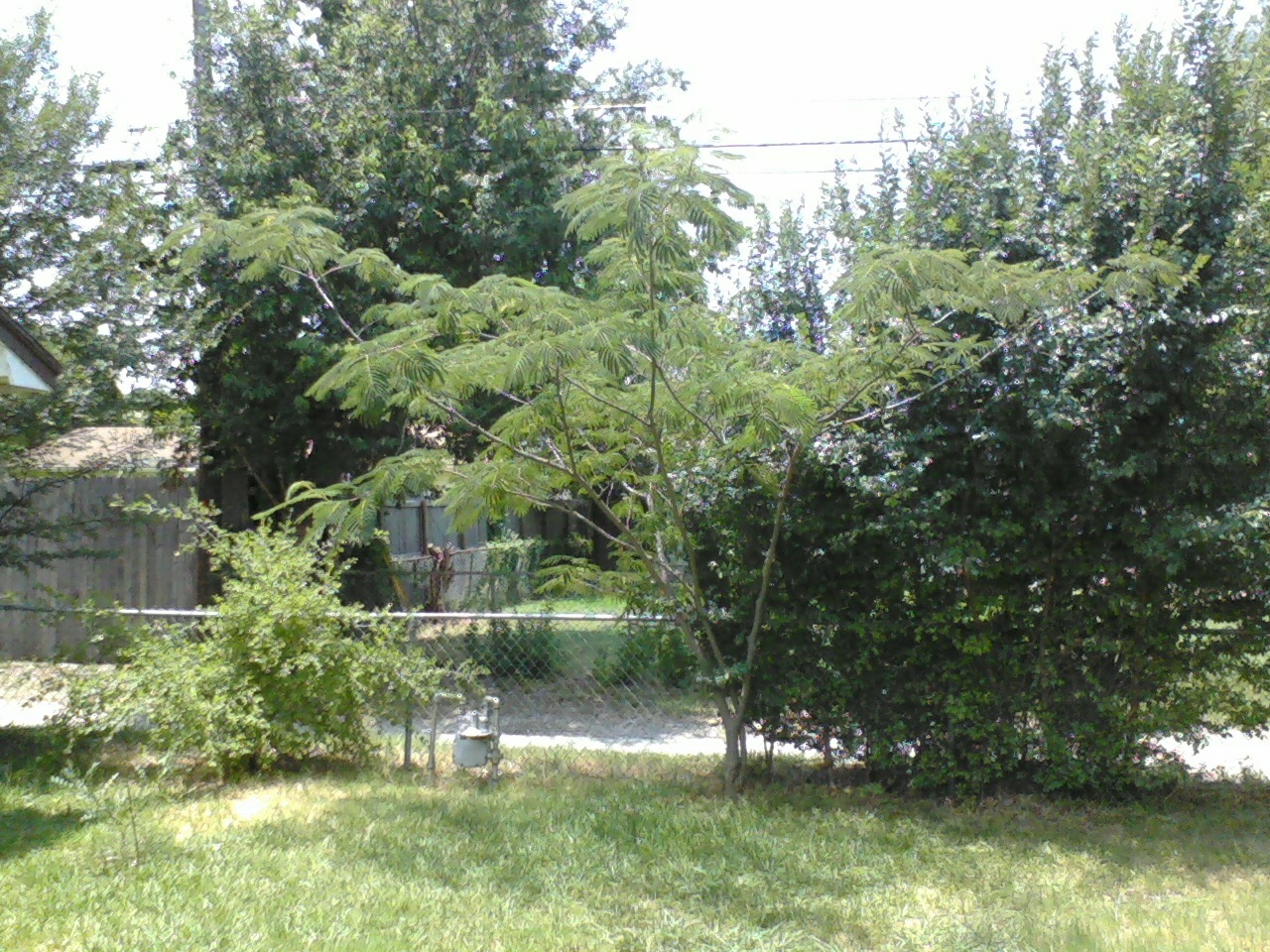 Sorry for the poor quality - it was taken with a phone not long after midday! You can see the general shape though. And the flat canopy-like areas from groups of compound leaves. Some of the more central branches go closer to vertical, but others curve outwards to horizontal. The lower part has three "trunks": The first (main) trunk has a Y shape with a branch about 1ft up: This was due to squirrel damage on the growing tip when the seedling was about 1yr old. The third branch is smaller and from further down. This is from strimmer/weedwacker damage - I think there's a good argument to remove it, but it does add some depth to the foliage above.

The lower left branch is bowing down a bit. There's probably an argument to trim it, but I probably won't.

You can also see the elm encroaching on the right. This is from a stump that started growing. The original was a grand tree that gave us a lot of shade. I didn't need much persuading to let it grow back again, even if it comes back as more of a coppice.