What insects killed this red cabbage?

Watering the lettuces, I spotted a Red Cabbage head leaning sideways on the ground.

On close inspection, here's what I saw: 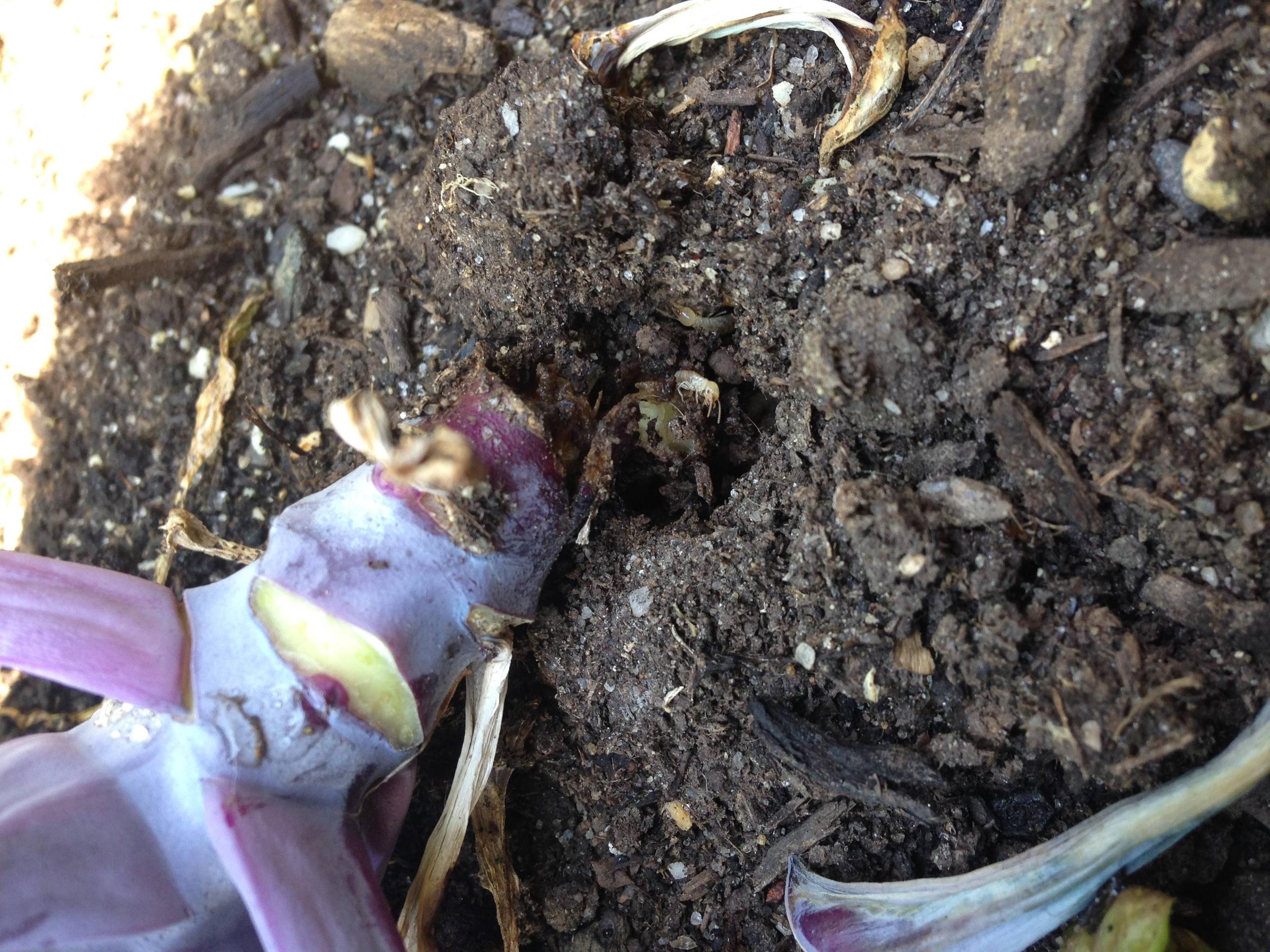 Three little worm-like bugs having a feast of the bottom of the stalk of this head of red cabbage. 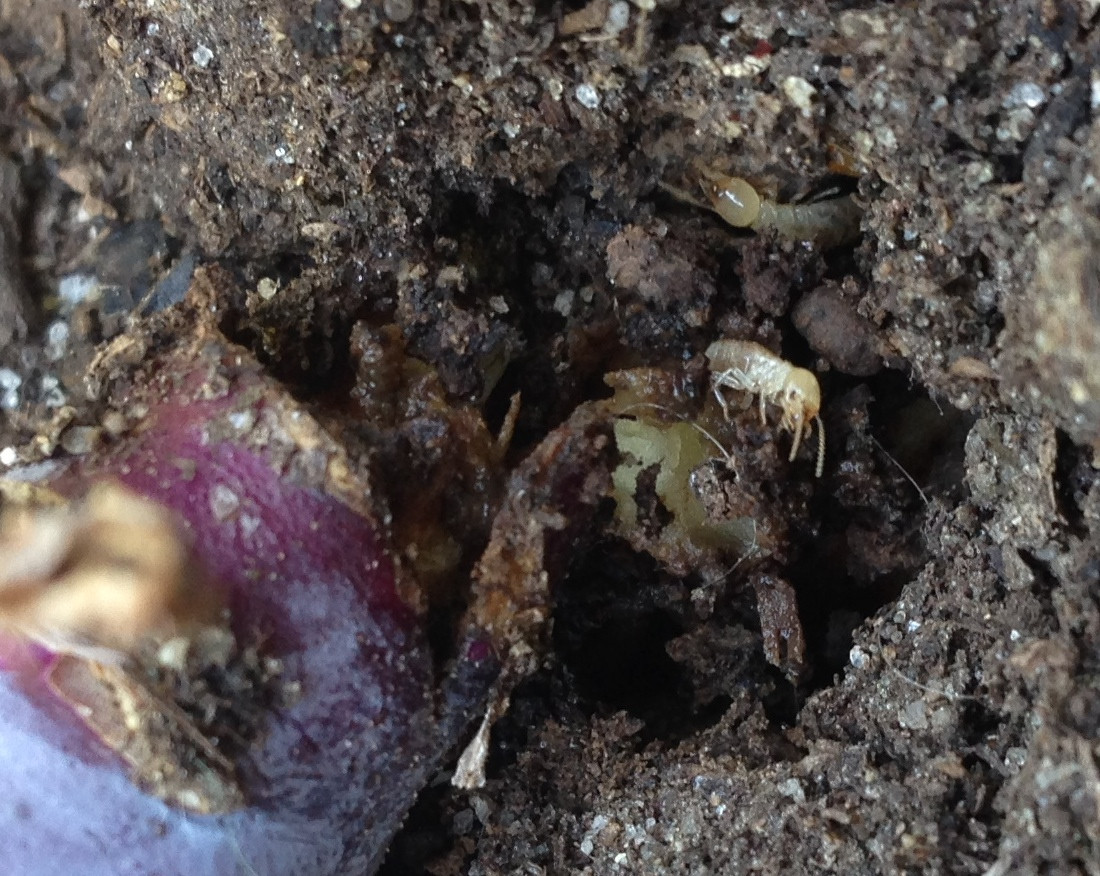 Their posse was crushed by hand. The cabbage will be cooked tonight.

Neighboring Mesclun, Red Sail, Collards, Arugula and the other three Red Cabbages are all basically well. Photographed on a warm sunny day just before being watered: 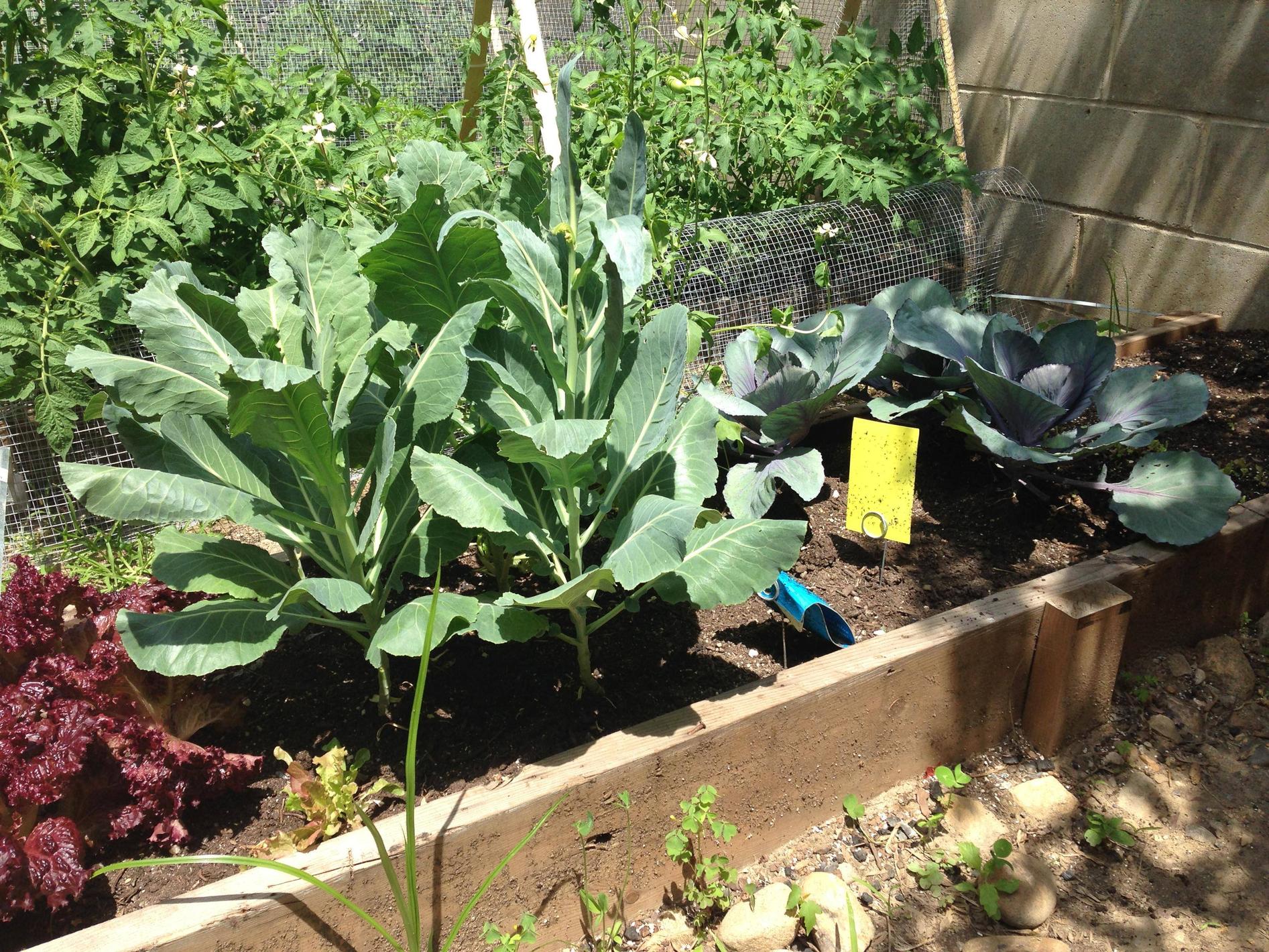 These are growing in an above-ground planter built a couple of months ago in the backyard of a 3-family apartment building in Brooklyn, NY.

There is heavy duty landscaping cloth under the planter. Worth noting, the wood I built the planters from was reclaimed, though I inspected each board thoroughly and (I believe) they were bug-free.

But.. see that yellow card? It's a sticky trap to kill hatching larvae, placed there one month ago when A swiss chard planted in that exact location suddenly wilted!!

As Stormy points out, next season it would be advantageous for the lettuces overall to be dispersed throughout other locations, or with companion species besides cole crops.

I'll update this post as the cabbage root excavation continues.

Fiasco Labs has ID'd the bugs as termites. What an outright terrifying little species those are. Confirmed watching spine-chilling YouTube videos, the motion of their "feasting" is very distinct.

A few weeks ago, Nematodes were added to all of the soil in the various planters. Scanmask was used, and I did my best to not over- or under- populate my garden based on the instructions. We hope beneficial Nematodes put the hurt on all nefarious bugs!

Having learned the hard way I've seen this many times. I think this is the cabbage maggot, hatched from eggs that a fly deposited at the bottom of your cabbage. Although the guys in your picture look a little older and are getting ready to become adult flies.

All of your cole crops such as cabbage, broccoli, Brussels sprouts, cauliflower, Chinese cabbage, radishes, rutabaga, turnips, kohlrabi and kale are in danger of this fly. The maggots simply eat the roots until they fly away.

Next year, do not plant any of this family in the same place. As soon as you plant seed or seedlings, early in the spring, cover them in row cloth. Allow to bunch up to allow growing room and seal the sides and ends under your soil. When the plants get big enough and start producing, you can uncover them. The time for flies to lay their eggs is pretty much over. Even though it seems easier to plant all of the cole crops together so they can be covered try to space them in different places in your garden.

This year, applying beneficial nematodes might save some of your plants. Maybe. The roots may be so gone that all you'll be able to do is harvest and make sauerkraut. Beneficial nematodes: Steinernema carpocapsai and Heterorhabditis bacteriophora are the two to look for. They swim through the soil and enter through the insect's mouth or other natural orifice. Once there, they release a bacterium that lives in their gut.The bacteria kills the insect within 2 - 4 days. The nematode continues to eat the insect from the inside out.

Totally harmless for you. Even so, read the label, 5X! You'll be buying live, infective larvae suspended in a storage medium of moist peat, vermiculite or gel. You'll have to be refrigerating the package until you can apply. Good luck!

Note that I agree with Stormy on this one, Cabbage Maggots likely are what ate the stem. 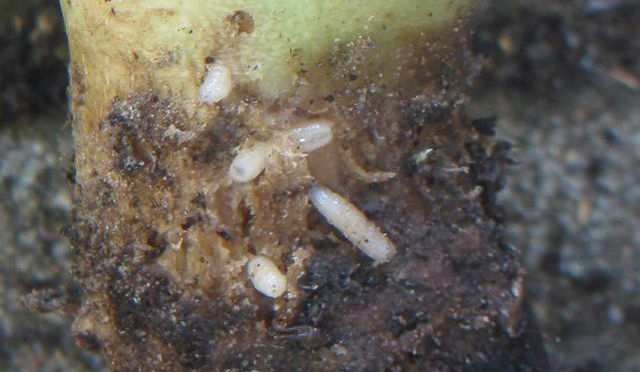 I wasn't being facetious with the comment on your question though, as what is shown has a well defined head and legs, so it's not a grub. Section from your picture: 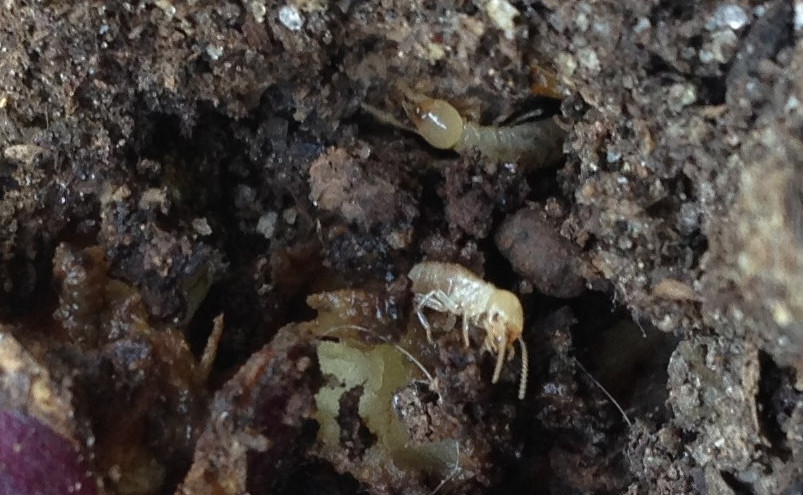 Makes me identify these as common Subterranian Termites which are also living in the planter. Note the well defined head, feelers, jaws and legs, which the grubs do not have. They are probably in there after woody and dead plant matter after the culprits pupated. 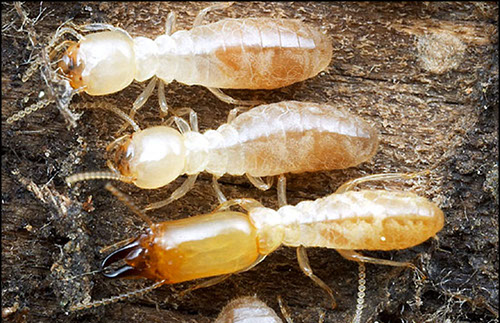 Not the answer you're looking for? Browse other questions tagged pest-control plant-health soil insects pests or ask your own question.

8
Why is my Swiss chard suddenly wilting?