Is this flowering vine diseased?

I'm not sure what the name of this vine is, but about a week ago the flowers started to brown around the edges and then fall off completely. A couple of days ago the leaves began wilting.

I did fertilize the lawn about a week ago and I suppose some of it could have gotten on the vine, but I can't imagine it would be enough to do this... but maybe?

Any idea what is going on? I've attached a few pictures. 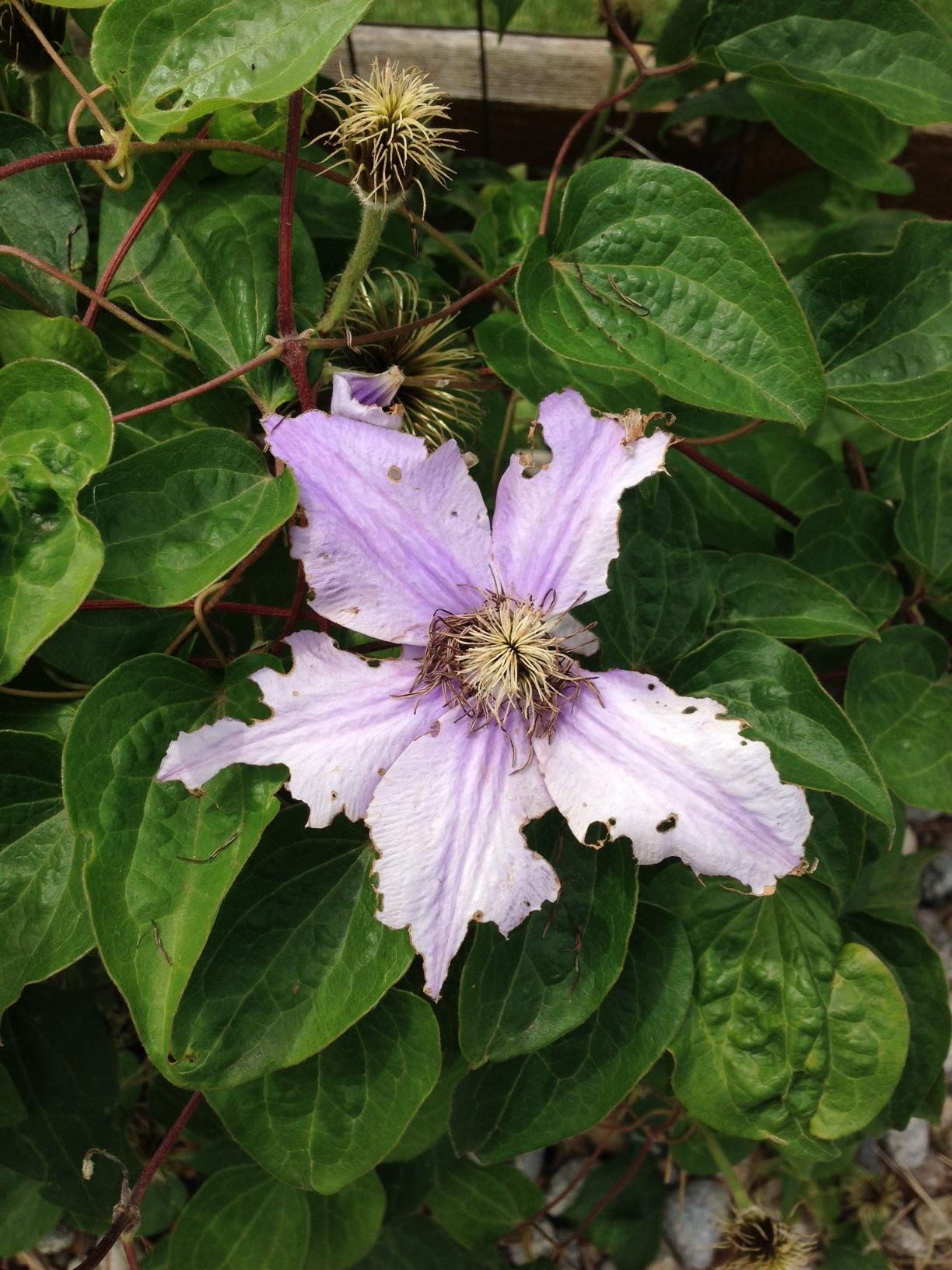 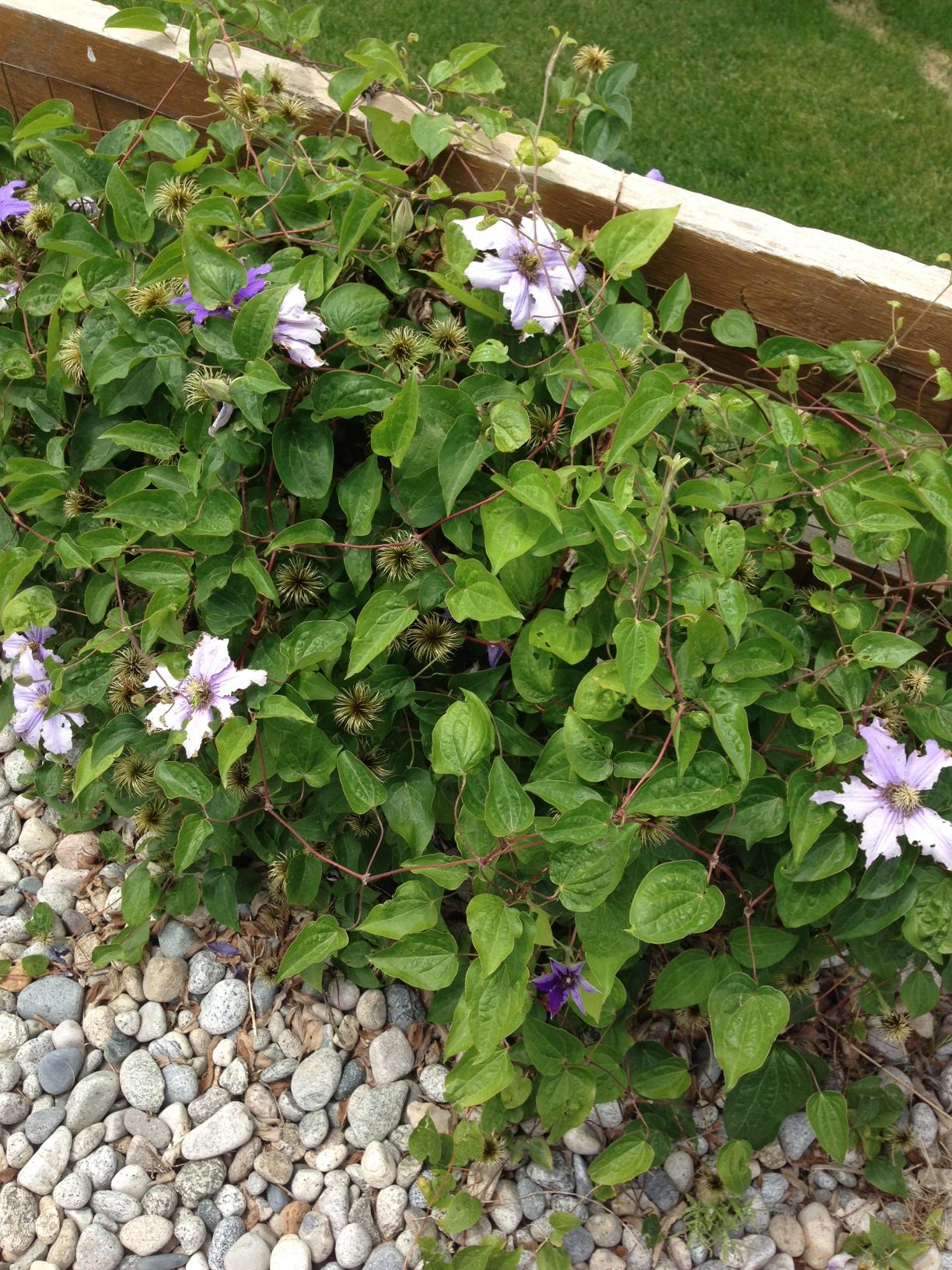 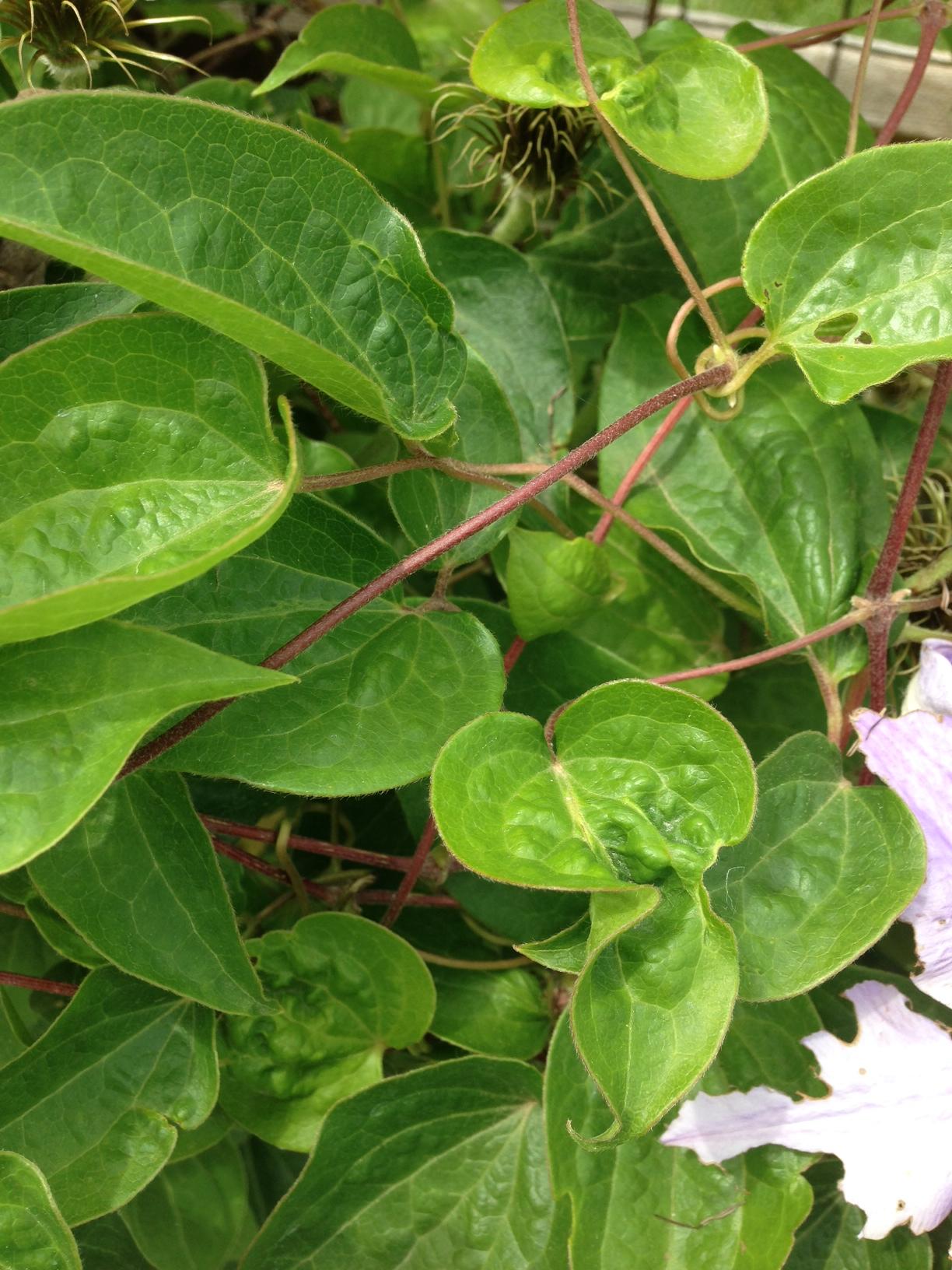 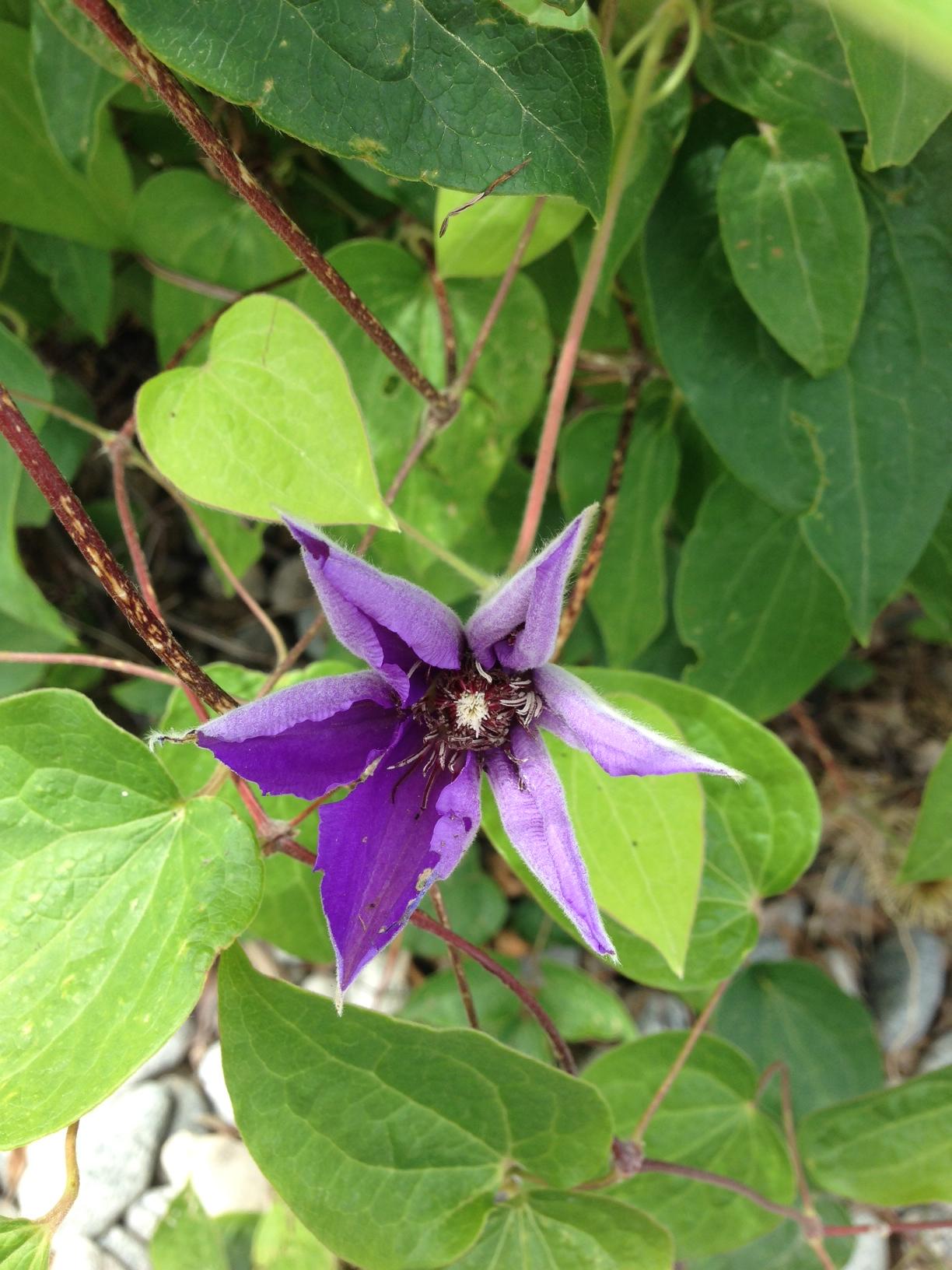 Looks like earwig damage to me. Earwigs would love that wood frame and rocks for hiding during the day. Pull the wood or rock away and look. Go out at night. Build a trellis for this clematis...get them off the ground for sure. Otherwise, they look perfectly healthy. Earwigs love the flowers.

UPDATE: Earwigs can also be good guys. They love to eat soft, new plant material such as new growth and flowers. As good guys they eat some of the bad insects. All you need to do is get that plant off the ground, get rid of all the earwig condominiums; the rock, the plastic, the debris, the lumber to reduce your problem drastically. Get a good decomposed mulch to cover the soil and roots of this clematis. I wouldn't use pesticide. There are leaves that are distorted because of earlier damage, flower petals ruined but the rest of the plant looks very healthy. A good green color, glossy and it has supported a lot of flowers and seed to boot. Are any of your other plants being eaten by this community of earwigs?

To manage their population a bit further, get newspaper, rolled up and soaked in water. Lay it out around your property and in the mornings gather them up and discard. I've cleaned up the debris and condominiums and the newspaper wasn't necessary.

Let us know and show a picture of what you've done with this information!

That is a clematis. The flowers look as though they have sustained slug earwig damage, but that isn't the reason for their fading/falling off. This clematis is almost finished blooming, and the petals should fall off naturally at this stage. Notice that the entire flower doesn't fall, but only the petals. This is natural. The center will continue to grow, and will eventually form a seed head.

Also, the leaf damage looks like a curl rather than a wilt. This type of curl is generally caused by the piercing or sucking group of insects during plant growth. The first ones that come to mind are: spider mites, aphids, thrips, leafhoppers, scale insects, and tarnished plant bugs. Most general insecticides will be effective against these, but if you have scale, you will have to treat with a horticultural oil, in an attempt to suffocate the insects.

Those insects could also make the plant wilt. The fertilizer isn't the issue here. Look for insects on the plant. They will be very small, and depending on the species, they will move deep inside the plant when you disturb the foliage. Some insects, though, will remain on the undersides of the leaves, where they feed. Once you find an insect, you can choose how to treat from there.

For the slugs, I would recommend a trap rather than a poison/bait, because some slug poisons are toxic to birds, which may eat the slugs.

In general, your plant looks rather dense, which explains why parasitic insects would be attracted. Next winter, you could try to thin out the weak and unnecessary vines, to thin it out a little and increase air flow. The rain (which these insects hate) will also penetrate the plant better.

The plants in the picture look like clematis to me. It doesn't appear to be disease. Now that you added the info on fertilizing the lawn it is possible that it might have some damage if fertilizer got on the leaves and blooms. Lawn fertilizers tend to be high in nitrogen and too much nitrogen I believe may cause blooms to drop.

Another issue may be inconsistent watering. If the plants are allowed to go dry for too long it will also cause blooms to drop.

The plants do not appear to be suffering from clematis wilt, the most common disease for these plants. Some of the markings on the stems make me think there might have been some insect damage

I know you've accepted an answer, but here's a bit of extra information - clematis do much better if given a support to climb up. Because of the way they climb, they need something with thin struts, about the thickness of a pea stick, or use clematis mesh. There is a new range of shorter growing clematis (Boulevard group) which can be grown as front of border plants and left to scramble where they will, and maybe these are those, but there is a significant drawback; clematis left to scramble on the ground are highly prone to pest attack - earwigs, slugs, snails, and various other beasties. And that is what has happened here, as J. Musser says, the damage is unrelated to your fertilising the lawn.

Not the answer you're looking for? Browse other questions tagged diseases vines or ask your own question.

7
What's causing my cucumber & melon vines to wither away?
3
What is the white stuff on this cactus-type plant?
5
How to treat a Jade plant with yellow leaves and holes in its leaves?
7
Dying Lawn - brownish/white with moss and clumps
5
How to save dying vine
8
Pinus sylvestris yellowing problem
4
Why has 20% of my pumpkin plant suddenly died and how can I save it?
2
Unexpected wilting and leaves curling in a serrano pepper plant